The Trombley House (or Tromble House) was constructed as a house and trading post, and is now located at 901 John F. Kennedy Drive in Veterans Memorial Park in Bay City, Michigan. The building is also known as the Centre House (or Center House). It was listed on the National Register of Historic Places in 1973. [1] It is the oldest frame house still standing in Bay County. [2]

Medor and Joseph Trombley, both French-Canadian fur traders, settled in the Saginaw Valley in the early 1830s and purchased large tracts of land along the Saginaw River between what is now Twenty-third Street and Cass Avenue in Bay City. In 1835, they began construction on this house, hiring Nathan C. Case, a carpenter, to construct it. The house at that time was located on the east side of the river, at what is now 114-118 Webster Street. The house was completed in 1837. The Trombleys used the building as a house, as a place to conduct their trading business, and as an inn of sorts. In the early 1840s, the Trombleys sold the house to James McCormick, Medor Trombley's father-in-law. McCormick remodeled it into a family residence, and lived there until his death in 1846. His wife Ellen continued to live there until her death in 1854. Medor Trombley and his wife Sara McCormick Trombley moved in in 1847. [3]

After Ellen McCormick's death in 1854, Medor Trombley again took ownership of the house, and held onto it until 1899. [4] During this time, the house also served as an inn or hotel, with out-of-town businessmen staying there. It was known variously as the "River House," the "Big House," or the "Centre House." [3]

In 1899 the house passed to Mader's daughter Mary E. Rose. In 1905, she sold it to Frederick Johnson, and around this time the house was divided into three units. Over the next 75 years, the house changed ownership 12 more times. [4] In 1981, the owner of the Trombley House wished to clear the site to make a parking lot for the adjacent business. Rather than being demolished, the house was ferried to the present location in Veterans Memorial Park on the other side of the Saginaw River. [3] The current site more accurately reflects the original setting of the house when it was constructed than the original site, now substantially industrial in nature, did. [3] The house is currently being renovated under the guidance of the Trombley/Centre House Committee. [2]

The Trombley House is a two-story rectangular frame Greek Revival structure, measuring 25-1/2 feet by 35-1/2 feet. [3] It has a gabled roof. Each story of the front has five openings. The entrance is in the center, and is flanked with fluted pilasters and topped with a cornice. [5]

According to McCormick family oral history, the original Webster Street location of the Trombley House was at the edge of extensive Indian mound containing skeletons, broken pottery, stone knives, stone axes, stone arrowheads, and stone spears. Some of these were donated by the McCormicks to several museums, including the Smithsonian Institution. [3] Archaeological excavations at the site (designated 20BY70) were undertaken in 1981. These excavations found over 1000 historical artifacts, and also identified prehistoric artifacts. The prehistoric artifacts largely dated to the Late Woodland period (after 1000 AD, although some may be as early as pre-500 AD. [5]

The Pinson Mounds comprise a prehistoric Native American complex located in Madison County, Tennessee, in the region that is known as the Eastern Woodlands. The complex, which includes 17 mounds, an earthen geometric enclosure, and numerous habitation areas, was most likely built during the Middle Woodland period. The complex is the largest group of Middle Woodland mounds in the United States. Sauls' Mound, at 72 feet (22 m), is the second-highest surviving mound in the United States. 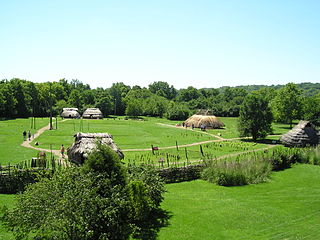 SunWatch Indian Village / Archaeological Park, previously known as the Incinerator Site, and designated by the Smithsonian trinomial 33-MY-57, is a reconstructed Fort Ancient Native American village next to the Great Miami River on West River Road in Dayton, Ohio. The dwellings and site plan of the 3-acre (1.2 ha) site are based on lengthy archeological excavations sponsored by the Dayton Society of Natural History, which owns and operates the site as an open-air museum. Because of its archaeological value, the site was listed in 1974 on the National Register of Historic Places. Since that time, as the many years of archaeological research at the site have led to important findings about the Fort Ancient culture, SunWatch Indian Village was designated in 1990 as a National Historic Landmark.

The Grand Village of the Illinois, also called Old Kaskaskia Village, is a site significant for being the best documented historic Native American village in the Illinois River valley. It was a large agricultural and trading village of Native Americans of the Illinois confederacy, located on the north bank of the Illinois River near the present town of Utica, Illinois. French explorers Louis Joliet and Father Jacques Marquette came across it in 1673. The Kaskaskia, a tribe of the Illiniwek people lived in the village. It grew rapidly after a mission and fur trading post were established there in 1675, to a population of about 6,000 people in about 460 houses. Around 1691 the Kaskaskia and other Illiniwek moved further south, abandoning the site due to pressure from an Iroquois invasion from the northeast.

The Perin Village Site is an archaeological site in the southwestern part of the U.S. state of Ohio. Located in Newtown in Hamilton County, it is believed to have been inhabited by peoples of the Hopewell tradition.

The Old Stone Fort is a prehistoric Native American structure located in Coffee County, Tennessee, in the Southeastern United States. The structure was most likely built between 80 and 550 AD during the Middle Woodland period. It is the most complex hilltop enclosure found in the South and was likely used for ceremonial purposes rather than defense. 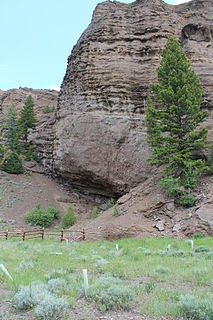 Mummy Cave is a rock shelter and archeological site in Park County, Wyoming, United States, near the eastern entrance to Yellowstone National Park. The site is adjacent to the concurrent U.S. Routes 14/16/20, on the left bank of the North Fork of the Shoshone River at an altitude of 6,310 feet (1,920 m) in Shoshone National Forest.

The C.H. Nash Museum at Chucalissa is located on and exhibits excavated materials of the Mississippian culture archaeological site known as Chucalissa which means "abandoned house" in Choctaw. The site is located adjacent to the T. O. Fuller State Park within the city of Memphis, Tennessee, United States. Chucalissa was designated National Historic Landmark in 1994 due to its importance as one of the best-preserved and major prehistoric settlement sites in the region.

The Sommerheim Park Archaeological District includes a group of six archaeological sites west of Erie, Pennsylvania in the United States. The sites are in Sommerheim Park, one of the few undeveloped areas of the Lake Erie shoreline, in Millcreek Township. This district has been listed on the National Register of Historic Places. This is one of the leading archaeological sites in the Erie area and along the southern shoreline of Lake Erie, due to the amount of artifacts and the lack of disturbance on the site.

Old Town is an archaeological site in Williamson County, Tennessee near Franklin. The site includes the remnants of a Native American village and mound complex of the Mississippian culture, and is listed on the National Register of Historic Places (NRHP) as Old Town Archaeological Site (40WM2).

Pharr Mounds is a Middle Woodland period archaeological site located near Tupelo in parts of Itawamba and Prentiss counties in northern Mississippi. This complex was made of earthwork mounds.

The Bynum Mound and Village Site (22CS501) is a Middle Woodland period archaeological site located near Houston in Chickasaw County, Mississippi. The complex of six burial mounds was in use during the Miller 1 and Miller 2 phases of the Miller culture and was built between 100 BC and 100 AD. It was listed on the National Register of Historic Places in 1989 as part of the Natchez Trace Parkway at milepost 232.4.

Mantle's Cave is a cliff alcove in Dinosaur National Monument in Moffat County, Colorado. Located in the Castle Park region of the park, it is the largest rock shelter in the area. It was discovered before 1921 by local ranchers, Mr. and Mrs. Charles Mantle. Mrs. Mantle is reported to have done some excavation of the site, followed up by the Penrose-Taylor expedition of 1933 from Colorado College and the Fountain Valley School, which designated the site "Cave One." The site is a significant resource for the Fremont culture and is among the best resources in northwestern Colorado. Excavations in the 1930s and 1940s yielded significant material on the Fremont people and their relationship to the later Ancestral Puebloans.

The Platte River Campground Site, designated 20BZ16, is an archaeological site located along the Platte River, within the Sleeping Bear Dunes National Lakeshore near Empire, Michigan. It is significant as a largely intact record of prehistoric life over a long span of time. It was listed on the National Register of Historic Places in 1990. 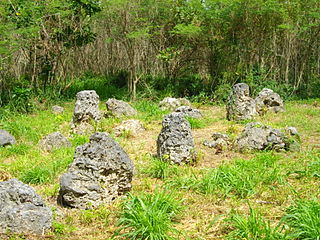 The Laulau Kattan Latte Site is a prehistoric archaeological site on the island of Saipan in the Northern Mariana Islands. Located near the shore of Laulau Bay, it is a small village site containing the remains of four latte stone house foundations, and an extensive scattering of pottery artifacts. When first reported by the pioneering archaeologist Alexander Spoehr in the 1940s, the latte stones were described as mostly fallen over and extremely weathered.

Located in Porter County, Indiana one of the few places the Kankakee Marsh could be easily crossed. The site has been occupied for over 11,000 years with evidence of human occupation from 1,000 B.C.E. Historic records of humans occupation in northwestern Indiana are available from the late seventeenth century. The prehistoric and historic cultural deposits are unique for northwestern Indiana. Prehistoric artifacts from the site represent most time periods over the last nine to ten thousand years and historic artifacts span the full range of historic occupations in northwestern Indiana. Prehistoric archaeological features documented at the site include two different types of roasting pits and small features whose functions are unknown. Historic features include the remains of a fireplace, post molds, and what is now thought to be a cellar marks the location of a previously undocumented structure. Concentrations of animal bones from the early nineteenth century indicate furs were processed at the site.

The Moccasin Bluff Site is an archaeological site located along Red Bud Trail and the St. Joseph River north of Buchanan, Michigan. It was listed on the National Register of Historic Places in 1977, and has been classified as a multi-component Prehistoric site with the major component dating to the Late Woodland/Upper Mississippian period.

The Schmidt Site, also designated 20SA192, is an archaeological site located just south of the Cass River near Bridgeport, Michigan. It was listed on the National Register of Historic Places in 1973.

Dry Creek Rockshelter near Boise, Idaho, is an archaeological site showing periodic use over approximately 3000 years. The site is located under a sandstone overhang, roughly 21 metres (69 ft) wide by 4 metres (13 ft) deep. The rockshelter is unique in that no other local sandstone outcrops are large enough for human habitation. The site was added to the National Register of Historic Places in 1991, and the site address is listed as restricted.

The Carcajou Point Site is located in Jefferson County, Wisconsin, on Lake Koshkonong. It is a multi-component site with Prehistoric Upper Mississippian Oneota and Historic components.