The Troy Lasater Service Station is a historic former automotive service station on Arkansas Highway 197 in New Blaine, Arkansas. It is a small single-story stone structure with a gabled roof, set in a small grassy area at the junction of AR 197 and Wood Lane. A cross gable is set above the entrance, which is on the left of the three-bay main facade. It was built in 1935 by Freeborn and Troy Lasater, and is a locally distinctive example of vernacular English Revival architecture. It was operated as a single-pump service station into the 1940s. [2]

The building was listed on the National Register of Historic Places in 2002. [1]

Jenkins' Ferry Battleground State Park is the site of the American Civil War battle of Jenkins' Ferry, also known as the Engagement at Jenkins' Ferry, fought on Saturday, April 30, 1864, in present-day Grant County, Arkansas. The park was listed in the U.S. National Register of Historic Places on January 21, 1970, and, with seven other sites, is part of the Camden Expedition Sites National Historic Landmark, designated a National Historic Landmark District on April 19, 1994.

New Blaine is an unincorporated community and census-designated place (CDP) in Logan County, Arkansas, United States. As of the 2010 census, its population was 174.

The Troy Gordon House is a historic house at 9 E. Township Road in Fayetteville, Arkansas. It is a modest single-story wood-frame structure, five bays wide, with a side gable roof and a stone foundation. The main entrance, centered on the symmetrical facade, is sheltered by a Doric gable-roofed portico whose columns are original to the house's 1851 construction. The house is one of the few remaining antebellum houses in Arkansas. 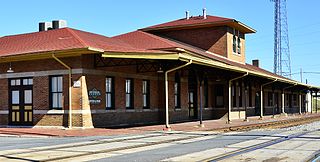 Union Station is a former railroad station at East 4th Ave. and State St. in Pine Bluff, Jefferson County, Arkansas. The station was originally at the union of the Cotton Belt and Iron Mountain railroads, and now houses the Pine Bluff/Jefferson County Historical Society museum. It is a single-story brick building, with a hip roof whose long eaves are supported by iron columns and half-truss brackets. The station was built in 1906 by the Iron Mountain Railroad. It had been a stop on the St. Louis Southwestern's Lone Star (Memphis-Dallas), and also on the railway's St. Louis-Dallas trains.

Harvey's Grocery and Texaco Station is a historic retail establishment at 3241 Arkansas Highway 24, between Camden and Chidester, Arkansas. The single-story concrete block building was built in 1940 by Henry Harvey, replacing a log structure that had previously housed his retail establishment. The building is one of the best-preserved examples of 1940s vernacular general stores and gas stations in the Camden area. The style of the building is, despite its modern construction materials, reminiscent of 19th century retail buildings, with a small windows placed high on the sides, and a full-width front porch. The Harveys pumped gas until 1979, after which the tanks were removed. Harvey's was also a locally notable stop for politicians on the stump in Arkansas: those who are known to have stopped here were Bill Clinton, David Pryor, and Jay Dickey. 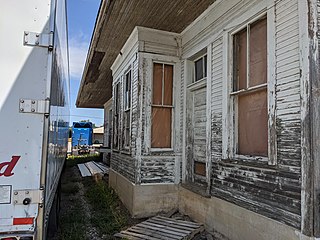 The Blytheville, Leachville and Arkansas Southern Railroad Depot-Leachville is a historic railroad station at the junction of 2nd and McNamee Streets in Leachville, Arkansas. It is a single-story wood-frame structure, with an asphalt roof and wide overhanging eaves. The telegrapher's station is in a small projection on the track side of the building. The station, which provided both passenger and freight service, was built in 1910 by the Blytheville, Leachville and Arkansas Southern Railroad, a small regional railroad seeking to provide additional means for area farmers to bring their products to a wider market.

The Esso Station was a historic former Esso automotive service station at 287 East Main Street in Piggott, Arkansas. It was a small single-story single-room stuccoed structure, with flanking shed-roofed restroom wings on either side. The main block was fronted by plate glass windows on either side of an entrance sheltered by a small shed-roof portico. It had distinctive Colonial Revival detailing, including a row of soldier bricks at the top of the foundation, and a modillioned cornice. The station was built in 1942. It was demolished sometime after August 2013.

The Smithville Public School Building is a historic school building on Arkansas Highway 117 in the small community of Smithville, Arkansas. It is a single-story T-shaped fieldstone structure with a cross-gable roof.

The Missouri and North Arkansas Depot is a historic railroad station at Center Street and Cash Streets in Bellefonte, Arkansas. It is a small single-story structure with a wide low-pitch gable-on-hip roof and a rubble-stone exterior over a wood frame. A small shed-roof addition enlarges the building slightly to the north, while a larger cross-gable addition projects from the rear. It was built in 1901 by the Missouri and North Arkansas Railroad to serve the area's passenger traffic. It is a rare example of rubble-over-frame construction for railroad stations in the region. 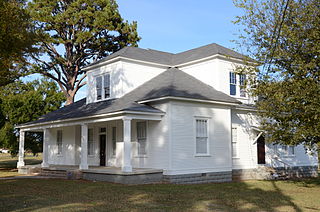 The Bryant-Lasater House is a historic house at 770 North Main Street in Mulberry, Arkansas. It is a ​1 1⁄2-story wood-frame structure, set on a foundation of molded concrete blocks, with a shallow-pitch pyramidal roof, and a hip-roof porch extending across the front. A rear porch has been enclosed. Built c. 1900, the house is locally distinctive for its architecture, as a particularly large example of a pyramid-roofed house, and for its historical role as the home of a succession of locally prominent doctors, including Dr. O. J. Kirksey, who operated a maternity hospital in the house.

The Magnolia Company Filling Station is a historic automotive service station building at 492 West Lafayette Street in Fayetteville, Arkansas. It is a small single-story white hip-roofed brick building, with a portico, supported by brick piers, extending over the area where the fuel pumps were originally located. The building has a center entrance, with a single sash window to the left, and a large window to the right. Built in 1925, it is one of the region's oldest surviving gas stations, and, according to its National Register nomination in 1978 was the only one then known to have been built by the Magnolia Company and to still be surviving.

The Ferguson Gas Station is a historic automotive service station at Center Street and United States Route 65 in Marshall, Arkansas. It is a small single-story structure, with sandstone walls and brick quoining at the corners and openings. It has a steeply pitched gable roof, with a slightly projecting cross gable above the entrance. The station was built about 1927 by Zeb Ferguson, in a style first popularized by the Pure Oil Company. 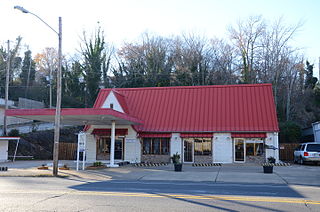 The Langdon Filling Station is a historic automotive service station at 311 Park Avenue in Hot Springs, Arkansas. It is a single-story masonry building, constructed out of concrete blocks and finished with brick veneer, and houses three service bays and a small office and storage area. The building has a steeply-pitched roof with rectangular vents in the English (Tudor) Revival style. Built about 1938, it was used as a service station into the 1990s.

The Samuel P. Taylor Service Station is a historic commercial building at 1123 West 3rd Street in Little Rock, Arkansas. Built in 1938, it is an excellent example of a period automotive filling station with Art Deco styling. It is a single-story L-shaped structure, with three service bays set at different angles, and an office in front. A zigzag pattern of black tiles extends across the building's cornice, and black tile is used prominently around the main entrance and below the office windows. 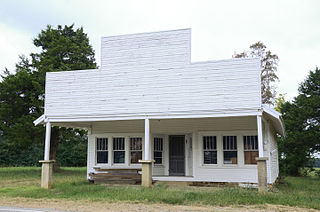 The Woodrow Store is a historic commercial building on Arkansas Highway 263 in rural northern Cleburne County, Arkansas. It is a modest single-story wood-frame building, set on the south side of the highway in the crossroads community of Woodrow. Built in 1927, it served as the only general store and automobile fuel service station for the isolated hill community for many years.

The Walter Patterson Filling Station is a historic automotive service station building on United States Route 65 in central Clinton, Arkansas. It is a small single-story brick building, with a steeply pitched gable roof. The front of the building is symmetrical, with a central entrance flanked by square single-pane display windows, and a cross-gable above the entrance. Built in 1936, it is the only gas station from that period to survive in the city, and is a good example of commercial English Revival architecture.

The Freeborn T. Lasater House is a historic house at 494 Arkansas Highway 197 in New Blaine, Arkansas. It is a single-story masonry structure, built out of uncoursed fieldstone, with petrified wood and Native American stone tools, discovered on the property, embedded at various points. It was built over a six-year period by Freeborn Lasater and his family, beginning in 1928, and is the small communities best example of Craftsman architecture.

The Magnolia Petroleum Company Filling Station is a historic automotive service station building at Larch and 1st Streets in Kingsland, Arkansas. It is a small single-story masonry building, built of red and buff brick and covered by a gabled roof. The front facade has a door on the left side and a plate glass window on the right. A concrete pad in front of the building originally supported the fuel pumps. The building was built about 1930, and is a good example of an early filling station with Tudor and Craftsman features, built to a Magnolia Company design which was used for at least one other filling station, in North Little Rock.