Jens Tryggve Herman Gran DSC , MC (20 January 1888 – 8 January 1980) was a Norwegian aviator, explorer and author. [2] He was the skiing expert on the 1910–13 Scott Antarctic Expedition and was the first person to fly across the North Sea in a heavier-than-air aircraft.

Tryggve Gran was born in Bergen, Norway, growing up in an affluent family dominant in the shipbuilding industry. His great-grandfather Jens Gran Berle (1758–1828), had founded a shipyard in the Laksevåg borough of the city of Bergen. His father, the shipyard owner, died when Tryggve was only five years old. In 1900, after school in Bergen and Lillehammer, Gran was sent to a school in Lausanne, Switzerland for a year, where he learned some German and French. Three years later, he met the German emperor, Wilhelm II, a common guest with the families of Tryggve's friends. Meeting the emperor made an impact on the then 14-year-old boy, who from that moment on wanted to become a naval officer. At this time, he had several years behind him as a member of the Nygaards Battalion, one of Bergen's buekorps. He entered naval college in 1907 and graduated in the spring of 1910. [3]

Gran took an interest in science and exploration which in 1910 led to Fridtjof Nansen recommending his services to Robert Falcon Scott, who was in Norway at the time preparing for an expedition to the Antarctic and testing the motor tractor he intended to take with him. Scott was impressed with Gran, who was an expert skier, and Nansen convinced Scott to take Gran as ski instructor to Scott's men for the Terra Nova Expedition.

Arriving in Antarctica in early January 1911, Gran was one of the 13 expedition members involved in the laying of the supply depots needed for the attempt to reach the South Pole later that year. From November 1911 to February 1912, while Scott and the rest of the Southern party were on their journey to the Pole, Gran accompanied the geological expedition to the western mountains led by Griffith Taylor.

In November 1912, Gran was part of the 11-man search party that found the tent containing the dead bodies of the past South Pole party. After collecting the party's personal belongings the tent was lowered over the bodies of Scott and his two companions and a 12-foot snow cairn was built over it. A pair of skis were used to form a cross over their grave. Gran travelled back to the base at Cape Evans wearing Scott's skis, reasoning that at least Scott's skis would complete the journey. Before leaving Antarctica he made an ascent of Mount Erebus with Raymond Priestley and Frederick Hooper in December 1912, an occasion which nearly ended in disaster when an unexpected eruption caused a shower of huge pumice blocks to fall around him. On 24 July 1913 Gran was awarded the Polar Medal by King George V. [4]

On his return voyage, Gran met aviator Robert Loraine, the first pilot to cross the Irish sea, and immediately took an interest in aviation. Gran became a skilled pilot at Louis Blériot's aviation school in Paris, and on 30 July 1914, Gran became the first pilot to cross the North Sea. [5] Taking off in his Blériot XI-2 monoplane, Ca Flotte, from Cruden Bay, Scotland, Gran landed 4 hours 10 minutes later at Jæren, near Stavanger, Norway, after a flight of 320 miles (510 km).The restored, but complete and original plane is on display at the Norwegian Technical Museum in Oslo, Norway. [6]

Only five days later, the United Kingdom entered the First World War. Gran, now a first lieutenant in the Norwegian Army Air Service, volunteered for service with the Royal Flying Corps. He was rejected because of Norway's neutrality. However, the rejection did not stop Gran. Under the identity of "Captain Teddy Grant" of Canada, he was admitted to the RFC, serving in 1916 with No. 39 Squadron on Home Defence.

Gran was commissioned into the Royal Flying Corps under his own name as a probationary temporary second lieutenant on 1 January 1917, [7] confirmed in the rank and appointed a flying officer on 1 March 1917, [8] and was posted to No. 70 Squadron, flying the Sopwith Camel on the Western Front.

He was appointed a flight commander on 1 January 1918 with the rank of acting-captain, [9] and in March his seniority as second lieutenant was backdated to 1 January 1917. [10] Soon after he was awarded the Military Cross. [11] His citation reading:

T./Capt. Tryggve Gran, Gen. List and R.F.C.
For conspicuous gallantry and devotion to duty. He bombed enemy aerodromes with great success, and engaged enemy searchlights, transport and other targets with machine-gun fire. He invariably showed the greatest determination and resource. [12]

He was promoted to acting-major on 10 September 1918. [13] and commanded various Royal Air Force units in Arkhangelsk and North Russia during the Allied intervention in 1919. Gran was temporarily transferred to unemployed list on 26 April 1919, [14] but on 1 August was granted a permanent commission in the RAF with the rank of captain, [15] however, this was then cancelled on 2 December 1919. [16] Gran finally relinquished his commission on 6 August 1921. [17]

Gran himself claimed to have shot down German ace Hermann Göring in a dogfight on 8 or 9 September 1917. He discovered this when he became acquainted with Göring after the war, and compared his flight logs with Göring's. It could however not be verified that it was Gran who shot down Göring's plane.

After the war, Gran started holding lectures on aviation and his journeys to the polar areas, as well as writing books. In 1919 he was the first man to fly from London to Stockholm. In 1928, he led a search party to find polar explorer Roald Amundsen, lost flying while trying to discover the fate of Umberto Nobile's North Pole expedition on board the Airship Italia .

During the Second World War, Gran was reportedly a member of Nasjonal Samling (NS), Vidkun Quisling's collaborationist party. The NS used Gran's hero-like status in their war propaganda, and in 1944, a commemorative stamp was issued to mark the 30th anniversary of Gran's flight across the North Sea. It has been speculated Gran feared reprisals from the pro-German fascist party because of his commitment to the Royal Air Force in the First World War. Others have speculated that his friendship with Göring and bitterness over not being offered a full-time job in the Norwegian Army Air Service may have been reasons for Gran to support the NS during the Nazi occupation of Norway.

After a trial in 1948, Gran was found guilty of treason and sentenced to a prison term of 18 months. The remainder of his life was devoted principally to writing books.

Gran was also a gifted football player, earning one cap for Norway in 1908. This was Norway's first ever international match, and was played against Sweden in Gothenburg. Sweden beat Norway 11–3.

Tryggve Gran died in his home in Grimstad, Norway on 8 January 1980 aged 91. A memorial was unveiled in Cruden Bay during 1971.

Wing Commander Norman Macmillan was a Scottish officer of the Royal Air Force, a World War I flying ace, test pilot, and author.

Percy Jack Clayson was a British flying ace in the First World War credited with 29 victories.

Major Victor Henry Huston was a World War I flying ace credited with six aerial victories. He was the only ace in his squadron.

Captain Ian Donald Roy McDonald was a British World War I flying ace credited with 20 aerial victories. Although born in the British West Indies, he returned to England to serve in the air force. After his successful career in combat, he spent a short while at home before returning to the colours. He served in Iraq postwar, and was executed there by insurgents.

Lieutenant Colonel Spencer Bertram Horn was a British soldier and World War I flying ace credited with thirteen aerial victories. Although seconded to aviation duty during the First World War, he returned to his Dragoon Guards regiment after the war ended. Horn then served in India in the 1920s and 1930s, while his cavalry unit modernised to tanks. Horn would serve in India during the Second World War, and retire from active duty on 3 October 1946, and from the reserves on 15 November 1950.

Euan Dickson, was a British-born New Zealander bomber pilot and flying ace in the First World War. Serving with the Royal Naval Air Service (RNAS) and subsequently the Royal Air Force (RAF), he flew over 150 missions flying the D.H.4 aircraft. As well as flying so many bombing missions he, and his observer, was also credited with shooting down 14 enemy aircraft. After the war he returned to New Zealand and was the first person to fly across the Cook Strait.

Captain Maxwell Hutcheon Findlay was a World War I flying ace credited with 14 aerial victories. He remained in the RAF postwar for several years before going on to a civilian aviation career that ended with his death in the Johannesburg Air Race of 1936. 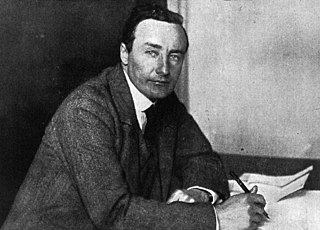 Lieutenant-Colonel Alexander "Alec" Ogilvie CBE was an early British aviation pioneer, a friend of the Wright Brothers and only the seventh British person to qualify as a pilot. During World War I Ogilvie served with the Royal Naval Air Service before transferring to the Royal Air Force on its creation in 1918. During the War he was chiefly employed in technical posts and after the War he worked as a consulting aeronautical engineer.

Lieutenant Charles Henry Arnison was a British World War I flying ace credited with nine aerial victories. He won the Military Cross for valour in World War I, and returned to the RAF to serve in World War II.

Air Vice Marshal John Denis Breakey & Bar was a senior officer of the Royal Air Force. He began his military career in the Royal Naval Air Service during the First World War. As the RNAS was merged into the Royal Air Force, he scored nine aerial victories as a fighter pilot. He served throughout the interwar period and into the Second World War, rising to air vice marshal.

Captain Frederick Dudley Travers was an English World War I flying ace credited with nine aerial victories. His later life saw his continued service to his nation in both the Royal Air Force Volunteer Reserve and in civil aviation. He pioneered air routes into Africa, the Middle East, and India. He also became proficient in piloting flying boats. He flew civilian aircraft into the war zones during World War II. By the end of his civil aviation career, he had flown over two million miles and logged 19,000 accident-free flying hours. Upon his retirement from the RAF, he had served for almost four decades.

Captain William Thomas Price was a World War I flying ace who hailed from Warwickshire, England. He was credited with seven aerial victories at a time when British aviation was suffering its heaviest casualties of the war. After leaving military service, he devoted his life to teaching agriculture until his retirement in 1962.