Zante currants, Corinth raisins, Corinthian raisins, or simply currants outside of the US, are dried berries of the small, sweet, seedless grape cultivar Black Corinth ( Vitis vinifera ). [1] [2] The name comes from the Anglo-French phrase "raisins de Corinthe" (grapes of Corinth) [3] and the Ionian island of Zakynthos (Zante), which was once the major producer and exporter. It is not related to black, red or white currants, which are berries of shrubs in the genus Ribes and not usually prepared in dried form.

The currant is one of the oldest known raisins. The first written record was in 75 AD by Pliny the Elder, who described a tiny, juicy, thick-skinned grape with small bunches. The next mention is a millennium later, when the raisins became a subject of trade between Venetian merchants and Greek producers from Ionian coasts. In the 14th century, they were sold in the English market under the label Reysyns de Corauntz, and the name raisins of Corinth was recorded in the 15th century, after the Greek harbor which was the primary source of export. Gradually, the name got corrupted into currant. However, by the 17th century, trade shifted towards the Ionian islands, particularly Zakynthos (Zante), at which time it was named Zante currant. [4]

The first attempts to introduce the Black Corinth cultivar in the United States date back to 1854. The first successful vineyards of White and Red Corinth (related varieties), were established in California in 1861 by Colonel Ágoston Haraszthy. Around 1901, David Fairchild of USDA imported high-quality black currant cuttings from the Greek village of Panariti, a renowned producer, and established the first commercial crops. However, because of the higher popularity of Thompson Seedless, American production remained modest up to 1920s and 1930s, after which its popularity increased due to the higher prices it could bring and improved cultivation practices (girdling). The plantings reached 3,000 acres (1,200 ha) by 1936, which is approximately its current level. [4]

In wild grapes, the species is dioecious; the sexes grow on separate vines with male flowers on one plant, and female flowers on another. Black Corinth is an "almost male" variety in that the flowers have well-developed anthers (male), but only tiny underdeveloped ovaries (female). [5]

To yield sufficient fruit, Black Corinth grapes need to be carefully managed. In ancient times, girdling was a standard practice to increase the set and size of seedless grapes, until the discovery of the plant hormone gibberellic acid, and its ability to do the same thing with less labor. Historically, Black Corinth stock was probably kept for its pollen-producing abilities, so other female flowered varieties (with naturally higher yields) would set full crops. [5]

The Black Corinth cultivar is also reputed to be very prone to powdery mildew, and is susceptible to numerous other diseases such as downy mildew and black rot. [5]

Greece is still the primary producer of currants, amounting to about 80% of total world production, with California, South Africa and Australia sharing most of the remainder. [4]

Dried currants have been a key ingredient of British cuisine for centuries, having been imported from the Mediterranean as sweet luxury goods long before sugar became widely available in the eighteenth and nineteenth centuries. Alongside raisins and sultanas they feature heavily in a wide variety of traditional recipes from fruitcake, currant buns, teacakes, Eccles cakes, Saffron cake, bread and butter pudding, spotted dick, Welsh cakes, Bara brith, Christmas pudding and mince pies and are often sold in mixtures as "mixed dried fruit". Typically dried, they are used especially in baking and are a major ingredient of currant slice (or currant square) and currant cake. They are usually called simply "currants", except in the US where they are called 'Zante currants' and in many anglophone countries are used in traditional baked goods and puddings.

Unlike black currants, Zante currants are not a significant source of vitamin C. [6] The fresh fruit of Zante raisins is very small and sweet, with quite an intense flavour for a grape. Black Corinth, White Corinth, and Red Corinth are often marketed under the name "Champagne grapes" in U.S. speciality stores, but despite the name, they are not used for making Champagne.

Along with grapes and raisins, Zante currants are nephrotoxic to dogs and birds. This toxicity manifests as kidney failure and can be seen in relatively small doses. [7]

A grape is a fruit, botanically a berry, of the deciduous woody vines of the flowering plant genus Vitis.

A berry is a small, pulpy, and often edible fruit. Typically, berries are juicy, rounded, brightly colored, sweet, sour or tart, and do not have a stone or pit, although many pips or seeds may be present. Common examples are strawberries, raspberries, blueberries, blackberries, red currants, white currants and blackcurrants. In Britain, soft fruit is a horticultural term for such fruits.

A raisin is a dried grape. Raisins are produced in many regions of the world and may be eaten raw or used in cooking, baking, and brewing. In the United Kingdom, Ireland, New Zealand, and Australia, the word "raisin" is reserved for the dark-colored dried large grape, with "sultana" being a golden-colored dried grape, and "currant" being a dried small Black Corinth seedless grape. 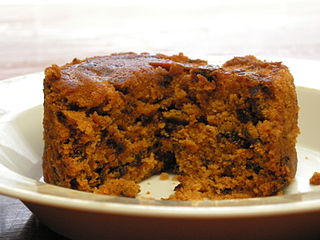 Spotted dick is a traditional British pudding, traditionally made with suet and dried fruit and often served with custard. Non-traditional variants include recipes that replace suet with other fats, or that include eggs to make something similar to a sponge pudding or cake. 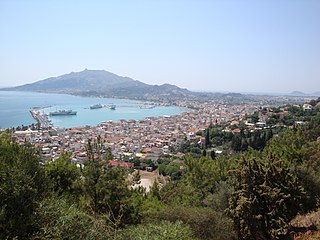 Zakynthos or Zante is a Greek island in the Ionian Sea. It is the third largest of the Ionian Islands. Zakynthos is a separate regional unit of the Ionian Islands region, and its only municipality. It covers an area of 405.55 km2 (156.6 sq mi) and its coastline is roughly 123 km (76 mi) in length. The name, like all similar names ending in -nthos, is pre-Mycenaean or Pelasgian in origin. In Greek mythology the island was said to be named after Zakynthos, the son of the legendary Arcadian chief Dardanus.

Currant may refer to:

The Muscat family of grapes includes over 200 grape varieties belonging to the Vitis vinifera species that have been used in wine production and as raisin and table grapes around the globe for many centuries. Their colors range from white, to yellow, to pink to near black. Muscat grapes and wines almost always have a pronounced sweet floral aroma. The breadth and number of varieties of Muscat suggest that it is perhaps the oldest domesticated grape variety, and there are theories that most families within the Vitis vinifera grape variety are descended from the Muscat variety.

The sultana is a "white", oval seedless grape variety also called the sultanina, Thompson Seedless, Lady de Coverly (England), and oval-fruited Kishmish. It is also known as İzmir üzümü in Turkey since this variety has been extensively grown region around İzmir. It is assumed to originate from, which later became part of the Ottoman Empire. In some countries, especially Commonwealth countries, it is also the name given to the raisin made from it or from larger seedless grapes; such sultana raisins are often called simply sultanas or sultanis. These are typically larger than Zante currants, and the Thompson variety is smaller than many seeded raisins. In the US and Canada, the name "raisin" is applied to all dried grapes, so that the breakfast cereal known as "sultana bran" in Australia, New Zealand and the United Kingdom is called raisin bran in the United States and Canada. 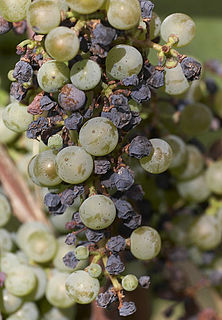 Grape black rot is a fungal disease caused by an ascomycetous fungus, Guignardia bidwellii, that attacks grape vines during hot and humid weather. “Grape black rot originated in eastern North America, but now occurs in portions of Europe, South America, and Asia. It can cause complete crop loss in warm, humid climates, but is virtually unknown in regions with arid summers.” The name comes from the black fringe that borders growing brown patches on the leaves. The disease also attacks other parts of the plant, “all green parts of the vine: the shoots, leaf and fruit stems, tendrils, and fruit. The most damaging effect is to the fruit”.

Stenospermocarpy is the biological mechanism that produces parthenocarpy (seedlessness) in some fruits, notably many table grapes.

Dried vine fruit is a term given to all the varieties of dried grape produced. The need for this term came from the fact that the United Kingdom is the only country in the European Union which differentiates dried vine fruit into different types. On mainland Europe, they are all simply called raisins, whereas in the UK they are differentiated into raisins, sultanas and currants. In this instance the term currant refers to the Zante currant, not the fruit of the Ribes genus.

Ribes aureum, known by the common names golden currant, clove currant, pruterberry and buffalo currant, is a species in the genus Ribes. It is native to Canada, most of the United States and northern Mexico. The variety Ribes aureum var. villosum is sometimes considered a full species, Ribes odoratum. 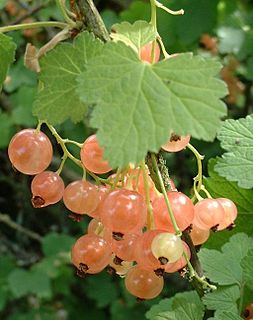 The white currant or whitecurrant is a group of cultivars of the red currant, a species of flowering plant in the family Grossulariaceae, native to Europe. It is a deciduous shrub growing to 1 m (3 ft) tall and broad, with palmate leaves, and masses of spherical, edible fruit (berries) in summer. The white currant differs from the red currant only in the colour and flavour of these fruits, which are a translucent white and sweeter. 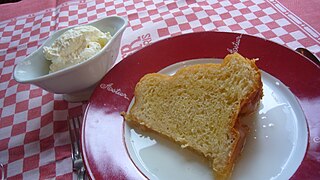 A rum cake is a type of dessert cake which contains rum. In most of the Caribbean, rum cakes are a traditional holiday season dessert, descended from the holiday puddings. Traditionally, dried fruit is soaked in rum for months and then added to dough prepared with sugar which has been caramelized by boiling in water. The result, also known as "black cake", is similar to a fruitcake, with a lighter texture.

Thomcord is a seedless table grape variety and a hybrid of the popular Thompson Seedless or Sultanina grape and Concord grape. Thomcord was developed in 1983 by Californian grape breeders working for the Agricultural Research Service (ARS), an agency of the United States Department of Agriculture (USDA), as part of a test to better understand a new seedless grape breeding procedure.

Blackcurrant, Ribes nigrum, is a woody shrub grown for its berries.

Plum cake refers to a wide range of cakes made with either dried fruit or with fresh fruit. There is a wide range of popular plum cakes and puddings. Since the meaning of the word "plum" has changed over time, many items referred to as plum cakes and popular in England since at least the eighteenth century have now become known as fruitcake. The English variety of plum cake also exists on the European mainland, but may vary in ingredients and consistency. Settlers in British colonies brought the dried fruit variety of cake with them, so that for example, in India it was served around the time of the Christmas holiday season and in the American colonies, where it became associated with elections, one version came to be called "election cake".

Autumn Royal is a seedless table grape variety first produced in California, and released in 1996. Its parentage includes many types of grapes, including Black rose, Calmeria, Flame Seedless and Ribier.