The Alfa Romeo 159 (Type 939) is a compact executive car manufactured and marketed by Alfa Romeo between 2005 and 2011. Introduced at the 2005 Geneva Motor Show, as a replacement for the 156, the 159 used the GM/Fiat Premium platform, shared with the Alfa Romeo Brera and Spider as well as the Kamal and Visconti concept cars.

The 159 placed third in the 2006 European Car of the Year awards. Production of the 159 ended in November 2011, with around 240,000 cars manufactured. The 159's late transition to what was fundamentally made as an E segment platform resulted in the 159 having excessive weight, a problem shared by the Brera coupé and Spider. [4]

The considerable growth in dimensions deterred many 156 owners from considering the 159 as a direct replacement model. [4] Thanks to its new platform, a high level of passive safety was achieved, and the torsional rigidity of the chassis reached 180.000 daNm/rad. [6]

The 159 was designed by Giorgetto Giugiaro in collaboration with the Centro Stile Alfa Romeo. The nose features a traditional Alfa Romeo V-shaped grille and bonnet, and cylindrical headlight clusters. Similar to its coupé counterpart, the front of the car was influenced by the 2002 Brera Concept also designed by Giugiaro.

A high waistline broadens until it reaches the rear "C" pillar. Several exterior design cues were intended to make the car appear larger, supposedly to appeal to potential buyers in the United States; where the 159 was ultimately never marketed. [4]

The interior recalls styling elements from earlier cars, including the 156, such as deeply recessed instruments angled toward the driver. Alfa Romeo intended for the 159 to compete more directly with BMW, Mercedes-Benz and Audi by using higher-quality interior materials. [4]

A Sportwagon variant was introduced at the Geneva Motor Show in March 2006. An automatic gearbox option for the 2.4 JTDM diesel model was also launched that year and later extended to other versions. In 2007, a four-wheel-drive diesel model was introduced, and the 2.4-litre diesel engines' power output was increased to 210 PS (154 kW; 207 hp), with a newly reintroduced TI trim level also available as an option.

For the 2008 model year, the mechanics and interiors of the 159 were further developed. A 3.2-litre V6 model was offered in front-wheel-drive configuration, achieving a top speed of 250 km/h (155 mph). All model variants were now equipped with Alfa Romeo's electronic "Q2" limited slip differential. As a result of newly introduced aluminium components, a 45 kilograms (99 lb) weight reduction was achieved. The revised 159 range was introduced at the Geneva Motor Show in March 2008. [7]

The 159 is fitted with seven airbags as standard, with additional knee airbags also available as an option. [13] The car performed well in rear end crash protection tests, [14] benefiting from "anti whiplash" seats. [13]

A car strongly resembling a 159 can be seen in multiple episodes of Psycho Pass .

The Fiat Punto is a supermini car produced by the Italian manufacturer Fiat from 1993 to 2018, spanning over three generations. The third generation of the car was marketed as the Grande Punto, between 2005 and 2009, and as the Punto Evo, between 2009 and 2012, when the single-word Punto name was reintroduced. As of May 2013, nearly nine million units had been sold globally. 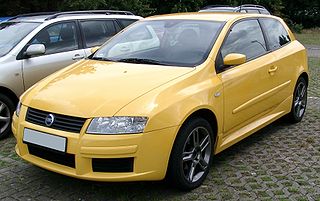 The Fiat Stilo is a small family car available as a three door and a five door hatchback, as well as an estate, produced by the Italian automaker Fiat. The Stilo three door and five door were launched in November 2001, at the Bologna Motor Show, to replace the Fiat Bravo/Brava, with the Stilo MultiWagon following in January 2003.

The Alfa Romeo 156 is a compact executive car produced by the Italian automobile manufacturer Alfa Romeo. It was introduced at the 1997 Frankfurt Motor Show as the replacement for the Alfa Romeo 155. The 156 received a positive reception and in the following year went on to win the 1998 European Car of the Year award. The 156 saloon was discontinued in Europe late in 2005, while the Q4 Crosswagon continued in production until the end of 2007. 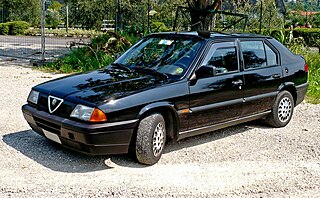 The Alfa Romeo 33 is a small family car produced by the Italian automaker Alfa Romeo between 1983 and 1995. From a mechanical standpoint it was essentially an evolution of its predecessor, the Alfasud, whose floorpan, chassis and drivetrain were carried over—albeit with modifications to the suspension and braking system. The Nissan-based Alfa Romeo Arna was launched shortly after, offering a similarly sized but lower priced car. 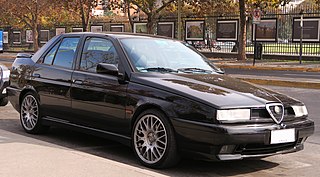 The Alfa Romeo 155 is a compact executive car produced by Italian automobile manufacturer Alfa Romeo between 1992 and 1997. It was unveiled in January 1992 at Barcelona, with the first public launch in March 1992, at the Geneva Motor Show. A total of 192,618 units were made before it was replaced by the 156.

The Alfa Romeo Brera and the Alfa Romeo Spider are mid-size sports cars using the GM/Fiat Premium platform, manufactured by Pininfarina and marketed by Alfa Romeo as a 2+2 coupé and roadster respectively. 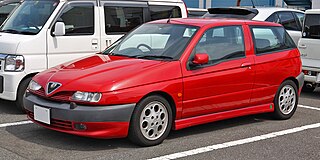 The Alfa Romeo 75, sold in North America as the Milano, is a compact executive car produced by the Italian automaker Alfa Romeo between 1985 and 1992. The Alfa 75 was commercially quite successful: in only three years, 236,907 cars were produced, and by the end of production in 1992, around 386,767 had been built. 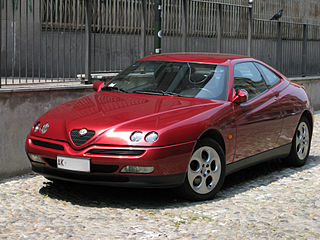 The Alfa Romeo GTV and the Alfa Romeo Spider were two sports cars produced by the Italian manufacturer Alfa Romeo from 1993 to 2004. The GTV is a 2+2 coupé, and the Spider is a two-seater roadster version of the GTV. Around 39,000 Spiders and 41,700 GTVs were built.

The Alfa Romeo GT is a coupe automobile that was produced by the Italian automaker Alfa Romeo between 2003 and 2010. The GT was introduced in March 2003 at the Geneva Motor Show. Production commenced on 28 November 2003, the GT was built at the Pomigliano plant, alongside the 147 and 159. A total of 80,832 units were produced.

Alfa Romeo Giulia is the name of three not directly related models by the Italian car manufacturer Alfa Romeo. The first is a line of sporty four-door compact executive cars produced from 1962 to 1978, the second is an updated, mainly up-engined Spider, Sprint and Sprint Speciale Giuliettas, and the third Giulia is a compact executive car unveiled in 2015. 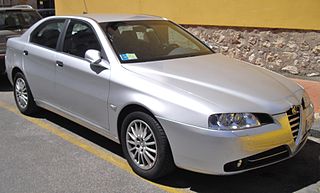 The Alfa Romeo 166 is an executive car produced by the Italian automaker Alfa Romeo, between October 1996 and June 2007. The car was designed by Centro Stile Alfa Romeo, under the control of Walter de Silva, and was facelifted in September 2003. 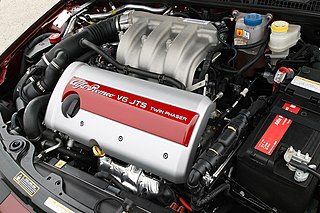 The JTS engine is a gasoline direct injection engine produced by Alfa Romeo. It exists in two forms, straight-4 and V6, and was introduced into the Alfa lineup in 2002.

The Alfa Romeo Giulietta is a small family car (C-segment) manufactured and marketed by Alfa Romeo as a 5-door hatchback. Production started near the end of 2009 and the model was introduced at the March 2010 Geneva Motor Show. In a viability plan forwarded to the US Government in February 2009, Chrysler reported that the 147 replacement would come to market as the Milano and that it could be built in the USA. However, as of early 2010 Fiat was instead planning to concentrate on bringing larger models to the US, such as the Giulia. The Giulietta placed second in the 2011 European Car of the Year awards. Between 2010 and 2019, production reached over 400,000. In 2020, Alfa Romeo announced that they were going to axe the Giulietta and production ended on 22 December 2020 spanning 10 years of sales from a period of 2010 to 2020.

The Alfa Romeo MiTo is a front-wheel drive, three-door supermini designed by Centro Stile Alfa Romeo and presented in 2008 at Castello Sforzesco in Milan with an international introduction at the British Motor Show in 2008. The MiTo was marketed across a single generation from 2008 to 2018, sharing the Fiat Small platform with the Fiat Grande Punto. Production reached 265,000 at FCA's Mirafiori plant.

The Aisin AW TF-8# SC series is a 6-speed automatic transmission designed for use in transverse engine applications and produced by Aisin Seiki. It is designed to handle a maximum of 450 N⋅m (331.9 ft⋅lbf) of torque. It is built in Anjō, Japan. It is also called the TF-80SC and TF-81SC (AF21).

The Alfa Romeo Giulia is a compact executive car produced by the Italian automobile manufacturer Alfa Romeo. It was unveiled in June 2015, with market launch scheduled for February 2016, and it is the first saloon offered by Alfa Romeo after the production of the 159 ended in 2011. The Giulia is also the first mass-market Alfa Romeo vehicle in over two decades to use a longitudinal rear-wheel drive platform, since the 75 which was discontinued in 1992. The Giulia was second in 2017 European Car of the Year voting and was named Motor Trend Car of the Year for 2018. In 2018, Giulia was awarded the Compasso d'Oro industrial design award.

The Alfa Romeo Stelvio is a compact luxury crossover SUV manufactured and marketed by the Alfa Romeo subdivision of Stellantis, first revealed at the 2016 Los Angeles Auto Show, and entering production at the Cassino Plant at the end of 2016. It is currently Alfa Romeo's best-selling model, with roughly 43,000 sold in 2018.