The Burmese name Bago (ပဲခူး) is likely derived from the Mon language place name Bagaw (Mon :ဗဂေါ, [həkɜ̀] ). Until the Burmese government renamed English place names throughout the country in 1989, Bago was known as Pegu. Bago was formerly known as Hanthawaddy (Burmese : ဟံသာဝတီ; Mon :ဟံသာဝတဳHongsawatoi; Pali : Haṃsāvatī; lit. "she who possesses the sheldrake"), the name of a Burmese-Mon kingdom.

Various Mon language chronicles report widely divergent foundation dates of Bago, ranging from 573 CE to 1152 CE [note 1] while the Zabu Kuncha , an early 15th century Burmese administrative treatise, states that Pegu was founded in 1276/77 CE. [2] Chinese sources mention Jayavarman VII adding Pegu to the territory of the Khmer Empire in 1195. [3] The earliest extant evidence of Pegu as a place dates only to the late Pagan period (1212 and 1266) [note 2] when it was still a small town, not even a provincial capital. After the collapse of the Pagan Empire, Bago became part of the breakaway Kingdom of Martaban by the 1290s.

The small settlement grew increasingly important in the 14th century as the region became most populous in the Mon-speaking kingdom. In 1369, King Binnya U made Bago the capital. The city remained the capital until the kingdom's fall in 1538.

During the reign of King Razadarit, Bago and Ava Kingdom were engaged in the Forty Years' War. The peaceful reign of Queen Shin Sawbu came to an end when she chose the Buddhist monk Dhammazedi (1471–1492) to succeed her. Under Dhammazedi, Bago became a centre of commerce and Theravada Buddhism.

In 1519, António Correia, then a merchant from the Portuguese casados settlement at Cochin landed in Bago, then known to the Portuguese as Pegu, looking for new markets for pepper from Cochin. [4] [5] A year later, Portuguese India Governor Diogo Lopes de Sequeira sent an ambassador to Pegu.

As a major seaport, the city was frequently visited by Europeans, among these, Gasparo Balbi and Ralph Fitch in the late 1500s. The Europeans often commented on its magnificence.

The Portuguese conquest of Pegu, following the destruction caused by the kings of Tangot and Arrakan in 1599, was described by Manuel de Abreu Mousinho in "Breve discurso em que se conta a conquista do Reino do Pegú na India oriental feita pelos portugueses em tempo do vice-rei Aires de Saldanha, sendo capitão Salvador Ribeiro de Sousa, chamado Massinga, natural de Guimarães, a quem os naturais do Pegú elegeram por seu rei no ano de 1600" (Brief narrative telling the conquest of Pegu in eastern India made by the Portuguese in the time of the viceroy Aires de Saldanha, being captain Salvador Ribeiro de Sousa, called Massinga, born in Guimarães, elected as their king by the natives in the year 1600), published from 1711 to 1829 with "Peregrinaçam" of Fernão Mendes Pinto.

The capital was looted by the viceroy of Toungoo, Minye Thihathu II of Toungoo, and then burned by the viceroy of Arakin during the Burmese–Siamese War (1594–1605). Anaukpetlun wanted to rebuild Hongsawadi, which had been deserted since Nanda Bayin had abandoned it. He was only able to build a temporary palace, however. [6] :151–162,191

The Burmese capital relocated to Ava in 1634. In 1740, the Mon revolted and founded the Restored Hanthawaddy Kingdom. However, a Bamar king, Alaungpaya, captured the city in May 1757.

Bago was rebuilt by King Bodawpaya (r. 1782-1819), but by then the river had shifted course, cutting the city off from the sea. It never regained its previous importance. After the Second Anglo-Burmese War, the British annexed Bago in 1852. In 1862, the province of British Burma was formed, and the capital moved to Yangon. The substantial differences between the colloquial and literary pronunciations, as with Burmese words, was a reason of the British corruption "Pegu".

In 1911, Hanthawaddy was described as a district in the Bago (or Pegu) division of Lower Burma. It lay in the home district of Yangon, from which the town was detached to make a separate district in 1880. It had an area of 3,023 square miles (7,830 km2), with a population of 48,411 in 1901, showing an increase of 22% in the past decade. Hanthawaddy and Hinthada were the two most densely populated districts in the province.

Hanthawaddy, as it was constituted in 1911, consisted of a vast plain stretching up from the sea between the mouth of the Irrawaddy River and the Pegu Range. Except the tract of land lying between the Pegu Range on the east and the Yangon River, the country was intersected by numerous tidal creeks, many of which were navigable by large boats and some by steamers. The headquarters of the district was in Rangoon, which was also the sub-divisional headquarters. The second sub-division had its headquarters at Insein, where there were large railway works. Cultivation was almost wholly confined to rice, but there were many vegetable and fruit gardens.

Today, Hanthawaddy is one of the wards of Bago city.

Alaungpaya was the founder of the Konbaung Dynasty of Burma (Myanmar). By the time of his death from illness during his campaign in Siam, this former chief of a small village in Upper Burma had unified Burma, subdued Manipur, conquered Lan Na and driven out the French and the British who had given help to the Restored Hanthawaddy Kingdom. He added settlements around Dagon, and called the enlarged town Yangon.

Mon kingdoms were political establishments by the Mon-speaking people that ruled large sections of present-day Burma (Myanmar) at various times in the last 1200 years. The kingdoms in chronological order are the Thaton Kingdom, the Hanthawaddy Kingdom (1287–1539), and the Restored Hanthawaddy Kingdom (1740–1757).

The Thaton Kingdom, Suwarnabhumi, or Thuwunnabumi was a Mon kingdom, believed to have existed in Lower Burma from at least the 4th century BC to the middle of the 11th century AD. One of many Mon kingdoms that existed in modern-day Lower Burma and Thailand, the kingdom was essentially a city-state centered on the city of Thaton. It traded directly with South India and Sri Lanka, and became a primary center of Theravada Buddhism in South-East Asia. Thaton, like other Mon kingdoms, faced the gradual encroachment of the Khmer Empire. But it was the Pagan Kingdom from the north that conquered the fabled kingdom in 1057.

Binnya U was king of Martaban–Hanthawaddy from 1348 to 1384. His reign was marked by several internal rebellions and external conflicts. He survived the initial rebellions and an invasion by Lan Na by 1353. But from 1364 onwards, his effective rule covered only the Pegu province, albeit the most strategic and powerful of the kingdom's three provinces. Constantly plagued by poor health, U increasingly relied on his sister Maha Dewi to govern. He formally handed her all his powers in 1383 while facing an open rebellion by his eldest son Binnya Nwe, who succeeded him as King Razadarit.

Binnya Ran II the 17th king of the Kingdom of Hanthawaddy in Burma from 1492 to 1526. He was revered for his gentleness although his first act as king was to enforce the massacre of the kinsmen, putting all the royal offspring to death.

Thushin Takayutpi was king of Hanthawaddy Pegu from 1526 to 1539. At his accession, the 15-year-old inherited the most prosperous and powerful kingdom of all post-Pagan kingdoms. But he never had control of his vassals who scarcely acknowledged him. A dozen years later, due to the young king's inexperience and mismanagement, the Mon-speaking kingdom founded in 1287 fell to a smaller Toungoo.

Nga Yamankan was Governor of Pegu (Bago) from 1077 to 1084, who raised an unsuccessful rebellion against Saw Lu of Pagan Dynasty. He nearly succeeded. He captured and killed Lu. But he was driven out of Upper Burma by Lu's half-brother, Kyansittha and was killed while in retreat. 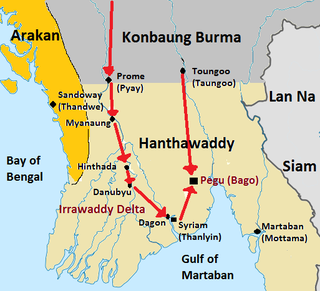 The Konbaung–Hanthawaddy War was the war fought between the Konbaung Dynasty and the Restored Hanthawaddy Kingdom of Burma (Myanmar) from 1752 to 1757. The war was the last of several wars between the Burmese-speaking north and the Mon-speaking south that ended the Mon people's centuries-long dominance of the south.

Slapat Rajawan Datow Smin Ron, more commonly known as Bago Yazawin, is a Mon language chronicle that covers 17 dynasties from the legendary times to the Hanthawaddy period. Written by an ethnic Mon monk, the chronicle was a religion/legend-centric chronicle although it does cover secular history from Sri Ksetra and Pagan to Hanthawaddy periods. Like the Hmannan Yazawin chronicle of the same period, Slatpat too linked its kings to the Buddha and Buddhist mythology. It was translated into German by P.W. Schmidt in 1906, and into English by R. Halliday in the Journal of the Burma Research Society in 1923. Schmidt's 1906 publication contains a reprint of a Mon language manuscript of the chronicle.

Tarabya of Pegu was the self-proclaimed king of Pegu from c. 1287 to c. 1296. He was one of several regional strongmen who emerged after the fall of the Pagan Empire in 1287.

Akhamaman was the self-proclaimed king of Pegu, in modern Myanmar, with the title of Thunekkhat Yaza from 1285 to c. 1287. He was one of several regional strongmen who emerged during the final years of the Pagan Empire in the 1280s. As the ruler of Pegu, he successfully fended off two attacks by King Narathihapate's forces. After the victory, however, he became deeply unpopular for his increasingly autocratic rule, and was assassinated.

Mon Yazawin, translated from Mon into Burmese by Shwe Naw, is a chronicle about the Hanthawaddy Kingdom as well as of earlier Mon polities. It is one of the two extant chronicles named "Mon Yazawin".