In military strategy, a choke point (or chokepoint) is a geographical feature on land such as a valley, defile or bridge, or maritime passage through a critical waterway such as a strait, which an armed force is forced to pass through in order to reach its objective, sometimes on a substantially narrowed front and therefore greatly decreasing its combat effectiveness by making it harder to bring superior numbers to bear. A choke point can allow a numerically inferior defending force to use the terrain as a force multiplier to thwart or ambush a much larger opponent, as the attacker cannot advance any further without first securing passage through the choke point.

Some historical examples of the tactical use of choke points are King Leonidas I's defense of the Pass of Thermopylae during an invasion led by Xerxes I of Persia; the Battle of Stamford Bridge in which Harold Godwinson defeated Harald Hardrada; William Wallace's victory over the English at the Battle of Stirling Bridge (Wallace had around 2,300 men against the English army of about 9,000 to 12,000 men and the bridge collapsed during the battle); and the Battle of Agincourt in which Henry V of England decisively defeated the French using a small army (consisting mainly of lightly equipped longbowmen) when the much larger force of French heavy cavalry were forced to charge at the Englishmen through a narrow muddy gap in the Azincourt Woods.

It was the suitability of the Caribbean as a maritime choke point that attracted pirates and buccaneers during the height of their activities the 17th and early 18th century. The Spanish treasure fleets leaving the Americas would have to pass through those waters to pick up the strong, prevailing westerly winds that would take them back to Spain across the North Atlantic.

Some choke points, with important locations in parentheses:

The Fulda Gap was seen as one of the potentially decisive bottleneck battlegrounds of the Cold War in Germany.

From the 18th to the early 20th centuries, the sheer size of the United Kingdom's Royal Navy meant it had control over much of the world's oceans and seas. Choke points were of huge importance to the British Empire, which often used them to control trade in British colonies and, to a lesser extent, for defense. Choke points have also been a source of tension, notably during the Suez Crisis. The Royal Navy still deems its choke points as strategically vital. Indeed, the importance of choke points was first recognised by British Admiral John Fisher. [1]

The choke points still have significant strategic importance for the Royal Navy. The GIUK gap is particularly important to the Royal Navy, as any attempt by northern European forces to break into the open Atlantic would have to do so through the heavily defended English Channel, which is also the world's busiest shipping lane, or through one of the exits on either side of Iceland. Considering British control over the strategic fortress of Gibraltar at the entrance to the Mediterranean, Spain (northern coast), France (Atlantic coast) and Portugal are the only mainland European nations that have direct access to the Atlantic Ocean in a way that cannot be easily blocked at a choke point by the Royal Navy. The GIUK gap was also a strategically important part of the Cold War, as the Royal Navy were given the responsibility of keeping an eye on Soviet submarines trying to break into the open Atlantic.

Choke points remain a prominent issue today in the global economy and shipments of goods, particularly oil: 20% of the world's oil is shipped through the Strait of Hormuz. In 2018, 20.7 million barrels were transported through the Strait of Hormuz. [2] The choke point has undergone continuous unrest since the 1980s. This includes, the downing of Iran Air Flight 655 by an American surface-to-air missile in 1988, the collision between nuclear submarine USS Newport News and crude tanker Mogamigawa in 2007, U.S.–Iranian naval dispute in 2008 and 2011-2012, seizure of MV Maersk Tigris in 2015 and threats of a strait closure in 2018 and 2019 made by the Islamic Republic of Iran. [3] Most recently, in April 2020, statements from Iran's military shows its readiness to defend its territorial integrity. [4] [5] [6]

The Suez Canal and the Sumed pipeline carry 4.5 million barrels (190,000,000 US gal; 720,000 m3) a day, and the canal carried a total of 7.5% of world trade in 2011. [7] The canal was closed for eight years after the Six-Day War in 1967. In many instances, alternate routes are nonexistent or impractical. For example, an alternate to the Suez/Sumed route required an additional 6,000 miles (9,700 km) around Cape of Good Hope. [8] The Royal Navy also still deems its choke points to the Atlantic as strategically important.

Threats to the Strait of Hormuz 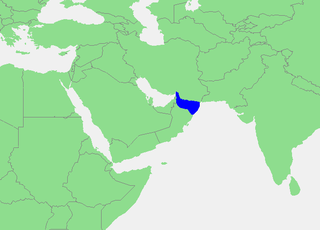 The Gulf of Oman or Sea of Oman is a gulf that connects the Arabian Sea with the Strait of Hormuz, which then runs to the Persian Gulf. It borders Iran and Pakistan on the north, Oman on the south, and the United Arab Emirates on the west And in some countries it is known as Makran Sea. 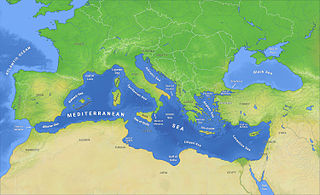 The Mediterranean Sea is a sea connected to the Atlantic Ocean, surrounded by the Mediterranean Basin and almost completely enclosed by land: on the north by Western and Southern Europe and Anatolia, on the south by North Africa, and on the east by the Levant. Although the sea is sometimes considered a part of the Atlantic Ocean, it is usually referred to as a separate body of water. Geological evidence indicates that around 5.9 million years ago, the Mediterranean was cut off from the Atlantic and was partly or completely desiccated over a period of some 600,000 years during the Messinian salinity crisis before being refilled by the Zanclean flood about 5.3 million years ago. 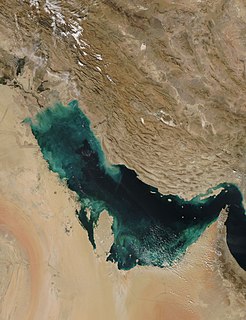 The Persian Gulf is a mediterranean sea in Western Asia. The body of water is an extension of the Indian Ocean through the Strait of Hormuz and lies between Iran to the northeast and the Arabian Peninsula to the southwest. The Shatt al-Arab river delta forms the northwest shoreline. 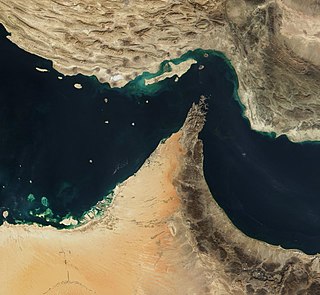 The Strait of Hormuz is a strait between the Persian Gulf and the Gulf of Oman. It provides the only sea passage from the Persian Gulf to the open ocean and is one of the world's most strategically important choke points. On the north coast lies Iran, and on the south coast the United Arab Emirates and Musandam, an exclave of Oman. The strait is about 90 nautical miles (167 km) long, with a width varying from about 52 nautical miles (96 km) to 21 nautical miles (39 km). 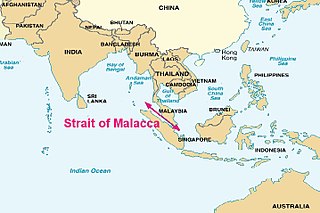 The Strait of Malacca or Straits of Malacca is a narrow stretch of water, 580 mi (930 km) in length, between the Malay Peninsula and the Indonesian island of Sumatra. As the main shipping channel between the Indian Ocean and the Pacific Ocean, it is one of the most important shipping lanes in the world. It is named after the Malacca Sultanate that ruled over the archipelago between 1400 and 1511, the center of administration of which was located in the modern-day state of Malacca, Malaysia. 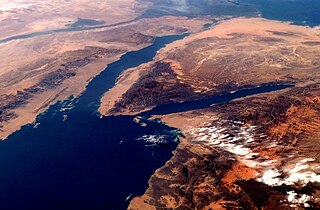 The Gulf of Suez is a gulf at the northern end of the Red Sea, to the west of the Sinai Peninsula. Situated to the east of the Sinai Peninsula is the smaller Gulf of Aqaba. The gulf was formed within a relatively young but now inactive Gulf of Suez Rift rift basin, dating back about 26 million years. It stretches some 300 kilometres (190 mi) north by northwest, terminating at the Egyptian city of Suez and the entrance to the Suez Canal. Along the mid-line of the gulf is the boundary between Africa and Asia. The entrance of the gulf lies atop the mature Gemsa oil and gas field. The gulf is considered one of the world's important maritime zones due to being an entrance to the Suez Canal.

The GIUK gap is an area in the northern Atlantic Ocean that forms a naval choke point. Its name is an acronym for Greenland, Iceland, and the United Kingdom, the gap being the open ocean between these three landmasses. The term is typically used in relation to military topics. The area has been considered strategically important since the beginning of the 20th century.

The Fifth Fleet is a numbered fleet of the United States Navy. It has been responsible for naval forces in the Persian Gulf, Red Sea, Arabian Sea, and parts of the Indian Ocean since 1995 after a 48-year hiatus. It shares a commander and headquarters with U.S. Naval Forces Central Command (NAVCENT) in Bahrain. As of 19 August 2020, the commander of the 5th Fleet is Vice Admiral Samuel J. Paparo Jr. Fifth Fleet/NAVCENT is a component command of, and reports to, U.S. Central Command (CENTCOM).

USS Aubrey Fitch (FFG-34), the twenty-sixth ship of the Oliver Hazard Perry-class of guided-missile frigates, was named for Vice-Admiral Aubrey Fitch (1883–1978), who was noted for his outstanding command work in the South Pacific during World War II. 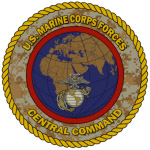 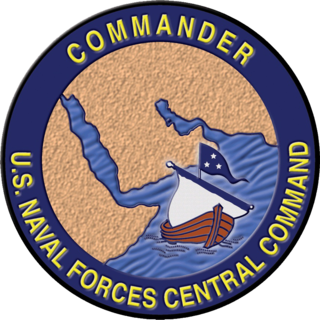 The String of Pearls is a geopolitical theory on potential Chinese government intentions in the Indian Ocean region (IOR). It refers to the network of Chinese military and commercial facilities and relationships along its sea lines of communication, which extend from the Chinese mainland to Port Sudan in the Horn of Africa. The sea lines run through several major maritime choke points such as the Strait of Mandeb, the Strait of Malacca, the Strait of Hormuz, and the Lombok Strait as well as other strategic maritime centres in Pakistan, Sri Lanka, Bangladesh, the Maldives, and Somalia. 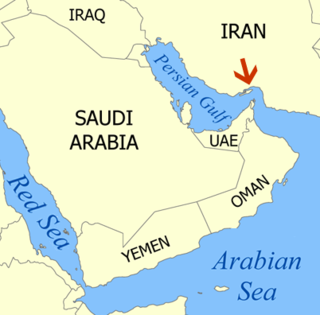 The Strait of Hormuz dispute is an ongoing dispute between a coalition of countries and Iran. The dispute arose on 27 December 2011, when Iranian Vice President Mohammad-Reza Rahimi threatened to close the Strait of Hormuz. In late April 2019 Iran said that it will block any shipping if it was barred from using the strategic waterway and in face of US sanctions 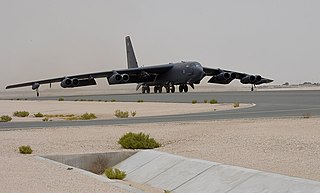 The 2019–2021 Persian Gulf crisis is an intensification of military tensions between the Islamic Republic of Iran and their allies and the United States of America and their allies in the Persian Gulf region. The U.S. began a buildup of its military presence in the region to deter an alleged planned campaign by Iran and its non-state allies to attack American forces and interests in the Persian Gulf and Iraq. This followed a rise in political tensions between the two countries during the Trump administration, which included the withdrawal of the U.S. from the Joint Comprehensive Plan of Action (JCPOA), the imposition of new sanctions against Iran, and the designation of the Islamic Revolutionary Guard Corps (IRGC) as a terrorist organization. In response, Iran designated the United States Central Command as a terrorist organization.

The International Maritime Security Construct (IMSC) is a consortium of countries officially tasked with maintaining order and security in the Persian Gulf, Gulf of Oman, Gulf of Aden and Southern Red Sea, particularly regarding maritime security of global oil supply routes. It was formed on 16 September 2019 in Bahrain, by the United Kingdom, Australia, Albania, Saudi Arabia, Bahrain, Lithuania, the United Arab Emirates, and the United States. The operational arm of the IMSC is Coalition Task Force SENTINEL.

Iran's anti-access/ area denial (A2/AD) strategy in the Strait of Hormuz mixes advanced technology with guerilla tactics to deny, deter or delay foreign forces access and maritime freedom of maneuver. The regular attempt by adversaries to deny one another freedom of movement on the battlefield can be observed throughout history. What makes anti-access/area-denial nowadays different from the past is the rapid improvement in military and communication technology in recent decades and new ways of implementing these strategies that such technology creates. Most scholarly attention seems to have gone to Chinese anti-access/area denial (A2/AD) capabilities, most likely because modern military technology is required to uphold A2/AD, it is almost always exclusively practiced by advanced regional powers like China. The A2/AD portfolio leverages diplomatic, information, military, and economic (DIME) activities. The focus of the Iranian A2/AD threat in the Strait of Hormuz is limited to the military dimension.