Cirsium is a genus of perennial and biennial flowering plants in the Asteraceae, one of several genera known commonly as thistles. They are more precisely known as plume thistles. These differ from other thistle genera ( Carduus , Silybum and Onopordum ) in having feathered hairs to their achenes. The other genera have a pappus of simple unbranched hairs. [2]

They are mostly native to Eurasia and northern Africa, with about 60 [3] species from North America (although several species have been introduced outside their native ranges).

Thistles are known for their effusive flower heads, usually purple, rose or pink, also yellow or white. The radially symmetrical disc flowers are at the end of the branches and are visited by many kinds of insects, featuring a generalised pollination syndrome. [4] They have erect stems and prickly leaves, with a characteristic enlarged base of the flower which is commonly spiny. The leaves are alternate, and some species can be slightly hairy. Extensions from the leaf base down the stem, called wings, can be lacking (Cirsium arvense), conspicuous (Cirsium vulgare), or inconspicuous. They can spread by seed, and also by rhizomes below the surface (Cirsium arvense). The seed has tufts of tiny hair, or pappus, which can carry them far by wind.

Cirsium thistles are used as food plants by the larvae of some Lepidoptera species - see list of Lepidoptera that feed on Cirsium. The seeds are attractive to small finches such as American goldfinch.

Most species are considered weeds, typically by agricultural interests. Cirsium vulgare (bull thistle, common thistle, or spear thistle) is listed as a noxious weed in nine US states. [5] Some species in particular are cultivated in gardens and wildflower plantings for their aesthetic value and/or to support pollinators such as butterflies. Some species dubbed weeds by various interest groups can also provide these benefits. Cirsium vulgare , for instance, ranked in the top 10 for nectar production in a UK plants survey conducted by the AgriLand project which is supported by the UK Insect Pollinators Initiative. Bull thistle was also a top producer of nectar sugar in another study in Britain, ranked third with a production per floral unit of (2323 ± 418μg). [6] Not only does it provide abundant nectar, it provides seeds and floss for birds, such as the American goldfinch, Spinus tristis , and supports the larvae of a Painted Lady butterfly, Vanessa cardui . [7] A great many native North American plants have weed in their common names, despite their beneficial qualities, such as Asclepias tuberosa , commonly known as butterflyweed. Some other common species are: Cirsium lanceolatum, Cirsium palustre, Cirsium oleraceum .

Some ecological organizations, such as the Xerces Society, have attempted to raise awareness of the benefits of thistles, to counteract the general agricultural and home garden labeling of thistles as unwanted weeds. The monarch butterfly, Danaus plexippus for instance, was highlighted as relying upon thistles such as Tall thistle, Cirsium altissimum , for its migration, as a very important nectar source. [8] Although such organizations focus on the benefits of native thistles, non-native thistles, such as Cirsium vulgare in North America, may provide similar benefits to wildlife. Some prairie and wildflower seed production companies supply bulk seed for native North American thistle species, for wildlife habitat restoration, although availability tends to be low. Thistles are particularly valued by bumblebees for their high nectar production.

Certain species of Cirsium, like Cirsium monspessulanum , Cirsium pyrenaicum and Cirsium vulgare , have been traditionally used as food in rural areas of southern Europe. Cirsium oleraceum is cultivated as a food source in Japan and India.

The word 'Cirsium' derives from the Greek word kirsos meaning 'swollen vein'. Thistles were used as a remedy against swollen veins. The flower blooms April to August. 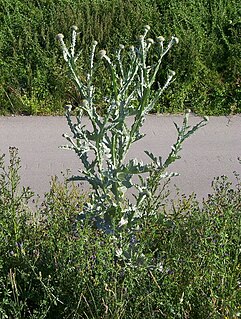 Onopordum acanthium is a flowering plant in the family Asteraceae. It is native to Europe and Western Asia from the Iberian Peninsula east to Kazakhstan, and north to central Scandinavia, and widely naturalised elsewhere. It is a vigorous biennial plant with coarse, spiny leaves and conspicuous spiny-winged stems. 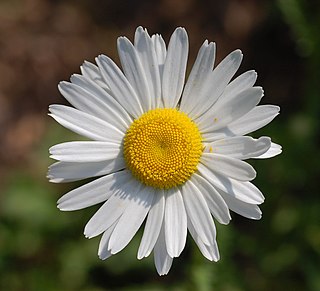 Leucanthemum vulgare, commonly known as the ox-eye daisy, oxeye daisy, dog daisy and other common names, is a widespread flowering plant native to Europe and the temperate regions of Asia, and an introduced plant to North America, Australia and New Zealand.

Cirsium vulgare, the spear thistle, bull thistle, or common thistle, is a species of the Asteraceae genus Cirsium, native throughout most of Europe, Western Asia, and northwestern Africa. It is also naturalised in North America, Africa, and Australia and is an invasive weed in some areas. It is the national flower of Scotland.

Cirsium palustre, the marsh thistle or European swamp thistle, is a herbaceous biennial flowering plant in the daisy family, Asteraceae.

Cirsium oleraceum, the cabbage thistle or Siberian thistle, is a species of thistle in the genus Cirsium within the sunflower family, native to central and eastern Europe and Asia, where it grows in wet lowland soils. 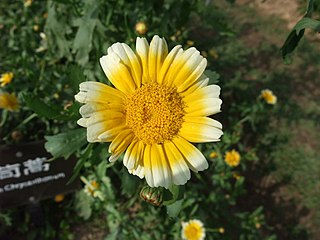 Glebionis segetum is a species of the genus Glebionis, probably native only to the eastern Mediterranean region but now naturalized in western and northern Europe as well as China and parts of North America. Common names include corn marigold and corn daisy. 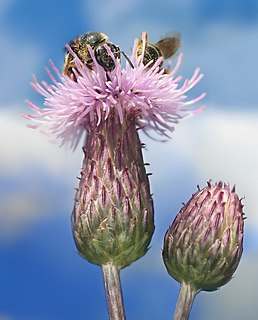 Cirsium arvense is a perennial species of flowering plant in the family Asteraceae, native throughout Europe and northern Asia, and widely introduced elsewhere. The standard English name in its native area is creeping thistle. It is also commonly known as Canada thistle and field thistle.

Thistle is the common name of a group of flowering plants characterised by leaves with sharp prickles on the margins, mostly in the family Asteraceae. Prickles can also occur all over the plant – on the stem and on the flat parts of the leaves. These prickles are an adaptation that protects the plant from being eaten by herbivores. Typically, an involucre with a clasping shape similar to a cup or urn subtends each of a thistle's flowerheads.

Cirsium edule, the edible thistle or Indian thistle, is a species of thistle in the genus Cirsium, native to western North America from southeastern Alaska south through British Columbia to Washington and Oregon, and locally inland to Idaho. It is a larval host to the mylitta crescent and the painted lady.

A noxious weed, harmful weed or injurious weed is a weed that has been designated by an agricultural or other governing authority as a plant that is injurious to agricultural or horticultural crops, natural habitats or ecosystems, or humans or livestock. Most noxious weeds have been introduced into an ecosystem by ignorance, mismanagement, or accident. Some noxious weeds are native. Typically they are plants that grow aggressively, multiply quickly without natural controls, and display adverse effects through contact or ingestion. Noxious weeds are a large problem in many parts of the world, greatly affecting areas of agriculture, forest management, nature reserves, parks and other open space. 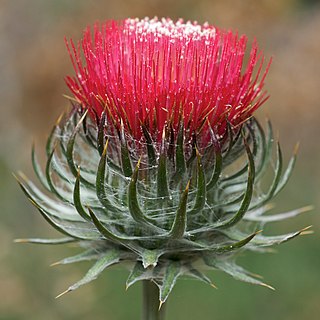 Cirsium occidentale, with the common name cobweb thistle or cobwebby thistle, is a North American species of thistle in the sunflower family. 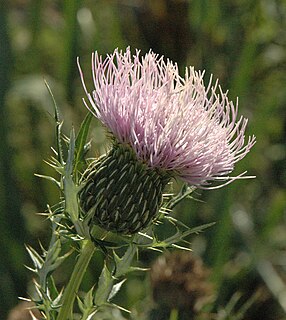 Cirsium discolor, the field thistle, is a North American species of plants in the thistle tribe, within the sunflower family. It is native to thirty-three states in the United States as well four Canadian provinces. It occurs across much of eastern and central Canada as well as eastern and central United States. It has been found from New Brunswick west to Saskatchewan and south as far as Texas and Georgia. 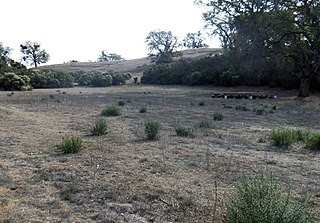 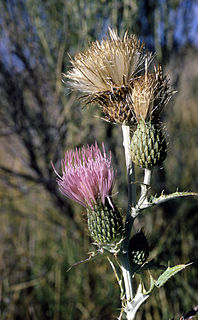 Cirsium undulatum is a species of thistle known by the common names wavyleaf thistle and gray thistle. It is native to much of central and western North America from British Columbia east to Manitoba and south as far as the State of Durango in Mexico. It has also been found outside of its native range as an introduced species.

Sisyrinchium sarmentosum is a species of flowering plant in the iris family known by the common names mountain blue-eyed grass and pale blue-eyed-grass. It is native to the Pacific Northwest of North America, where it is known from a part of the Cascade Mountains in Washington and Oregon.

Cirsium horridulum, called bristly thistle, horrid thistle, yellow thistle or bull thistle, is a North American species of plants in the thistle tribe within the sunflower family. It is an annual or biennial. The species is native to the eastern and southern United States from New England to Florida, Texas, and Oklahoma as well as to Mexico, Belize, Guatemala, Honduras, and the Bahamas.

Leontodon hispidus is a species of hawkbit known by the common names bristly hawkbit and rough hawkbit. It is native to Europe but it can be found throughout North America as an introduced species.