The collagen triple helix or type-2 helix is the primary secondary structure of various types of fibrous collagen, including type I collagen. It consists of a triple helix made of the repetitious amino acid sequence glycine-X-Y, where X and Y are frequently proline or hydroxyproline. [2] [3] Collagen folded into a triple helix is known as tropocollagen. Collagen triple helices are often bundled into fibrils which themselves form larger fibres, as in tendon.

Glycine, proline, and hydroxyproline must be in their designated positions with the correct configuration. For example, hydroxyproline in the Y position increases the thermal stability of the triple helix, but not when it is located in the X position. [4] The thermal stabilization is also hindered when the hydroxyl group has the wrong configuration. Due to the high abundance of glycine and proline contents, collagen fails to form a regular α-helix and β-sheet structure. Three left-handed helical strands twist to form a right-handed triple helix. [5] A collagen triple helix has 3.3 residues per turn. [6]

Each of the three chains is stabilized by the steric repulsion due to the pyrrolidine rings of proline and hydroxyproline residues. The pyrrolidine rings keep out of each other's way when the polypeptide chain assumes this extended helical form, which is much more open than the tightly coiled form of the alpha helix. The three chains are hydrogen bonded to each other. The hydrogen bond donors are the peptide NH groups of glycine residues. The hydrogen bond acceptors are the CO groups of residues on the other chains. The OH group of hydroxyproline does not participate in hydrogen bonding but stabilises the trans isomer of proline by stereoelectronic effects, therefore stabilizing the entire triple helix.

The rise of the collagen helix (superhelix) is 2.9 Å (0.29 nm) per residue. The center of the collagen triple helix is very small and hydrophobic, and every third residue of the helix must have contact with the center. [7] Due to the very tiny and tight space at the center, only the small hydrogen of the glycine side chain is capable of interacting with the center. [7] This contact is impossible even when a slightly bigger amino acid residue is present other than glycine. 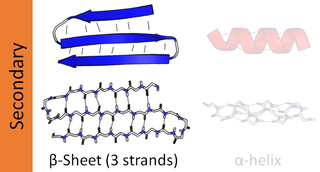 The beta sheet, (β-sheet) is a common motif of the regular protein secondary structure. Beta sheets consist of beta strands (β-strands) connected laterally by at least two or three backbone hydrogen bonds, forming a generally twisted, pleated sheet. A β-strand is a stretch of polypeptide chain typically 3 to 10 amino acids long with backbone in an extended conformation. The supramolecular association of β-sheets has been implicated in the formation of the fibrils and protein aggregates observed in amyloidosis, notably Alzheimer's disease.

Collagen is the main structural protein in the extracellular matrix found in the body's various connective tissues. As the main component of connective tissue, it is the most abundant protein in mammals, making up from 25% to 35% of the whole-body protein content. Collagen consists of amino acids bound together to form a triple helix of elongated fibril known as a collagen helix. It is mostly found in connective tissue such as cartilage, bones, tendons, ligaments, and skin. 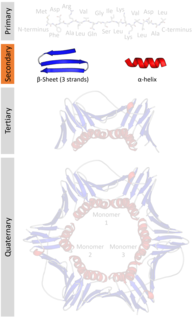 Proline (symbol Pro or P) is an organic acid classed as a proteinogenic amino acid (used in the biosynthesis of proteins), although it does not contain the amino group -NH
2 but is rather a secondary amine. The secondary amine nitrogen is in the protonated NH2+ form under biological conditions, while the carboxy group is in the deprotonated −COO− form. The "side chain" from the α carbon connects to the nitrogen forming a pyrrolidine loop, classifying it as a aliphatic amino acid. It is non-essential in humans, meaning the body can synthesize it from the non-essential amino acid L-glutamate. It is encoded by all the codons starting with CC (CCU, CCC, CCA, and CCG).

In chemistry, hydroxylation is can refer to: 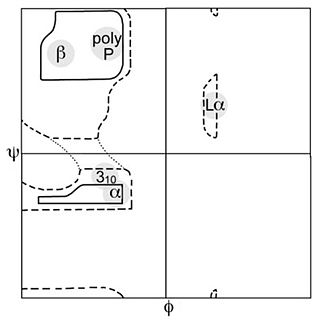 In biochemistry, a Ramachandran plot, originally developed in 1963 by G. N. Ramachandran, C. Ramakrishnan, and V. Sasisekharan, is a way to visualize energetically allowed regions for backbone dihedral angles ψ against φ of amino acid residues in protein structure. The figure on the left illustrates the definition of the φ and ψ backbone dihedral angles. The ω angle at the peptide bond is normally 180°, since the partial-double-bond character keeps the peptide planar. The figure in the top right shows the allowed φ,ψ backbone conformational regions from the Ramachandran et al. 1963 and 1968 hard-sphere calculations: full radius in solid outline, reduced radius in dashed, and relaxed tau (N-Cα-C) angle in dotted lines. Because dihedral angle values are circular and 0° is the same as 360°, the edges of the Ramachandran plot "wrap" right-to-left and bottom-to-top. For instance, the small strip of allowed values along the lower-left edge of the plot are a continuation of the large, extended-chain region at upper left.

Resilin is an elastomeric protein found in many insects and other arthropods. It provides soft rubber-elasticity to mechanically active organs and tissue; for example, it enables insects of many species to jump or pivot their wings efficiently. Resilin was first discovered by Torkel Weis-Fogh in locust wing-hinges. 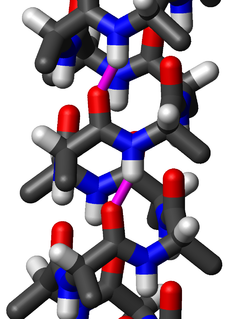 A pi helix is a type of secondary structure found in proteins. Discovered by crystallographer Barbara Low in 1952 and once thought to be rare, short π-helices are found in 15% of known protein structures and are believed to be an evolutionary adaptation derived by the insertion of a single amino acid into an α-helix. Because such insertions are highly destabilizing, the formation of π-helices would tend to be selected against unless it provided some functional advantage to the protein. π-helices therefore are typically found near functional sites of proteins. 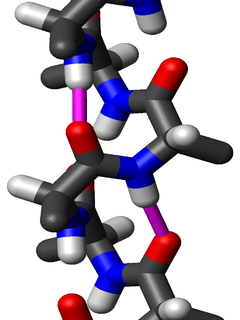 Type III Collagen is a homotrimer, or a protein composed of three identical peptide chains (monomers), each called an alpha 1 chain of type III collagen. Formally, the monomers are called collagen type III, alpha-1 chain and in humans are encoded by the COL3A1 gene. Type III collagen is one of the fibrillar collagens whose proteins have a long, inflexible, triple-helical domain.

In polymer science, the Lifson–Roig model is a helix-coil transition model applied to the alpha helix-random coil transition of polypeptides; it is a refinement of the Zimm–Bragg model that recognizes that a polypeptide alpha helix is only stabilized by a hydrogen bond only once three consecutive residues have adopted the helical conformation. To consider three consecutive residues each with two states, the Lifson–Roig model uses a 4x4 transfer matrix instead of the 2x2 transfer matrix of the Zimm–Bragg model, which considers only two consecutive residues. However, the simple nature of the coil state allows this to be reduced to a 3x3 matrix for most applications. 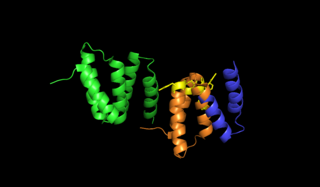 Procollagen-proline dioxygenase, commonly known as prolyl hydroxylase, is a member of the class of enzymes known as alpha-ketoglutarate-dependent hydroxylases. These enzymes catalyze the incorporation of oxygen into organic substrates through a mechanism that requires alpha-Ketoglutaric acid, Fe2+, and ascorbate. This particular enzyme catalyzes the formation of (2S, 4R)-4-hydroxyproline, a compound that represents the most prevalent post-translational modification in the human proteome.

In the fields of geometry and biochemistry, a triple helix is a set of three congruent geometrical helices with the same axis, differing by a translation along the axis. This means that each of the helices keeps the same distance from the central axis. As with a single helix, a triple helix may be characterized by its pitch, diameter, and handedness. Examples of triple helices include triplex DNA, triplex RNA, the collagen helix, and collagen-like proteins. 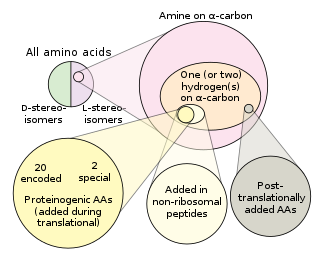 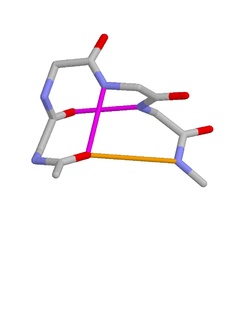 The Asx turn is a structural feature in proteins and polypeptides. It consists of three amino acid residues in which residue i is an aspartate (Asp) or asparagine (Asn) that forms a hydrogen bond from its sidechain CO group to the mainchain NH group of residue i+2. About 14% of Asx residues present in proteins belong to Asx turns.

A collagen hybridizing peptide (CHP) is a synthetic peptide sequence with typically 6 to 10 repeating units of the Gly-Xaa-Yaa amino acid triplet, which mimics the hallmark sequence of natural collagens. A CHP peptide usually possesses a high content of Proline and Hydroxyproline in the Xaa and Yaa positions, which confers it a strong propensity to form the collagen’s unique triple helix conformation. In the single-stranded (monomeric) status, the peptide can recognize denatured collagen strands in tissues by forming a hybridized triple helix with the collagen strands. This occurs via the triple helical chain assembly and inter-chain hydrogen bonding, in a manner similar to primers binding to melted DNA strands during PCR. The binding does not depend on a specific sequence or epitope on collagen, enabling CHPs to target denatured collagen chains of different types.