Last updated August 18, 2022
Geometric space with five dimensions
This article is about mathematical spaces having five dimensions. For the musical group, see The 5th Dimension. For alternate planes of existence in fiction, see fourth dimension in literature.

Much of the early work on five-dimensional space was in an attempt to develop a theory that unifies the four fundamental interactions in nature: strong and weak nuclear forces, gravity and electromagnetism. German mathematician Theodor Kaluza and Swedish physicist Oskar Klein independently developed the Kaluza–Klein theory in 1921, which used the fifth dimension to unify gravity with electromagnetic force. Although their approaches were later found to be at least partially inaccurate, the concept provided a basis for further research over the past century. [1]

To explain why this dimension would not be directly observable, Klein suggested that the fifth dimension would be rolled up into a tiny, compact loop on the order of 10-33 centimeters. [1] Under his reasoning, he envisioned light as a disturbance caused by rippling in the higher dimension just beyond human perception, similar to how fish in a pond can only see shadows of ripples across the surface of the water caused by raindrops. [2] While not detectable, it would indirectly imply a connection between seemingly unrelated forces. The Kaluza–Klein theory experienced a revival in the 1970s due to the emergence of superstring theory and supergravity: the concept that reality is composed of vibrating strands of energy, a postulate only mathematically viable in ten dimensions or more. Superstring theory then evolved into a more generalized approach known as M-theory. M-theory suggested a potentially observable extra dimension in addition to the ten essential dimensions which would allow for the existence of superstrings. The other 10 dimensions are compacted, or "rolled up", to a size below the subatomic level. [1] [2] The Kaluza–Klein theory today is seen as essentially a gauge theory, with the gauge being the circle group.[ citation needed ]

The fifth dimension is difficult to directly observe, though the Large Hadron Collider provides an opportunity to record indirect evidence of its existence. [1] Physicists theorize that collisions of subatomic particles in turn produce new particles as a result of the collision, including a graviton that escapes from the fourth dimension, or brane, leaking off into a five-dimensional bulk. [3] M-theory would explain the weakness of gravity relative to the other fundamental forces of nature, as can be seen, for example, when using a magnet to lift a pin off a table — the magnet is able to overcome the gravitational pull of the entire earth with ease. [1]

Mathematical approaches were developed in the early 20th century that viewed the fifth dimension as a theoretical construct. These theories make reference to Hilbert space, a concept that postulates an infinite number of mathematical dimensions to allow for a limitless number of quantum states. Einstein, Bergmann and Bargmann later tried to extend the four-dimensional spacetime of general relativity into an extra physical dimension to incorporate electromagnetism, though they were unsuccessful. [1] In their 1938 paper, Einstein and Bergmann were among the first to introduce the modern viewpoint that a four-dimensional theory, which coincides with Einstein-Maxwell theory at long distances, is derived from a five-dimensional theory with complete symmetry in all five dimensions. They suggested that electromagnetism resulted from a gravitational field that is “polarized” in the fifth dimension. [4]

The main novelty of Einstein and Bergmann was to seriously consider the fifth dimension as a physical entity, rather than an excuse to combine the metric tensor and electromagnetic potential. But they then reneged, modifying the theory to break its five-dimensional symmetry. Their reasoning, as suggested by Edward Witten, was that the more symmetric version of the theory predicted the existence of a new long range field, one that was both massless and scalar, which would have required a fundamental modification to Einstein's theory of general relativity. [5] Minkowski space and Maxwell's equations in vacuum can be embedded in a five-dimensional Riemann curvature tensor.[ citation needed ]

In 1993, the physicist Gerard 't Hooft put forward the holographic principle, which explains that the information about an extra dimension is visible as a curvature in a spacetime with one fewer dimension. For example, holograms are three-dimensional pictures placed on a two-dimensional surface, which gives the image a curvature when the observer moves. Similarly, in general relativity, the fourth dimension is manifested in observable three dimensions as the curvature path of a moving infinitesimal (test) particle. 'T Hooft has speculated that the fifth dimension is really the spacetime fabric.[ citation needed ]

An important uniform 5-polytope is the 5-demicube, h{4,3,3,3} has half the vertices of the 5-cube (16), bounded by alternating 5-cell and 16-cell hypercells. The expanded or stericated 5-simplex is the vertex figure of the A5 lattice,

. It and has a doubled symmetry from its symmetric Coxeter diagram. The kissing number of the lattice, 30, is represented in its vertices. [7] The rectified 5-orthoplex is the vertex figure of the D5 lattice,

. Its 40 vertices represent the kissing number of the lattice and the highest for dimension 5. [8]

A hypersphere in 5-space (also called a 4-sphere due to its surface being 4-dimensional) consists of the set of all points in 5-space at a fixed distance r from a central point P. The hypervolume enclosed by this hypersurface is:

In physics, Kaluza–Klein theory is a classical unified field theory of gravitation and electromagnetism built around the idea of a fifth dimension beyond the common 4D of space and time and considered an important precursor to string theory. Gunnar Nordström had an earlier, similar idea. But in that case, a fifth component was added to the electromagnetic vector potential, representing the Newtonian gravitational potential, and writing the Maxwell equations in five dimensions.

M-theory is a theory in physics that unifies all consistent versions of superstring theory. Edward Witten first conjectured the existence of such a theory at a string theory conference at the University of Southern California in 1995. Witten's announcement initiated a flurry of research activity known as the second superstring revolution. Prior to Witten's announcement, string theorists had identified five versions of superstring theory. Although these theories initially appeared to be very different, work by many physicists showed that the theories were related in intricate and nontrivial ways. Physicists found that apparently distinct theories could be unified by mathematical transformations called S-duality and T-duality. Witten's conjecture was based in part on the existence of these dualities and in part on the relationship of the string theories to a field theory called eleven-dimensional supergravity.

In physics, string theory is a theoretical framework in which the point-like particles of particle physics are replaced by one-dimensional objects called strings. String theory describes how these strings propagate through space and interact with each other. On distance scales larger than the string scale, a string looks just like an ordinary particle, with its mass, charge, and other properties determined by the vibrational state of the string. In string theory, one of the many vibrational states of the string corresponds to the graviton, a quantum mechanical particle that carries the gravitational force. Thus, string theory is a theory of quantum gravity.

A theory of everything, final theory, ultimate theory, unified field theory or master theory is a hypothetical, singular, all-encompassing, coherent theoretical framework of physics that fully explains and links together all aspects of the universe. Finding a theory of everything is one of the major unsolved problems in physics. String theory and M-theory have been proposed as theories of everything. 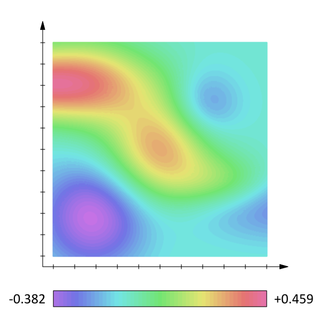 In mathematics and physics, a scalar field or scalar-valued function associates a scalar value to every point in a space – possibly physical space. The scalar may either be a (dimensionless) mathematical number or a physical quantity. In a physical context, scalar fields are required to be independent of the choice of reference frame, meaning that any two observers using the same units will agree on the value of the scalar field at the same absolute point in space regardless of their respective points of origin. Examples used in physics include the temperature distribution throughout space, the pressure distribution in a fluid, and spin-zero quantum fields, such as the Higgs field. These fields are the subject of scalar field theory.

Theodor Franz Eduard Kaluza was a German mathematician and physicist known for the Kaluza–Klein theory, involving field equations in five-dimensional space-time. His idea that fundamental forces can be unified by introducing additional dimensions re-emerged much later in string theory.

In theoretical physics, geometrodynamics is an attempt to describe spacetime and associated phenomena completely in terms of geometry. Technically, its goal is to unify the fundamental forces and reformulate general relativity as a configuration space of three-metrics, modulo three-dimensional diffeomorphisms. It was enthusiastically promoted by John Wheeler in the 1960s, and work on it continues in the 21st century.

In physics, a unified field theory (UFT) is a type of field theory that allows all that is usually thought of as fundamental forces and elementary particles to be written in terms of a pair of physical and virtual fields. According to the modern discoveries in physics, forces are not transmitted directly between interacting objects but instead are described and interrupted by intermediary entities called fields.

Since the 19th century, some physicists, notably Albert Einstein, have attempted to develop a single theoretical framework that can account for all the fundamental forces of nature – a unified field theory. Classical unified field theories are attempts to create a unified field theory based on classical physics. In particular, unification of gravitation and electromagnetism was actively pursued by several physicists and mathematicians in the years between the two World Wars. This work spurred the purely mathematical development of differential geometry.

In theoretical physics and quantum physics, a graviphoton or gravivector is a hypothetical particle which emerges as an excitation of the metric tensor in spacetime dimensions higher than four, as described in Kaluza–Klein theory. However, its crucial physical properties are analogous to a (massive) photon: it induces a "vector force", sometimes dubbed a "fifth force". The electromagnetic potential emerges from an extra component of the metric tensor , where the figure 5 labels an additional, fifth dimension.

In general relativity, the pp-wave spacetimes, or pp-waves for short, are an important family of exact solutions of Einstein's field equation. The term pp stands for plane-fronted waves with parallel propagation, and was introduced in 1962 by Jürgen Ehlers and Wolfgang Kundt.

Superstring theory is an attempt to explain all of the particles and fundamental forces of nature in one theory by modeling them as vibrations of tiny supersymmetric strings.

Øyvind Grøn is a Norwegian physicist.

Claud Lovelace was a theoretical physicist noted for his contributions to string theory, specifically, the idea that strings did not have to be restricted to the four dimensions of spacetime.

In physics, a non-relativistic spacetime is any mathematical model that fuses n–dimensional space and m–dimensional time into a single continuum other than the (3+1) model used in relativity theory.