He was nominated for Academy Awards (in the category Best Short Subjects, Cartoon) for seven consecutive years (1942–1948) and received an honorary award in 1944. This makes him the second-most nominated Hungarian exile (together with William S. Darling and Ernest Laszlo) after Miklós Rózsa.

Pal was born in Cegléd, Hungary, the son of György Pál Marczincsak, Sr. [2] and his wife Mária. He graduated from the Hungarian University of Fine Arts in 1928 (aged 20). From 1928 to 1931, he made films for Hunnia Film Studio of Budapest, Hungary.

At the age of 23 in 1931, he married Elisabeth "Zsóka" Grandjean, and after moving to Berlin, founded Trickfilm-Studio GmbH Pal und Wittke, with UFA Studios as its main customer from 1931 to 1933. During this time, he patented the Pal-Doll technique (known as Puppetoons in the US).

In 1933, he worked in Prague; in 1934, he made a film advertisement in his hotel room in Paris, and was invited by Philips to make two more ad shorts. He started to use Pal-Doll techniques in Eindhoven, in a former butchery, then at villa-studio Suny Home. He left Germany as the Nazis came to power.

He made five films before 1939 for the British company Horlicks Malted Milk. In December of that year, aged 32, he emigrated from Europe to the United States, [3] and began work for Paramount Pictures. At this time, his friend Walter Lantz helped him obtain American citizenship.

As an animator, he made the Puppetoons series in the 1940s, which led to him being awarded an honorary Oscar in 1943 for "the development of novel methods and techniques in the production of short subjects known as Puppetoons". Pal then switched to live-action film-making with The Great Rupert (1950).

He is best remembered as the producer of several science-fiction and fantasy films in the 1950s and 1960s, such as When Worlds Collide , [4] four of which were collaborations with director Byron Haskin, including The War of the Worlds (1953). He himself directed Tom Thumb (1958), The Time Machine (1960), and The Wonderful World of the Brothers Grimm (1962).

In May 1980, he died in Beverly Hills, California, of a heart attack at the age of 72, and is buried in Holy Cross Cemetery, Culver City, California. The Voyage of the Berg, on which he was working at the time, was never completed.

Pal has a star on the Hollywood Walk of Fame at 1722 Vine St. In 1980, the Academy of Motion Picture Arts and Sciences founded the "George Pal Lecture on Fantasy in Film" series in his memory.

George Pal (along with the film When Worlds Collide) is among the many references to classic science fiction and horror films in the opening theme ("Science Fiction/Double Feature") of both the stage musical The Rocky Horror Show and its cinematic counterpart, The Rocky Horror Picture Show (1975). [5]

In 1975, Pal received the Golden Plate Award of the American Academy of Achievement, [6] as well as the San Diego Comic Con Inkpot Award. [7]

Pal's Puppetoons Tulips Shall Grow and John Henry and the Inky-Poo (1946) were added to the Library of Congress 1997 and 2015 National Film Registry. [8] One of the Tubby the Tuba models along with a frog and three string instruments were donated to the Smithsonian Institution for the National Museum of American History. [9]

The Academy Film Archive has preserved several of George Pal's films, including Jasper and the Beanstalk, John Henry and the Inky Poo, and Radio Röhren Revolution. [10] 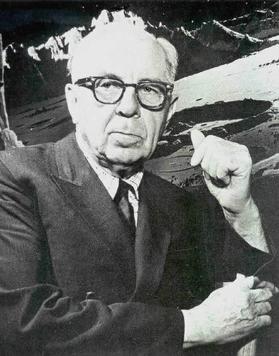 Chesley Knight Bonestell Jr. was an American painter, designer and illustrator. His paintings inspired the American space program, and they have been influential in science fiction art and illustration. A pioneering creator of astronomical art, along with the French astronomer-artist Lucien Rudaux, Bonestell has been dubbed the "Father of Modern Space art".

The Saturn Award for Best Director is one of the annual awards given by the American Academy of Science Fiction, Fantasy & Horror Films. The Saturn Awards, which are the oldest film-specialized awards to reward genre fiction achievements, in particular for science fiction, fantasy, and horror, included the Best Director category for the first time at the 3rd Saturn Awards, for the 1974/1975 film years. 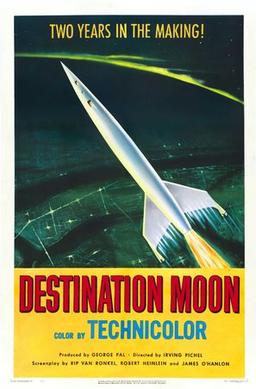 Destination Moon is a 1950 American Technicolor science fiction film, independently produced by George Pal and directed by Irving Pichel, that stars John Archer, Warner Anderson, Tom Powers, and Dick Wesson. The film was distributed in the United States and the United Kingdom by Eagle-Lion Classics.

The Saturn Award for Best Animated Film is one of the annual awards given by the American professionnel organization, the Academy of Science Fiction, Fantasy & Horror Films. The Saturn Awards, which are the oldest film-specialized awards to reward science fiction, fantasy, and horror achievements, included the Best Animated Film category for the first time only in 1978, was revived in 1982, and still currently reactivated since 2002. 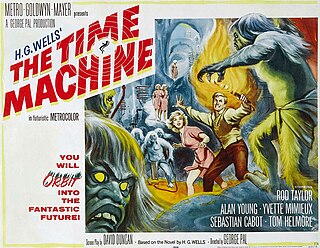 The Time Machine is a 1960 American period science fiction film based on the 1895 novella of the same name by H. G. Wells. It was produced and directed by George Pal, and stars Rod Taylor, Yvette Mimieux, and Alan Young. The story is set in Victorian England and follows an inventor who constructs a machine that enables him to travel into the distant future. Once there, he discovers that mankind's descendants have divided into two species, the passive, childlike, and vegetarian Eloi and the underground-dwelling Morlocks, who feed on the Eloi.

Puppetoons is a series of animated puppet films made in Europe (1930s) and in the United States (1940s) by George Pal. They were made using replacement animation: using a series of different hand-carved wooden puppets for each frame in which the puppet moves or changes expression, rather than moving a single puppet, as is the case with most stop motion puppet animation. They were particuarly made from 1932-1948, in both Europe and the US.

Albert Nozaki was a Japanese American art director who worked on various films for Paramount Pictures. He is perhaps best known for his memorable design of the Martian war machines from the 1953 film The War of the Worlds and for his Academy Award-nominated art direction on the 1956 Cecil B. DeMille epic, The Ten Commandments. He retired in 1969 due to retinitis pigmentosa, which ultimately cost him his sight. Starting out at Paramount as a draftsman in the Paramount set-design department in 1934, he retired in 1969 as the studio's supervising art director for feature films. 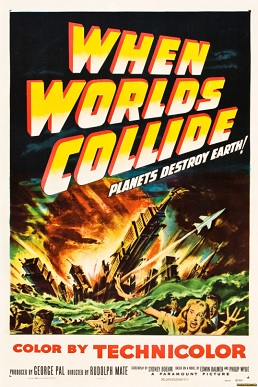 When Worlds Collide is a 1951 American science fiction disaster film released by Paramount Pictures. It was produced by George Pal, directed by Rudolph Maté, and stars Richard Derr, Barbara Rush, Peter Hansen, and John Hoyt. The film is based on the 1933 science fiction novel of the same name, co-written by Edwin Balmer and Philip Wylie. 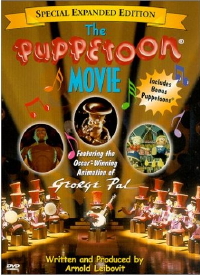 The Puppetoon Movie is a 1987 animated film written, produced, and directed by Arnold Leibovit. It is based on the Puppetoons characters created by George Pal in the 1930s and 1940s which feature the eponymous Puppetoon animation, and features Gumby, Pokey and Arnie the Dinosaur, who host the framing story. Its framing story stars the voices of Dick Beals, Art Clokey, Paul Frees and Dallas McKennon as the main characters.

Gene Warren Sr. was born in Denver, Colorado, and won an Academy Award for the special effects on George Pal's The Time Machine in 1960. He also contributed to such projects as The Way of Peace (1947), Land of the Lost (1974), Man from Atlantis, and The Crow: City of Angels.

The 30th Saturn Awards, presented by the Academy of Science Fiction, Fantasy and Horror Films and honoring the best in science fiction, fantasy, horror, and other genres belonging to genre fiction in film, television and home entertainment in 2003, were held on May 5, 2004 at the Sheraton Universal Hotel in Los Angeles, California. The nominations were announced on February 17, 2004.

Arnold Leibovit is an American director, producer, and screenwriter of feature films and musical productions. An acting member of the Producers Guild of America, he has produced, directed, and written several feature films. As part of his career, he has devoted over 40 years to the work of George Pal. Included is the production of the George Pal biopic The Fantasy Film Worlds of George Pal, for which he received a CINE Golden Eagle Award in the Arts category in 1986 and The George Pal Memorial Award from The Academy of Science Fiction Fantasy and Horror Films in 1987. In addition, he produced other works focusing on Pal including The Puppetoon Movie. 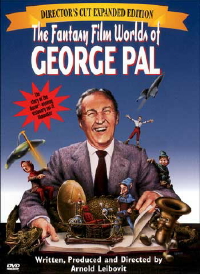 The Fantasy Film Worlds of George Pal is a 1985 American documentary film about Academy Award-winning producer/director George Pal. It was written, directed, and produced by Arnold Leibovit.

The George Pal Memorial Award is presented each year, by the Academy of Science Fiction, Fantasy and Horror Films, in conjunction with their annual Saturn Award ceremony. The award is given to those who have shown exemplary work in the respective film genres. It is named in honor of George Pal, a Hungarian-born American animator and film producer, principally associated with the science fiction genre.

The Saturn Awards are American awards presented annually by the Academy of Science Fiction, Fantasy and Horror Films. The awards were created to honor science fiction, fantasy, and horror in film, but have since grown to reward other films belonging to genre fiction, as well as television and home media releases. The Saturn Awards were created in 1973 and were originally referred to as Golden Scrolls.

John Henry and the Inky-Poo is a 1946 stop-motion animation film written and directed by George Pal using Pal's Puppetoons stop-motion style. The film is based on African American folk hero John Henry.

The Saturn Award for Best Streaming Superhero Series is one of the annual awards given by the American Academy of Science Fiction, Fantasy & Horror Films. The Saturn Awards, which are the oldest film and series-specialized awards to reward science fiction, fantasy, and horror achievements, included the category for the first time at the 44th Saturn Awards. It specifically rewards superhero fiction streaming television series created for non-traditional platforms such as Netflix, Amazon, and Hulu.

The Saturn Award for Best Actress in a Streaming Television Series is one of the annual awards given by the American professional organization, the Academy of Science Fiction, Fantasy & Horror Films. The Saturn Awards are the oldest film-specialized awards to reward science fiction, fantasy, and horror achievements.