Goodwill in accounting is an intangible asset that arises when a buyer acquires an existing business. Goodwill represents assets that are not separately identifiable. Goodwill does not include identifiable assets that are capable of being separated or divided from the entity and sold, transferred, licensed, rented, or exchanged, either individually or together with a related contract, identifiable asset, or liability regardless of whether the entity intends to do so. Goodwill also does not include contractual or other legal rights regardless of whether those are transferable or separable from the entity or other rights and obligations. Goodwill is also only acquired through an acquisition; it cannot be self-created. Examples of identifiable assets that are goodwill include a company’s brand name, customer relationships, artistic intangible assets, and any patents or proprietary technology. The goodwill amounts to the excess of the "purchase consideration" (the money paid to purchase the asset or business) over the net value of the assets minus liabilities. It is classified as an intangible asset on the balance sheet, since it can neither be seen nor touched. Under US GAAP and IFRS, goodwill is never amortized, because it is considered to have an indefinite useful life. Instead, management is responsible for valuing goodwill every year and to determine if an impairment is required. If the fair market value goes below historical cost (what goodwill was purchased for), an impairment must be recorded to bring it down to its fair market value. However, an increase in the fair market value would not be accounted for in the financial statements. Private companies in the United States, however, may elect to amortize goodwill over a period of ten years or less under an accounting alternative from the Private Company Council of the FASB.

In order to acquire company B, company A paid $20. Hence, goodwill would be $11 ($20 − $9). The journal entry in the books of company A to record the acquisition of company B would be:

Goodwill is a special type of intangible asset that represents that portion of the entire business value that cannot be attributed to other income producing business assets, tangible or intangible. [1]

For example, a privately held software company may have net assets (consisting primarily of miscellaneous equipment and/or property, and assuming no debt) valued at $1 million, but the company's overall value (including customers and intellectual capital) is valued at $10 million. Anybody buying that company would book $10 million in total assets acquired, comprising $1 million physical assets and $9 million in other intangible assets. And any consideration paid in excess of $10 million shall be considered as goodwill. In a private company, goodwill has no predetermined value prior to the acquisition; its magnitude depends on the two other variables by definition. A publicly traded company, by contrast, is subject to a constant process of market valuation, so goodwill will always be apparent.

While a business can invest to increase its reputation, by advertising or assuring that its products are of high quality, such expenses cannot be capitalized and added to goodwill, which is technically an intangible asset. Goodwill and intangible assets are usually listed as separate items on a company's balance sheet. [2] [3]

History and purchase vs. pooling-of-interests

Amortization and adjustments to carrying value

Goodwill is no longer amortized under U.S. GAAP (FAS 142). [5] FAS 142 was issued in June 2001. Companies objected to the removal of the option to use pooling-of-interests, so amortization was removed by Financial Accounting Standards Board as a concession. As of 2005-01-01, it is also forbidden under International Financial Reporting Standards. Goodwill can now only be impaired under these GAAP standards. [6]

When the business is threatened with insolvency, investors will deduct the goodwill from any calculation of residual equity because it has no resale value.

The accounting treatment for goodwill remains controversial, within both the accounting and financial industries, because it is, fundamentally, a workaround employed by accountants to compensate for the fact that businesses, when purchased, are valued based on estimates of future cash flows and prices negotiated by the buyer and seller, and not on the fair value of assets and liabilities to be transferred by the seller. This creates a mismatch between the reported assets and net incomes of companies that have grown without purchasing other companies, and those that have.

While companies will follow the rules prescribed by the Accounting Standards Boards, there is not a fundamentally correct way to deal with this mismatch under the current financial reporting framework. Therefore, the accounting for goodwill will be rules based, and those rules have changed, and can be expected to continue to change, periodically along with the changes in the members of the Accounting Standards Boards. The current rules governing the accounting treatment of goodwill are highly subjective and can result in very high costs, but have limited value to investors.

In financial accounting, a balance sheet is a summary of the financial balances of an individual or organization, whether it be a sole proprietorship, a business partnership, a corporation, private limited company or other organization such as government or not-for-profit entity. Assets, liabilities and ownership equity are listed as of a specific date, such as the end of its financial year. A balance sheet is often described as a "snapshot of a company's financial condition". Of the four basic financial statements, the balance sheet is the only statement which applies to a single point in time of a business' calendar year.

In accounting, book value is the value of an asset according to its balance sheet account balance. For assets, the value is based on the original cost of the asset less any depreciation, amortization or impairment costs made against the asset. Traditionally, a company's book value is its total assets minus intangible assets and liabilities. However, in practice, depending on the source of the calculation, book value may variably include goodwill, intangible assets, or both. The value inherent in its workforce, part of the intellectual capital of a company, is always ignored. When intangible assets and goodwill are explicitly excluded, the metric is often specified to be "tangible book value".

An intangible asset is an asset that lacks physical substance. Examples are patents, copyright, franchises, goodwill, trademarks, and trade names, as well as software. This is in contrast to physical assets and financial assets. An intangible asset is usually very difficult to evaluate. They suffer from typical market failures of non-rivalry and non-excludability.

In accounting and in most schools of economic thought, fair value is a rational and unbiased estimate of the potential market price of a good, service, or asset. The derivation takes into account such objective factors as the costs associated with production or replacement, market conditions and matters of supply and demand. Subjective factors may also be considered such as the risk characteristics, the cost of and return on capital, and individually perceived utility.

In business, amortization refers to spreading payments over multiple periods. The term is used for two separate processes: amortization of loans and amortization of assets. In the latter case it refers to allocating the cost of an intangible asset over a period of time.

Valuation is considered as one of the most critical areas in finance; it plays a key role in many areas of finance such as buy/sell, solvency, merger and acquisition.

In insurance, Deferred Acquisition Costs (DAC) is an asset on the balance sheet representing the deferral of the cost of acquiring new insurance contracts, thereby amortising the costs over their duration. Insurance companies face large upfront costs incurred in issuing new business, such as commissions to sales agents, underwriting, bonus interest and other acquisition expenses.

In financial accounting, an asset is any resource owned or controlled by a business or an economic entity. It is anything that can be utilized to produce value and that is held by an economic entity and that could produce positive economic value. Simply stated, assets represent value of ownership that can be converted into cash . The balance sheet of a firm records the monetary value of the assets owned by that firm. It covers money and other valuables belonging to an individual or to a business. 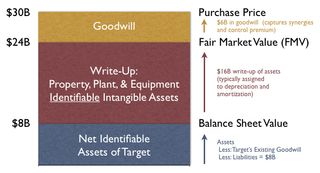 Purchase price allocation (PPA) is an application of goodwill accounting whereby one company, when purchasing a second company, allocates the purchase price into various assets and liabilities acquired from the transaction. 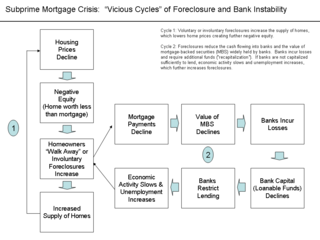 The role of fair value accounting in the subprime mortgage crisis of 2008 is controversial. Fair value accounting was issued as US accounting standard SFAS 157 in 2006 by the privately run Financial Accounting Standards Board (FASB)—delegated by the SEC with the task of establishing financial reporting standards. This required that tradable assets such as mortgage securities be valued according to their current market value rather than their historic cost or some future expected value. When the market for such securities became volatile and collapsed, the resulting loss of value had a major financial effect upon the institutions holding them even if they had no immediate plans to sell them.

In accounting, tax amortization benefit refers to the present value of income tax savings resulting from the tax deduction generated by the amortization of an intangible asset.