The line-cheeked spinetail (Cranioleuca antisiensis) is an arboreal species of bird in the ovenbird family Furnariidae. It is a common species in the Andes in Ecuador and Peru. Its natural habitat is subtropical or tropical moist montane forests, woodland and scrub. It is distinguished from other species by its distribution, behaviour and white supercilium. There are two recognized subspecies, which are in reality a gradient in morphology and plumage from one extreme to the other.

The line-cheeked spinetail was formally described in 1859 by the English zoologist Philip Sclater from a specimen collected near the town of Cuenca in Ecuador. Sclater coined the binomial name Synallaxis antisiensis. The species is now placed in the genus Cranioleuca was introduced in 1853 by the German naturalist Ludwig Reichenbach. [3] [4]

The majority of species within the genus Cranioleuca diverged relatively recently in a rapid speciation event beginning approximately 3.5 Ma. [6] It is unclear what drove the divergence, as there is little difference in morphology or behaviour between species. One hypothesis is that a rapid change in plumage, in conjunction with some other traits, may have caused reproductive isolation and speciation. [6] There is evidence that climatic niches have been a driver of speciation within the genus, particularly within the line-cheeked spinetail species complex. Its distribution spans an elevation gradient, as well as different climates, which is reflected in gradual phenotypic differences. Body mass increases from north to south, in accordance with Bergmann's rule. This in turn has an effect on the vocalizations along the range. [5]

The line-cheeked spinetail is a mid-sized spinetail, weighing 15–18 g and reaching 14.5 cm long. [7] Like other spinetails in the genus Cranioleuca , it has a long graduated tail and a relatively long bill that curves downward slightly. [2] It has a rufous crown; with a well-defined white supercilium; a pale throat; and some streaking on its ear coverts. It is brown to olive-grey above; with a greyish brown breast and belly; and rufous tail and wings. [7]

The line-cheeked spinetail is a diurnal species and vocalizes most actively at dawn and dusk to maintain their breeding territory boundaries. [2] It is often seen singing alone in branches near the top of trees. [8] Its calls are a variation of chippering and scolding, including a "tsi-chik". The song is a series of loud shrills, usually ending in a trill before fading. [7] Both adults and juveniles respond strongly to playback of songs, suggesting aggression between individuals within the species. [2]

The line-cheeked spinetail occupies a clinal distribution along the western slope of the Andes in south-west Ecuador and western Peru. A published observation of a breeding pair in Mashpi Protected Forest suggests that their distribution may extend further north in Ecuador than previously thought. [9] However, more observations would be needed to confirm this. The tree-line along the western slope of the Andes occurs around 3000m, which is also the highest elevation that line-cheeked spinetails occur. In Ecuador, line-cheeked spinetails can occupy elevations as low as 800m, whereas it is limited to 2000m is the more arid regions of its Peru range. [2]

Its habitat ranges from semi-humid to humid montane scrub forest and forest edges. However, it prefers habitat less humid than "cloud forests". Line-cheeked spinetails occur primarily where there is dense evergreen vegetation, and are not found in deciduous and arid habitats. [2]

Line-cheeked spinetails defend relatively small territories as a family group. These groups often consist of 2–4 adults and 1–2 juveniles. [2] They are also sometimes seen in mixed flocks. [8]

Little is known about the courtship of line-cheeked spinetails; however, they are assumed to be socially monogamous. [2] Nests are formed around February and March, and two eggs are laid. Nests are usually large and oval shaped, built at the ends of branches. [2] A nest in north-west Ecuador was described as a domed structure built on the underside of a palm leaf. The exterior was constructed out of moss, cucurbitaceous vine and covered in the hairy seeds of a Bombacaceae, while the interior was built with palm fibres, Lauraceae leaves and lines with epiphyte rootlets. [9] Incubation and parental care have not been described, although fledglings are observed by August. [2]

As with other species within the family Furnariidae, line-cheeked spinetails are insectivores, although their exact diet has not yet been studied. [2] They glean primarily near the ground and within shrubs. [7] However, their status as an understory bird is questioned, as they will often move up in the canopy to forage. [8]

Ovenbirds or furnariids are a large family of small suboscine passerine birds found from Mexico and Central to southern South America. They form the family Furnariidae. This is a large family containing around 315 species and 70 genera. The ovenbird, which breeds in North America, is not a furnariid – rather it is a distantly related bird of the wood warbler family, Parulidae. 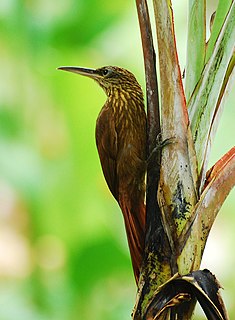 The woodcreepers (Dendrocolaptinae) comprise a subfamily of suboscine passerine birds endemic to the Neotropics. They have traditionally been considered a distinct family Dendrocolaptidae, but most authorities now place them as a subfamily of the ovenbirds (Furnariidae). They superficially resemble the Old World treecreepers, but they are unrelated and the similarities are due to convergent evolution. The subfamily contains around 57 species in 15 to 20 genera. 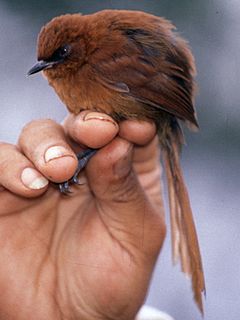 Synallaxis is a genus of birds in the ovenbird family, Furnariidae. It is one of the most diverse genera in the family and is composed of small birds that inhabit dense undergrowth across tropical and subtropical habitats in the Neotropical region. Some species show contrasting plumage patterns involving rufous crown and wing patches and black throat patches but they are difficult to see as they keep ensconced in vegetation most of the time. Most species show the long graduated tail with pointy feathers that is typical of spinetails. They are also characterized by constructing large domed nests with stick, including a long entrance tube. Some species can be difficult to distinguish from one another on the basis of their plumage, but can be tell apart by their vocalizations, which can be quite distinctive.

The plain-mantled tit-spinetail is a small passerine bird of South America belonging to the ovenbird family, Furnariidae. It is a common bird across much of Chile, southern and eastern Argentina, southern Peru and western Bolivia. It occurs from 0 to 4,300 metres above sea level in a variety of habitats including arid country, open woodland, forest edge, scrub, grassland, parks and gardens. It forages among leaves and branches, searching for insects.

The tepui foliage-gleaner, also known as the white-throated foliage-gleaner, is a species of bird in the family Furnariidae. It is found in forest and woodland in the tepuis of Brazil, Guyana and Venezuela. 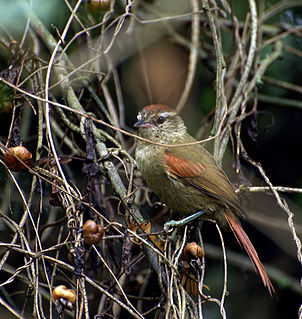 The typical spinetails, Cranioleuca, are a genus of Neotropical birds in the ovenbird family Furnariidae.

The ash-browed spinetail is a species of bird in the family Furnariidae. It is found in Bolivia, Colombia, Ecuador, and Peru. Its natural habitat is subtropical or tropical moist montane forest. 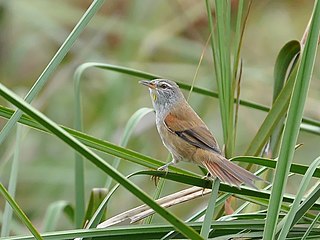 The sulphur-bearded reedhaunter is a species of non-migratory bird in the family Furnariidae. It is found in the Pampas and adjacent areas of eastern Argentina, southern Uruguay, and Rio Grande do Sul, Brazil. Its natural habitats are marshes with dense reed beds. Previously included in the genus Cranioleuca, but genetic evidence revealed that L. sulphuriferus is the sister species of Limnoctites rectirostris. 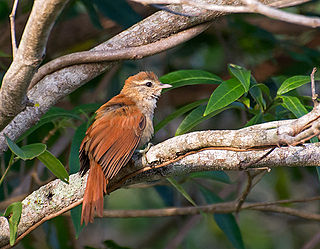 The rusty-backed spinetail is a Neotropical species of bird in the Furnariidae (ovenbird) family. The taxon from Panama is considered a separate species, the Coiba spinetail.

The red-shouldered spinetail is a species of bird in the ovenbird family Furnariidae. It is endemic to the Caatinga region of north-eastern Brazil. It is threatened by habitat loss. 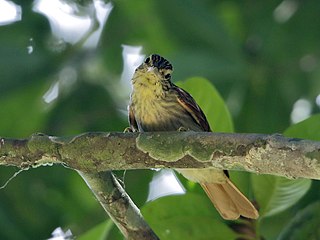 The eastern woodhaunter, also known as the Amazonian woodhaunter, is a species of bird in the family Furnariidae. It was formerly treated as conspecific with the western woodhaunter and when lumped had the name "striped woodhaunter". It is found in the western part of the Amazon rainforest: west Brazil, southeast Colombia, east Ecuador, northeast Peru, south Venezuela and north Bolivia. Its natural habitats are subtropical or tropical moist lowland forests and subtropical or tropical moist montane forests. The species nests in earth tunnels. 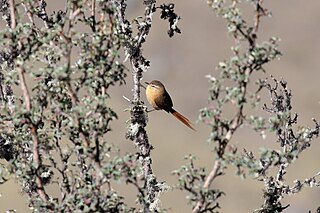 The tawny tit-spinetail is a species of bird in the family Furnariidae. It is found in Peru, Bolivia and far northwestern Argentina.

The straight-billed reedhaunter is a South American bird species in the family Furnariidae.

The chestnut-winged foliage-gleaner is a species of bird in the family Furnariidae. It is found in Bolivia, Brazil, Colombia, Ecuador, Peru, and Venezuela. Its natural habitat is subtropical or tropical moist lowland forest. 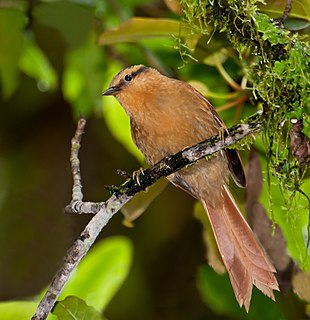 The buff-fronted foliage-gleaner is a species of bird in the family Furnariidae, the ovenbirds. It is found in southeastern regions of South America in the cerrado and pantanal of Brazil and Paraguay as well as areas of southeast coastal Brazil; also extreme northeast Argentina. In western Andean and northwest South America, it is found in Venezuela, Colombia, Ecuador, Peru and Bolivia; and in the northwest, it is also found in Panama and Costa Rica.

The white-throated treerunner is a species of bird in the family Furnariidae. It is the only species in the genus Pygarrhichas. The white-throated treerunner is about 15 cm (5.9 in) long, with a stiff and rounded tail. The upperparts are dark brown, turning red on the lower back and tail and contrasting sharply with the throat and chest of a bright white. The rest of the underparts are coarsely mottled with white. The bill is long, slightly curved upwards. The general appearance is reminiscent of a nuthatch, although they are not directly related. Like the Sittidae, Furnariidae tirelessly scours the trunks and branches of old trees for the small arthropods that make up its food, spiraling up the trunks, or sometimes moving head down. The white-throated treerunner consumes small invertebrates found on bark and nests in tree cavities. Outside of the breeding season, it may form mixed-species foraging flocks with other bird species. 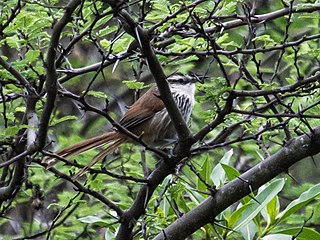 The great spinetail is a species of bird in the family Furnariidae. It is endemic to Peru where its natural habitat is Mediterranean-type shrubby vegetation. It is threatened by habitat loss.

The striped treehunter is a species of bird in the family Furnariidae with a dusky-brown coloring with prominent buff streaking on the wings, throat, and breast. It is found in humid to wet montane forest that range locally in the Andes from west Venezuela to west Bolivia most often at elevations of 1500–2500 m. It is most often mistaken for and with the larger flammulated treehunter due to many physical and behavioral similarities. 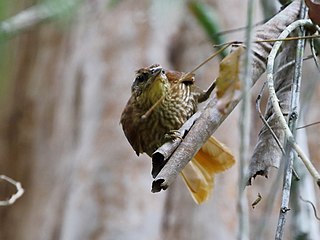 Thripophaga is the genus of birds that popularly are known as softtails. They are members of the ovenbird family, Furnariidae. They are found in wooded and shrubby habitats, sometimes near water, in South America. 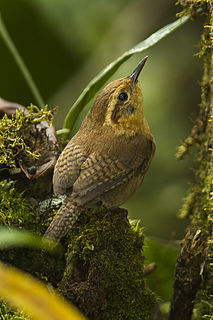 The mountain wren is a species of bird in the family Troglodytidae. It is found in the Andes of northwestern Argentina, Bolivia, Colombia, Ecuador, Peru, and western Venezuela.