Roller coasters are amusement rides developed for amusement parks and modern theme parks. During the 16th and 17th centuries, rides consisting of wooden sleds that took riders down large slides made from ice were popular in Russia. The first roller coasters, where the train was attached to a wooden track, first appeared in France in the early 1800s. [1] Although wooden roller coasters are still being produced, steel roller coasters are more common and can be found on every continent except Antarctica. [2]

Ranked by height, speed, length, inversions, and steepness, roller coasters are also rated through public opinion polls. Amusement parks often compete to build the tallest, fastest, and longest rides to attract thrill seekers and boost overall park attendance. [3] However, many records do not usually last long. When Magnum XL-200 opened in 1989, it began a new era of roller coasters and increased competition among parks to set new world records. The Magnum XL–200 was the first complete-circuit roller coaster built over 200 feet (61 m). [4] [5] Other notable roller coasters include Formula Rossa which reaches a top speed of 149 miles per hour (240 km/h), [6] Kingda Ka which stands at 456 feet (139 m) tall, [7] Steel Dragon 2000 which measures 8,133 feet (2,479 m) in length. [8] and The Smiler which features fourteen inversions.

This listing contains all types of roller coaster inversions. 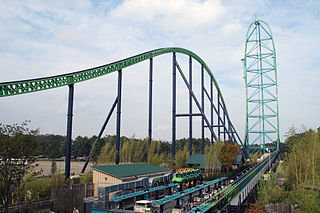 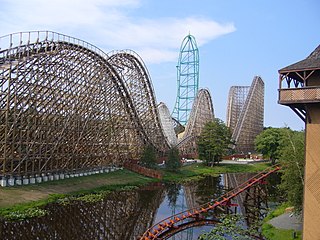 El Toro is a wooden roller coaster located at Six Flags Great Adventure in Jackson Township, New Jersey. Designed by Intamin of Switzerland, the wooden coaster opened to the public on June 11, 2006. Intamin contracted Rocky Mountain Construction (RMC) to build the ride, and the coaster's track was prefabricated, allowing for quicker installation and lower construction costs. When it opened, it had the steepest drop of any wooden roller coaster in the world at 76 degrees, until the record was broken by T Express in 2008 by one degree. Overall, its structure height of 181 feet (55 m) is ranked fourth, its drop height of 176 feet (54 m) is ranked second, and its top speed of 70 miles per hour (110 km/h) is ranked fourth among all wooden roller coasters in the world. It was also the first wooden roller coaster to use a cable lift as opposed to the traditional chain lift.

Roller Coaster DataBase (RCDB) is a roller coaster and amusement park database begun in 1996 by Duane Marden. It has grown to feature statistics and pictures of over 10,000 roller coasters from around the world.

Montu is an inverted roller coaster at Busch Gardens Tampa in Tampa, Florida. Built by Swiss manufacturer Bolliger & Mabillard, it is the park's second roller coaster designed by that company following the success of Kumba, which opened 3 years prior. When the ride opened on May 16, 1996, it was the world's tallest and fastest inverted roller coaster, a title it has since conceded to Alpengeist at sister park Busch Gardens Williamsburg. The ride stands 150 feet (46 m) tall and reaches speeds of 60 miles per hour (97 km/h). 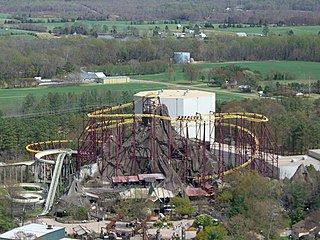 Polercoaster is a type of amusement ride offered by US Thrill Rides and Intamin. An installation consists of a large tower structure which features glass elevators to an observation deck, as well as a steel roller coaster wrapping around the tower. The model was first introduced in 2012, and as of November 2013, four have been proposed for construction. However, neither of them have been constructed as of 2020. 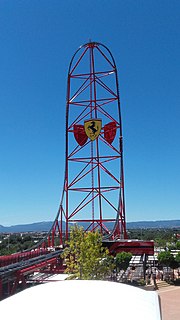 Troy is a wooden roller coaster located at Toverland in Sevenum, the Netherlands. It was manufactured by American manufacturer Great Coasters International (GCI) and opened on 29 June 2007. Troy was GCI's second roller coaster in Europe, following Thunderbird at PowerPark in Finland. With a height of 31.9 metres (105 ft), a maximum speed of 86.9 kilometres per hour (54.0 mph), and a track length of 1,077.2 metres (3,534 ft), Troy is the tallest, fastest, and longest wooden roller coaster in the Netherlands as of 2018.