Margaret Sixel is an Australian and South African film editor. The wife of filmmaker George Miller since 1995, she is best known for her work as editor on his works, including Babe: Pig in the City (1998), Happy Feet (2006), and Mad Max: Fury Road (2015). For Mad Max: Fury Road, she won the Academy Award for Best Film Editing and the BAFTA Award for Best Editing.

Margaret Sixel was born in South Africa, and studied film editing at the Australian Film, Television and Radio School. In 1989, she earned a Specialist Extension Certificate in Film Editing. [1]

In 1984, Sixel began work as an assistant editor and dubber on the Australian television mini-series, The Last Bastion (1984), where she met one of the directors of the picture, and future collaborator, George Miller. In the following five years, Sixel worked as an assistant and assembly editor on various projects such as The Great Gold Swindle (1984), Emoh Ruo (1985), The Blue Lightning (1986), A Case of Honour (1989), and Romero (1989), as well as dialogue editor for John Duigan’s Flirting (1991).

In 1994, Sixel was appointed film editor for Kay Pavlou’s dramatized Australian documentary, Mary (1994), about Australian saint Mary MacKillop. Three years later, Sixel edited the television documentary 40,000 Years of Dreaming (1997) for director George Miller. During the early 2000s, Sixel edited two short films under the direction of English-born Australian filmmaker Rachel Ward, The Blindman’s Bluff (2000) and The Big House (2001). Sixel’s remaining three feature film projects have since all been collaborations between herself and director George Miller, beginning in 1998 with Babe: Pig in the City (co-edited alongside Jay Friedkin), and followed by Happy Feet (co-edited alongside Christian Gazal) in 2006, and Mad Max: Fury Road in 2015.

Margaret Sixel has creatively contributed to the production of numerous projects throughout her career, including Babe (1995), in which George Miller credits her for turning the picture around by “declaring an early cut [of the film] too episodic and lacking in narrative tension, and suggesting the linking devices of chapter headings and singing mice.” [2] She received a “Special Thanks” credit for the film, as well as a “Thanks” in the credits of Happy Feet Two for contributions to “the story structure.” [3]

In regard to their creative relationship, Sixel has remarked that both Miller and herself collaboratively make up a "complete person." [4] She has stated that being his spouse only helps in that they understand each other's sensibilities better, since "98 percent of the time [they] agree on [their] choices," which is important, "because when you are not in sync, lots of people have opinions in the editing room and you can really go off in the wrong direction." [5]

In 2012, Sixel began editing Mad Max: Fury Road under the direction of George Miller. When asked why he chose his wife to edit his film, Miller observed that she had never cut an action movie before, and that if it were to be edited by "the usual kind of guys, it would look like every other action movie we see." [6]

Because the majority of the film revolves around an intense road battle, featuring dozens of vehicular stunts and hundreds of individual extras, the location team would shoot with upwards of 20 cameras on any given set up. [7] As a result, the editorial team on location processed between 10 and 20 hours of footage on a daily basis, which had to be flown back to Sydney, Australia, where Sixel and her editorial team would work on shaping the footage in conjunction with production. [7] By the time principal photography had wrapped, Sixel was given over 470 hours of footage to edit, which took three months to merely view in its entirety. [6] [7]

For two years, Sixel worked for roughly 10 hours a day, 6 days a week, for a total of over 6,000 collective hours of editing to create the film's eventual 120 minute running length. [6] The final edit of the film consisted of over 2,700 individual cuts, over twice as many as Miller's previous Mad Max installment, The Road Warrior (1981), which featured only 1,200 cuts in its 90-minute running time. [8]

Editorial team and role of gender

In regard to her role as a woman editor, Sixel has stated that she doesn't consider her gender to be relevant in the editing process. [5] In an interview, she has stated that she works "with a lot of guys in the editing room. We don't think about it. I'm really into cutting film, and while George [Miller] likes to think it's a positive, I don't feel very female about it." [5] In regard to her editorial team, Sixel has noted that 25 percent of her staff are women. [5] Additionally, throughout her entire career working with Miller, Jason Ballantine has been her first assistant and additional editor on every feature film since Babe: Pig in the City in 1998.

In 1995, Margaret Sixel married director George Miller; they have two sons, and Sixel has a stepdaughter from Miller’s previous marriage. [2] [5]

In 2011, as a response to the tenth anniversary of the Tampa affair in 2001, the Australian Centre for Policy Development published a statement urging Australia’s political leaders to break the stalemate on refugees and asylum seekers, which was “still sadly characterised by human tragedy, political opportunism, policy failure and great cost.” [13] Both Margaret Sixel and her husband, George Miller, supported and signed the public statement. 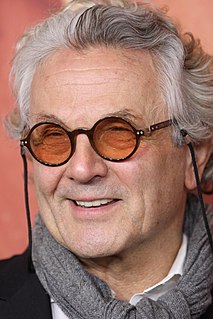 George Miller is an Australian filmmaker best known for his Mad Max franchise, whose second installment, Mad Max 2, and fourth, Fury Road, have been hailed as two of the greatest action films of all time, with Fury Road winning six Academy Awards. Miller is very diverse in genre and style as he also directed the biographical medical drama Lorenzo's Oil, the dark fantasy The Witches of Eastwick, the Academy Award-winning animated film Happy Feet, produced the family-friendly fantasy adventure Babe and directed the sequel Babe: Pig in the City.

Joy Smithers is an Australian actress, best known for her acting performances on television, and her role as a television news presenter, such as with MTV Australia in the late 1980s. 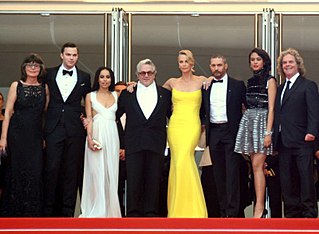 Doug Mitchell is a film producer.

Colin Gibson is an Australian production designer. He is known for his collaborations with George Miller, including Babe, Babe 2: Pig in the City, Happy Feet, Happy Feet Two, and Mad Max: Fury Road, the latter of which resulted in winning the Academy Award for Best Production Design and an AACTA Award. Gibson's other work includes The Adventures of Priscilla, Queen of the Desert, for which he shared a BAFTA award nomination with Owen Paterson.

The 36th Boston Society of Film Critics Awards, honoring the best in filmmaking in 2015, were given on December 11, 2015.

The 66th American Cinema Editors Eddie Awards were presented on January 29, 2016 at the Beverly Hilton Hotel, honoring the best editors in films and television.

Lesley Vanderwalt is a New Zealand cinematic hair designer and makeup artist. Vanderwalt was raised and began her career in New Zealand before moving to Australia, where she has frequently collaborated with directors such as George Miller and Baz Luhrmann. She has worked as a hair or makeup supervisor on TV shows and films including Mad Max 2: The Road Warrior, Farscape, Moulin Rouge!, Star Wars: Episode II – Attack of the Clones, and The Great Gatsby. In 2016, she won the Academy Award for Best Makeup and Hairstyling at the 88th Academy Awards and a BAFTA Award for Best Makeup and Hair in the 69th British Academy Film Awards for her work overseeing hair and makeup on the movie Mad Max: Fury Road.