Last updated June 16, 2020
This article is about the American company Micron. For for the Russian microelectronics company, see Mikron Group.
For other uses, see Micron (disambiguation).
American multinational corporation based in Boise, Idaho which produces semiconductor devices

Micron Technology, Inc. is an American producer of computer memory and computer data storage including dynamic random-access memory, flash memory, and USB flash drives. It is headquartered in Boise, Idaho. Its consumer products are marketed under the brands Crucial [3] and Ballistix. Micron and Intel together created IM Flash Technologies, which produces NAND flash memory. It owned Lexar between 2006 [4] and 2017. [5]

Micron was founded in Boise, Idaho, in 1978 [6] by Ward Parkinson, Joe Parkinson, Dennis Wilson, and Doug Pitman as a semiconductor design consulting company. [7] Startup funding was provided by local Idaho businessmen Tom Nicholson, Allen Noble, Rudolph Nelson, and Ron Yanke. Later it received funding from Idaho billionaire J. R. Simplot, whose fortune was made in the potato business. In 1981, the company moved from consulting to manufacturing with the completion of its first wafer fabrication unit ("Fab 1"), producing 64K DRAM chips.

In 1994, founder Joe Parkinson retired as CEO and Steve Appleton took over as Chairman, President, and CEO. [6]

A 1996 3-way merger among ZEOS International, Micron Computer, and Micron Custom Manufacturing Services (MCMS) increased the size and scope of the company; [6] this was followed rapidly with the 1997 acquisition of NetFrame Systems, in a bid to enter the mid-range server industry. [9]

In 2000, Gurtej Singh Sandhu and Trung T. Doan at Micron initiated the development of atomic layer deposition high-k films for DRAM memory devices. This helped drive cost-effective implementation of semiconductor memory, starting with 90-nm node DRAM. [10] [11] Pitch double-patterning was also pioneered by Gurtej Singh Sandhu at Micron during the 2000s, leading to the development of 30-nm class NAND flash memory, and it has since been widely adopted by NAND flash and RAM memory manufacturers worldwide. [10] [12]

In 2008, Micron spun off Aptina Imaging, which was acquired by ON Semiconductor in 2014. Micron retained a stake in the spinoff. [17] The core company suffered setbacks, however, requiring layoffs of 15 percent of its workforce in October 2008, [18] [19] during which period the company also announced the purchase of Qimonda's stake in Inotera technologies for $400 million. [20] The trend of layoffs and acquisitions continued in 2009 with the termination of an additional 2,000 employees, [21] [22] and the acquisition of the FLCOS microdisplay company Displaytech. [23] Micron agreed to buy flash-chip maker Numonyx for $1.27 billion in stock in February 2010. [24]

In the 2012–2014 period, Micron again went through an acquisition-layoff cycle, becoming the majority shareholder of Inotera Memories, purchasing Elpida Memory [30] for $2 billion and the remaining shares in Rexchip, a PC memory chip manufacturing venture between Powerchip and Elpida Memory for $334 million, [31] [32] while announcing plans to lay off approximately 3,000 workers. [33] [34] Through the Elpida acquisition, Micron became a major supplier to Apple Inc. for the iPhone and iPad. [30]

In December 2016, Micron finished acquiring the remaining 67% of Inotera’s stake and made Inotera a 100% subsidiary of Micron in Taiwan. [35]

In April 2017, Micron announced Sanjay Mehrotra as the new President and CEO to replace Mark Durcan. [36] [37]

In June 2017, Micron announced it was discontinuing the Lexar retail removable media storage business and putting some or all it up for sale. [38] In August of that year the Lexar brand was acquired by Longsys, a flash memory company based in Shenzhen, China. [5]

In May 2018, Micron Technology and Intel launched QLC NAND memory to increase storage density. [40] The company ranked 150th on the Fortune 500 list of largest United States corporations by revenue. [41]

In February 2019, the first microSD card with a storage capacity of 1 terabyte (TB) was announced by Micron. [42] 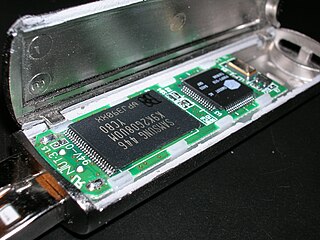 Phase-change memory (also known as PCM, PCME, PRAM, PCRAM, OUM and C-RAM or CRAM is a type of non-volatile random-access memory. PRAMs exploit the unique behaviour of chalcogenide glass. In the older generation of PCM, heat produced by the passage of an electric current through a heating element generally made of TiN was used to either quickly heat and quench the glass, making it amorphous, or to hold it in its crystallization temperature range for some time, thereby switching it to a crystalline state. PCM also has the ability to achieve a number of distinct intermediary states, thereby having the ability to hold multiple bits in a single cell, but the difficulties in programming cells in this way has prevented these capabilities from being implemented in other technologies with the same capability.

Lexar is a brand of flash memory products manufactured by the Chinese company Longsys. 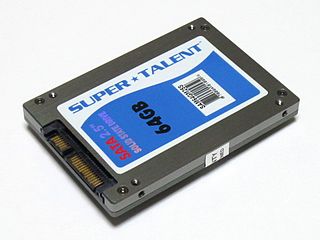 A solid-state drive (SSD) is a solid-state storage device that uses integrated circuit assemblies to store data persistently, typically using flash memory, and functioning as secondary storage in the hierarchy of computer storage. It is also sometimes called a solid-state device or a solid-state disk, even though SSDs lack the physical spinning disks and movable read–write heads used in hard drives ("HDD") or floppy disks. 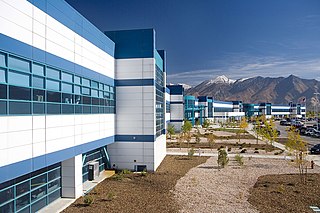 IM Flash Singapore LLP is a semiconductor company founded in February 2007, by Micron Technology and Intel Corporation. The joint-venture was set up to produce NAND Flash memory for the 2 owners, and was the second site set up, after the success of IM Flash Technologies. It was located in Senoko, Singapore.

A non-volatile dual in-line memory module (NVDIMM) is a type of random-access memory for computers. Non-volatile memory is memory that retains its contents even when electrical power is removed, for example from an unexpected power loss, system crash, or normal shutdown. "Dual in-line" identifies the memory as using the DIMM package. NVDIMMs improve application performance and system crash recovery time. They enhance solid-state drive (SSD) endurance and reliability.

Crossbar is a company based in Santa Clara, California. Crossbar develops a class of non-volatile resistive random-access memory (RRAM) technology. The company in 2013 announced its goal was a terabyte of storage on a single integrated circuit, compatible with standard CMOS semiconductor manufacturing processes.

High Bandwidth Memory (HBM) is a high-speed computer memory interface for 3D-stacked SDRAM from Samsung, AMD and SK Hynix. It is used in conjunction with high-performance graphics accelerators, network devices and in some supercomputers. The first HBM memory chip was produced by SK Hynix in 2013, and the first devices to use HBM were the AMD Fiji GPUs in 2015.

3D XPoint is a non-volatile memory (NVM) technology developed jointly by Intel and Micron Technology. It was announced in July 2015 and is available on the open market under brand names Optane (Intel) and subsequently QuantX (Micron) since April 2017. Bit storage is based on a change of bulk resistance, in conjunction with a stackable cross-gridded data access array. Initial prices are less than dynamic random-access memory (DRAM) but more than flash memory.

ATP Electronics is a manufacturer of NAND based storage DRAM modules founded in Silicon Valley in 1991, headquarter was later moved to Taipei, Taiwan. ATP’s product line consist of Industrial grade products, such as SSD, SD / microSD memory cards, along with DRAM products that are used in business industries across Networking, Enterprise Mobility, Automotive industry, Military, IPC/Embedded Systems, Health care, Gaming and The Internet of Things (IoT). Intel's CMTL, one of the largest third party testing lab for Intel server platforms, only recommended two memory modules companies to purchase motherboards in Taiwan, one noted to be ATP Electronics.