The Mi-4 was designed in response to the American H-19 Chickasaw and the deployment of U.S. helicopters during the Korean War. While the Mi-4 strongly resembles the H-19 Chickasaw in general layout, including the innovative engine position in front of the cockpit, it is a larger helicopter, able to lift more weight and built in larger numbers. The first model entered service in 1953. The helicopter was first displayed to the outside world in 1952 at the Soviet Aviation Day in Tushino Airfield.

One Mi-4 was built with a jettisonable rotor. It served as an experimental vehicle for future pilots' means of safety and ejection designs. [3]

The Mi-4 transport helicopter laid the beginning of the Soviet Army Aviation. It was widely used both in the armed forces and in Soviet civil aviation, and for several decades remained the main type of helicopter in the inventory of the Soviet Armed Forces and of the Civil Air Fleet. The Mi-4 went out of service with the development of the Mi-8. It is no longer used by the Russian Air Force, though it remained in service in some countries as a utility helicopter or as a military transport a while longer. Albania was thought to be the final country using the helicopter and by 2005 all were out of service. The Mi-4 played a very important role in the Bangladesh liberation war of 1971. The Mi-4 was the workhorse of the Indian Air Force [4] covering the medium lift role at the time. A highly successful heli-borne operation, the Meghna Heli Bridge, using Mi-4s helped the Indian Army's 57 Mountain Division clear the Meghna River. The helilift of a battalion of Indian troops to the outskirts of Sylhet was the first heli-borne operation of the Indian army.

Much like the UH-1 Huey, after it was gradually phased out of military service, it was used in various domestic roles: search and rescue, firefighting, polar expeditioning, construction site cargo helicopter, commercial flights and many others. [3]

An official video of a North Korean Air Force combat flying skills competition released in 2014 shows that the Mi-4 is still in limited service in North Korea. [5] 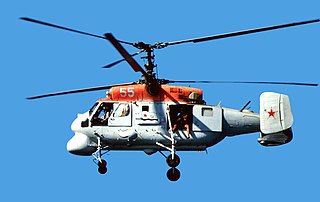 The Kamov Ka-25 is a naval helicopter, developed for the Soviet Navy in the USSR from 1958. 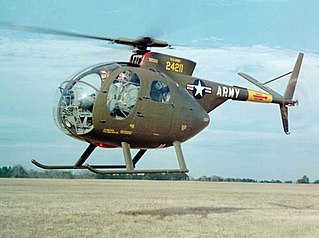 The Hughes OH-6 Cayuse is a single-engine light helicopter with a four-bladed main rotor used for personnel transport, escort and attack missions, and observation. Hughes Helicopters also developed the Model 369 as a civilian helicopter, and the Hughes Model 500, currently produced by MD Helicopters as the MD 500.

The Mil Mi-2 is a small, lightly armed turbine-powered transport helicopter that could also provide close air support when armed with 57 mm rockets and a 23 mm cannon. 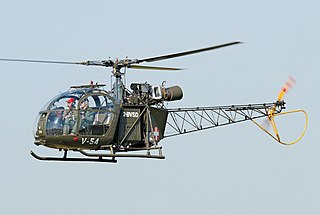 The Aérospatiale Alouette II is a French light helicopter originally manufactured by Sud Aviation and later Aérospatiale. It was the first production helicopter powered by a gas turbine engine instead of the heavier conventional piston powerplant. 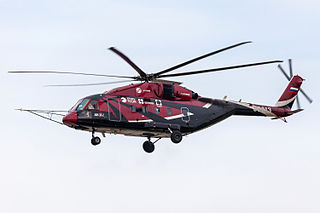 The Mil Mi-38 is a transport helicopter designed by Mil Moscow Helicopter Plant and being developed by Kazan Helicopters. Originally intended as a replacement for the Mil Mi-8 and the Mi-17, it is being marketed in both military and civil versions. It flew for the first time on 22 December 2003 and was certified on 30 December 2015. 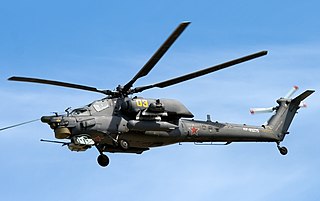 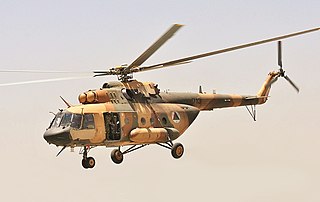 The Mil Mi-17 was a Soviet and current Russian military helicopter in production at two factories in Kazan and Ulan-Ude. It is known as the Mi-8M series in Russian service. The helicopter is mostly used as medium twin-turbine transport helicopter, as well as an armed gunship version. 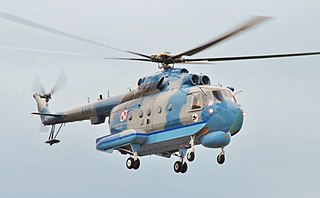 The Mil Mi-14 is a Soviet shore-based nuclear-capable amphibious anti-submarine helicopter derived from the earlier Mi-8. 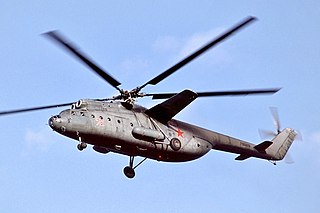 The Mil Mi-6, given the article number izdeliye 50 and company designation V-6, is a Soviet/Russian heavy transport helicopter that was designed by the Mil design bureau. It was built in large numbers for both military and civil roles and used to be the largest helicopter in production until Mil Mi-26 was put in production in 1980. 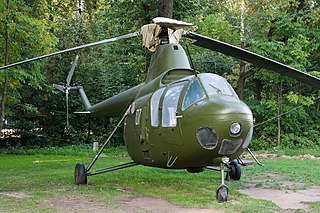 The Mil Mi-1 was a Soviet three- or four-seat light utility helicopter. It was the first Soviet helicopter to enter serial production. It is powered by one 575 hp Ivchenko AI-26V radial. It entered service in 1950 and was first seen on the 1951 Soviet Aviation Day, Tushino and was produced for 16 years. More than 1,000 were built in the USSR and 1,594 in Poland, as SM-1.

The Kamov Ka-60 Kasatka (Russian: "Касатка", is a Russian medium twin-turbine military transport helicopter under development by Kamov. It performed its first flight on 24 December 1998. 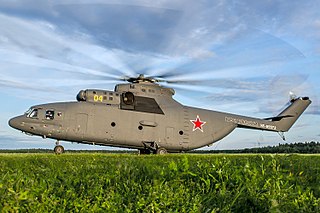 The Mil Mi-26 is a Soviet/Russian heavy transport helicopter. Its product code is izdeliye 90. Operated by both military and civilian operators, it is the largest and most powerful helicopter to have gone into serial production. 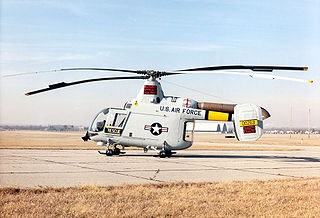 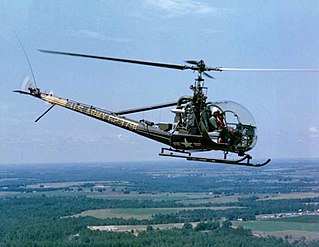 The Hiller OH-23 Raven is a three-place, military light observation helicopter based on the Hiller Model 360. The Model 360 was designated by the company as the UH-12, which was first flown in 1948. 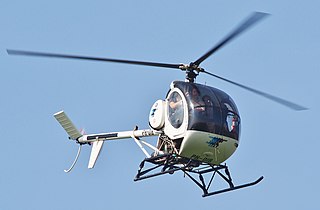 The Schweizer S300 series family of light utility helicopters was originally produced by Hughes Helicopters, as a development of the Hughes 269. Later manufactured by Schweizer Aircraft, and currently produced by Schweizer RSG, the basic design has been in production for over 50 years. The single, three-bladed main rotor and piston-powered S300 is mostly used as a cost-effective platform for training and agriculture. 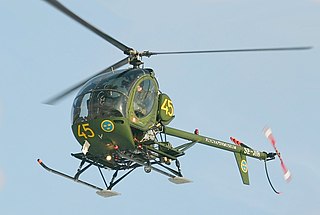 The Hughes TH-55 Osage is a piston-powered light training helicopter produced for the United States Army. It was also produced as the Model 269 family of light utility helicopters, some of which were marketed as the Model 300. The Model 300C was produced and further developed by Schweizer after 1983.

The Westland WS-51 Dragonfly helicopter was built by Westland Aircraft and was a licence-built version of the American Sikorsky S-51. 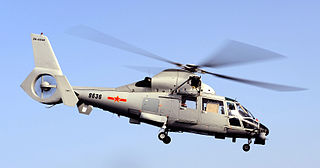 The Harbin Z-9 is a Chinese military utility helicopter with civilian variants. It is a licensed variant of the French Eurocopter AS365 Dauphin, and is manufactured by Harbin Aircraft Manufacturing Corporation. 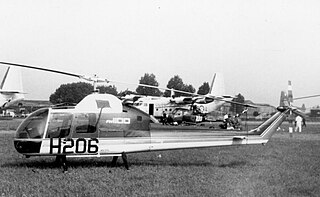 The Fairchild Hiller FH-1100 is a single-engine, single two-bladed rotor, light helicopter which began as a design entry into the United States Army's Light Observation Helicopter program as the Hiller YOH-5. The Hiller Model 1100 was not selected but after Hiller Aircraft was purchased by Fairchild Stratos in 1964, the Model 1100 was successfully marketed as a civilian helicopter, the FH-1100. The type certificate is now held by the FH1100 Manufacturing Corporation of Century, Florida.