Last updated July 31, 2021
This article is about the municipality in India. For its namesake district, see Shimoga district.
City Corporation in Karnataka, India

Shimoga, officially known as Shivamogga, [2] is a city and the district headquarters of Shimoga district in the central part of the state of Karnataka, India. The city lies on the banks of the Tunga River. Being the gateway for the hilly region of the Western Ghats, the city is popularly nicknamed as "Gateway of Malnad" [3] (ಮಲೆನಾಡಿನ ಹೆಬ್ಬಾಗಿಲು). The population of Shimoga city is 322,650 as per 2011 census. [1] The city has been selected for the Smart Cities project, standing in the fourth position in the state and 25th in the country as of November 2020. [4]

The city is 569 m above sea level and is surrounded by lush green paddy fields, arecanut and coconut groves. It is located 267 km from the state capital Bangalore and 195 km from the port city Mangalore [5]

The district formed the southern tip of the Emperor Ashoka's Mauryan Empire in the third century BC.[ citation needed ] It was ruled during later centuries by the Kadambas (4th century), Chalukyas (6th century), Ganges, Rashtrakutas (8th century), Hoysalas (11th century), and the Vijayanagara rulers (15th century). The city got an independent identity under the Keladi Nayakas' rule during the 16th century[ citation needed ]. From the late 17th century, the city had been a part of the Kingdom of Mysore until the independence of India in 1947, when the Mysore state merged into the Republic of India.

During the Satyagraha movement, Mahatma Gandhi also visited the place to instigate the fight for national freedom. [5]

The village of Gajanur hosts a Jawahar Navodaya Vidyalaya (central school) which is a boarding school. Kuvempu University is located in Shankarghatta, at a distance of 20 km from Shimoga.

Kannada is the most widely spoken language in Shimoga. [12]

According to the Shimoga City Municipal Corporation, [13] the city has a total area of about 50 square kilometres (19 sq mi). Most/all these hills are part of the Western Ghats, a region known for plentiful rainfall and lush greenery and declared during 2012 as a World Heritage site. Tunga River flows through Shimoga.

The climate is tropical wet and dry (Köppen climate classification) summer average temperature 20–35 °C (68–95 °F). This means that the winter and the early part of summer are typically dry periods. The majority of the rainfall occurs between June and early October. Shimoga is a part of a region known as Malnad (land of hills) in Karnataka. Yearly, the rainfall aggregates up to 3295mm of precipitation. [14] January and February are the driest months, July the wettest, and April is the warmest month with an average high temperature of 35.5 degrees Celsius (95.9 degrees F).Coldest months of Shimoga are July, August, November and December with average high temperature of 27 degrees Celsius (80.6 degrees F). [14] In summer (April–May), temperature crosses 36 °C at Shimoga. [15]

APMC of Shimoga is main marketing point of arecanut, the major commercial crop grown in the district and well as in neighbouring districts like Uttara Kannada. Shimoga has the biggest areca nut market, and known for procuring high quality areca nuts. Other agricultural produces like rice, chili, coconut etc. are also marketed in APMC.

Shimoga IT Park is an information technology hub built just outside Shimoga near the upcoming Shimoga Airport. The IT Park consists of a 100000 sq ft office building with 24/7 electrical capacity, diesel backup generators, and high speed T1 data connections for use by IT industries such as data centres, call centres, aerospace, robotics, etc. [23]

The city has two railway stations, and there are trains that run to and from Bangalore, Mysore, Tirupati and Chennai.

Karnataka is the largest state in South India and sixth largest in India. The state is in the south western region of India. It was formed on 1 November 1956, with the passage of the States Reorganisation Act. Originally known as the State of Mysore, it was renamed Karnataka in 1973. The state corresponds to the Carnatic region. Its capital and largest city is Bangalore.

Mangalore is a major port city of the Indian state of Karnataka. It is located between the Arabian Sea and the Western Ghats about 352 km (219 mi) west of Bangalore, the state capital, 20 km north of Karnataka–Kerala border, 297 km south of Goa and 416 km north of Kochi. Mangalore is the state's only city to have all four modes of transport—air, road, rail and sea. The population of the urban agglomeration was 619,664 according to the 2011 national census of India. It is best known for being one of the locations of the Indian strategic petroleum reserves.

Belgaum is a city in the Indian state of Karnataka located in its northern part along the Western Ghats. It is the administrative headquarters of the eponymous Belgaum division and Belgaum district. The Government of Karnataka has proposed making Belgaum the second capital of Karnataka, hence a second state administrative building Suvarna Vidhana Soudha was inaugurated on 11 October 2012.

Davanagere also called Bennenagari is a city in the centre of the southern Indian state of Karnataka. It is the seventh largest city in the state, and the administrative headquarters of eponymous Davangere district. Hitherto being a cotton hub and hence popularly known before as the Manchester of Karnataka, the commercial ventures of the city is now dominated by education and agro-processing industries. Davanagere became a separate district in 1997, when it was separated from the erstwhile undivided district of Chitradurga for administration conveniences. Davanagere is known for rich culinary traditions which encompass the diversity of entire Karnataka's dishes due to its geographical position in the state as its centre. Notable among them is its aromatic benne dose that is associated with the name of the city. The city has seen a drastic growth in recent years and is one of fastest growing cities in karnataka. 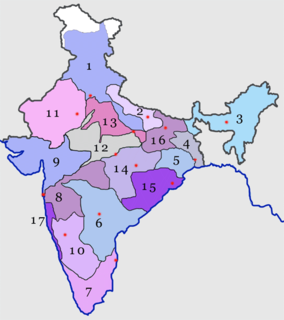 The South Western Railway (SWR) is one of the 18 railway zones in India, headquartered at Hubballi in Karnataka State. SWR was created from carving out the routes from Southern Railways and South Central Railways in 2003. 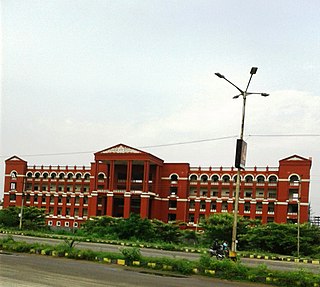 Hassan is a city and the district headquarters of Hassan district in the Indian state of Karnataka. The village is situated 980 m (3,220 ft) above sea level. It is named after the Hasanamba temple. The urban population in 2011 was 133,436. It is situated at a distance of 182 km from the state capital, Bangalore, and 166 km from Mangalore. 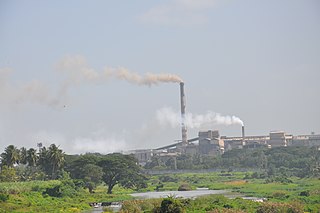 Bhadravati or Bhadravathi is an industrial city or Steel Town and taluk in the Shivamogga District of Karnataka state, India. It is situated at a distance of about 255 kilometres (158 mi) from the state capital Bengaluru and at about 20 kilometres (12 mi) from the district headquarters, Shivamogga. The town is spread over an area of 67.0536 square kilometres (25.8895 sq mi) and has a population of 151,102 as per the census held in 2011. 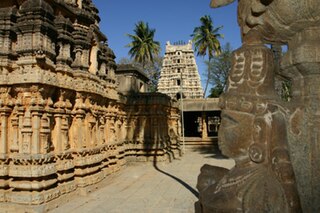 Kolar is a city in the Indian state of Karnataka. It is the headquarters of Kolar district. The city is known for its milk production and the gold mines. It is also known for Someshwara temple and the Kolaramma temple.

Tumkur, officially renamed as Tumakuru, is a major industrial city located in the southern part of Indian state of Karnataka. Tumkur is situated at a distance of 70 km (43 mi) northwest of Bangalore, the state capital along NH 48 and NH 73. It is the headquarters of the Tumkur district. It is located at an altitude of 835 m (2739.5 ft).

Hosahali is one of twin-villages Mattur-Hosahali, on the banks of the Tunga River in Karnataka state, southern India. It lies in an agricultural region where the main crop is the Areca nut. It is known for Sanskrit, Veda, Gamaka (story-telling) and Sangeetha. From above, the village appears as a "Paa Ni Pee Tha". The village is situated a little over 5 km from Shimoga city and around 4 km from Gajanur Tunga Anicut (dam). 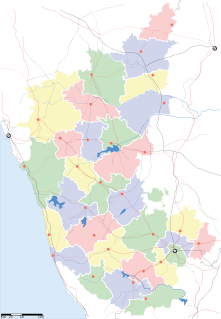 Karnataka, a state in South India has a well-developed transport system. Its capital city, Bengaluru is well-connected by air to domestic and international destinations and the Kempegowda International Airport (KIA) in the city is one of the busiest airports in India. It was also the headquarters of the airlines Air Deccan and Kingfisher Airlines. The road transport is also well developed in the state with many National and State highways providing means for fast transportation. The headquarters of the South-Western Railway division of Indian Railways is located at Hubballi and this division governs most of the railway network in the state. Konkan Railway which passes along the coastal region of the state is considered one of the toughest engineering projects being undertaken in India till date. Buses, cars and trains are the means of transport for moving across distant places in Karnataka. For transportation within the city or town limits; motorbikes, cars, autorickshaws and buses are used. With the advent of low-cost airlines, many people are choosing to travel via air as well. 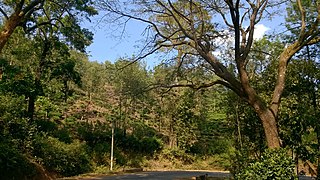 Koppa is a panchayat town in Chikkamagaluru district in the Indian state of Karnataka. It is the headquarters of Koppa sub-district. Koppa is located at 13.53°N 75.36°E.

Mangalore's location in the Indian state of Karnataka makes it accessible by all forms of transport: road, rail, air and sea. It is the largest city in the Coastal Karnataka region, and is the only city in Karnataka and one among the six cities in India to have an International Airport, a Major Seaport, railway & road connectivities. It is one of the fastest developing cities in India.

Shivamogga Airport is a greenfield airport to be built at Sogane Village, 8.8 km (5.5 mi) from Shivamogga and 8.2 km (5.1 mi) from Bhadravathi in Karnataka, India. The airport was to be built under Public–private partnership (PPP) with the Government of Karnataka (GoK). However, due to delays in project execution, the contract was terminated in January 2015. On 15 June 2020, Karnataka chief minister B. S. Yediyurappa laid the foundation to start the construction of Shivamogga airport at the cost of The ₹220-crore. The chief minister said the airport, to be constructed in two phases, will be completed in about a year.

Sagara is a city located in the Indian state of Karnataka and it is also a sub divisional and a taluk headquarters. Located in the Sahyadri Mountain range on the banks of river Varada, it is known for its proximity to Jog Falls and to the historical places of Ikkeri, Keladi and Varadamoola. The river Varada originates near Varada-moola. Sagara subdivision consists of Sagara, Soraba, Hosanagara and Shikaripur taluks. 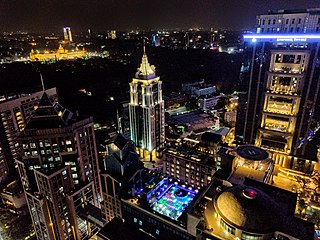 Bangalore, officially known as Bengaluru, is the capital and the largest city of the Indian state of Karnataka. It has a population of more than 8 million and a metropolitan population of around 11 million, making it the third most populous city and fifth most populous urban agglomeration in India. Located in southern India on the Deccan Plateau, at a height of over 900 m (3,000 ft) above sea level, Bangalore is known for its pleasant climate throughout the year. Its elevation is the highest among the major cities of India.