Simon Haynes or Heynes (died 1552) was Dean of Exeter between 1537 and 1552 and a signatory of the decree that invalidated the marriage of Henry VIII with Anne of Cleves. [1]

Haynes was educated at Queens' College, Cambridge. [2] He graduated B.A. in 1516, was elected fellow of his college in 1516, proceeded M.A. in 1519, and had a title for orders from Queens' College in February 1521. He took part in the expulsion of Dr. John Jennins from the presidency of Queens' in 1518, and in 1528 was himself elected president. Being empowered by the college to make bargains and covenants at his discretion, he alienated some of the estates belonging to the society. [3]

On 28 November 1528 Haynes was instituted to the rectory of Barrow, Suffolk. He was one of the delegates appointed by the senate to make a determination as to the king's divorce in 1529–30; commenced D.D. in 1531, and in 1532–3 and 1533–4 served the office of vice-chancellor. On 23 May 1533 he attested Thomas Cranmer's instrument of divorce at Dunstable, and in 1534 was admitted vicar of Stepney, Middlesex. During that year he and John Skip were selected by the court to preach at Cambridge against papal supremacy. [3]

In 1535 Haynes was sent with Christoper Mount as ambassador to France. At the end of the same year he was instituted to the rectory of Fulham, Middlesex, and on 24 December was installed canon of Windsor. On 16 July 1537 he was elected dean of Exeter, and in that capacity he attended the baptism of Prince Edward; and soon afterwards resigned the presidency of Queens' College. A letter in condemnation of the bill of the Six Articles, addressed by him to a member of parliament, is printed in John Strype's Ecclesiastical Memorials. [3]

In 1538 Haynes and Bishop Edmund Bonner were sent to Spain, and joined Sir Thomas Wyatt, the ambassador there. Offended by Wyatt's treatment of them, they later charged him with holding traitorous correspondence with Cardinal Reginald Pole and speaking disrespectfully of the king. Haynes signed the decree of 9 July 1540 invalidating the marriage of Henry VIII with Anne of Cleves, and on the following 17 Dec. the king made him one of the first prebendaries of Westminster. [3]

Haynes was a visitor of the university of Oxford, the college of Windsor, and Exeter Cathedral, and one of the commissioners against the Anabaptists. He also assisted in the compilation of the first English liturgy. He died in October 1552, leaving by his wife Joan Waleron, daughter of Nicholas Waleron, (who then married Archbishop William May) two sons, Joseph and Simon. [3]

John Taylor was an English churchman and academic, Bishop of Lincoln from 1552 to 1554.

John Taylor was Master of the Rolls of the Court of Chancery from 1527 to 1534, following a successful career as a priest and civil servant. 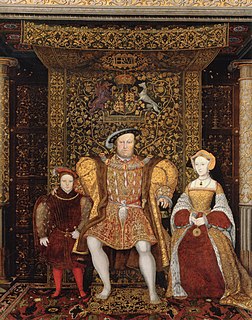 In common parlance, the wives of Henry VIII were the six queens consort of King Henry VIII of England between 1509 and his death in 1547. In legal terms, Henry had only three wives, because three of his marriages were annulled by the Church of England. However, he was never granted an annulment by the Pope, as he desired, for Catherine of Aragon, his first wife. Annulments declare that a true marriage never took place, unlike a divorce, in which a married couple end their union. Along with his six wives, Henry took several mistresses.

Sir Edward Neville was an English courtier. He was born at Abergavenny, Monmouthshire. He was the son of George Neville, 4th Baron Bergavenny and his wife Margaret, daughter of Hugh Fenn. He married Eleanor Windsor, daughter of Andrew Windsor, 1st Baron Windsor and Elizabeth Blount, before 6 April 1529. He was the brother of George Nevill, 5th Baron Bergavenny and the two of them became close to King Henry VIII and the Queen, Catherine of Aragon.