Gregory Dodds was Dean of Exeter between 1560 and 1570. [1] He had been prior of Cambridge Blackfriars at its dissolution. [2]

Benjamin Morgan Cowie was Dean of Manchester and then Exeter in the last quarter of the 19th century.

Valentine Cary, was an English clergyman, who became Bishop of Exeter.

Charles John Ellicott (1819–1905) was a distinguished English Christian theologian, academic and churchman. He briefly served as Dean of Exeter, then Bishop of the united see of Gloucester and Bristol.

The 1981–82 season was Cardiff City F.C.'s 55th season in the Football League. They competed in the 22-team Division Two, then the second tier of English football, finishing twentieth.

Stamford School is an English independent school for boys in the market town of Stamford, Lincolnshire. Founded in 1532, it has been a member of the Headmasters' and Headmistresses' Conference since 1920. With the girls-only Stamford High School and the coeducational Stamford Junior School, it is part of the Stamford Endowed Schools (SES). 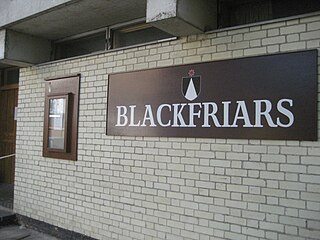 Cambridge Blackfriars is a priory in Cambridgeshire, England. It was established in 1238, dissolved in 1538 and re-established in 1938. It continues to operate as a Dominican priory and, in 2000, became the novitiate house of the English Province of the Order of Preachers.

Spencer Cecil Carpenter, was an Anglican priest and author. He was the Dean of Exeter in the Church of England from 1935 to 1950.

George William Lukin was the Dean of Wells between 1799 and his death on 27 November 1812.

Mark Overton, FAcSS, is a British agricultural historian and formerly Professor of Economic and Social History at the University of Exeter, where he was Deputy Vice-Chancellor from 2006 to 2013.