Jones was born on 27 June 1944 in Shrewsbury, England. [1] He received his secondary education at Ludlow Grammar School in Shropshire. He studied English literature at Selwyn College, Cambridge, graduating with a Bachelor of Arts (BA) degree in 1965: as per tradition, his BA was promoted to a Master of Arts (MA Cantab) degree. [2] From 1967 to 1969, he trained for holy Orders and studied theology at Cuddesdon College, an Anglo-Catholic theological college near Oxford. [3]

Jones was ordained at Southwark Cathedral and served a curacy in the parish of Limpsfield with Titsey, Surrey. In 1982 he was appointed vicar of St Mary-le-Tower, Ipswich in 1982, a position he held until 1995. [4] He served his first cathedral position as Priest-Vicar at St Albans Cathedral and was appointed the Rural Dean of Ipswich in 1992. He was an Honorary Canon of St Edmundsbury Cathedral between 1993 and 1995. [1]

Jones is married to Viola, a lecturer in Christianity and art, with whom he has three daughters: Sophie, Olivia and Isabel. [1] 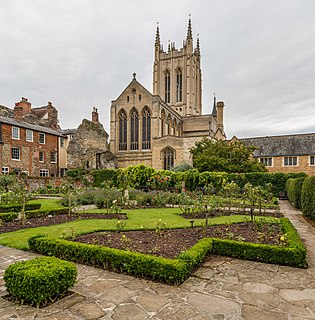 Graeme Paul Knowles is a retired Anglican bishop. He served latterly as the Acting Dean of St Edmundsbury, having previously served as Bishop of Sodor and Man and as Dean of St Paul's.

Gordon Keith Sinclair is a British Anglican retired bishop. From 2007 until 2021, he served as the Bishop of Birkenhead, one of two suffragan bishops in the Church of England Diocese of Chester.

Jonathan Hugh Frost is a British Anglican bishop. He has served as the Bishop of Portsmouth since 18 January 2022. He was previously Dean of York and Bishop of Southampton, a suffragan bishop in the Church of England's Diocese of Winchester since 2010.

Stephen John Waine is an Anglican priest. Since February 2015, he has been the Dean of Chichester. He had been the Archdeacon of Dorset from 2010 to 2015. 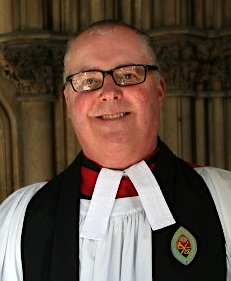 Paul Shackerley is an Anglican priest of the Church in Wales and is the current dean of Brecon.

Martin Alan Seeley is a British Church of England bishop. Since May 2015, he has been the Bishop of St Edmundsbury and Ipswich. From 2006 to 2015, he was the Principal of Westcott House, Cambridge.

Joseph Patricius Hawes is a British Anglican priest. Since 2018, he has been the Dean of St Edmundsbury. From 2003 to 2018, he was Vicar of All Saints Church, Fulham in the Diocese of London. His early parish ministry was spent in the Diocese of Southwark.

Jeanette Margaret Gosney is a British Anglican priest. Since 2020, she has served as Archdeacon of Suffolk in the Diocese of St Edmundsbury and Ipswich. She was previously a chaplain, theological college tutor, and in parish ministry.