Ralph of Lechlade was the Dean of Wells during 1217.

Peter of Chichester was the Dean of Wells during 1220.

William of Merton was the Dean of Wells during 1237.

William Burnell was the Dean of Wells during 1292.

Nicholas Slake was the Dean of Wells during 1398.

Samuel Creswicke was an Anglican priest.

George William Lukin was the Dean of Wells between 1799 and his death on 27 November 1812. 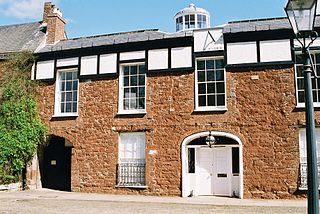 The Devon and Exeter Institution is a subscription library in the City of Exeter, Devon, founded in 1813 for "The general diffusion of science, literature and the arts". It is situated at 7, Cathedral Close, Exeter, in a building facing the north side of Exeter Cathedral which was formerly the Exeter townhouse of the Courtenay family of Powderham Castle.

Exeter Cathedral School (ECS) is a 3–13 mixed, Church of England, independent day and boarding choir and preparatory school in Exeter, Devon, England. It has been closely associated with Exeter Cathedral since it was first recorded as existing in the 12th century.