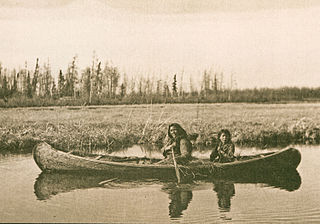 The Chipewyan are a Dene Indigenous Canadian peoples of the Athabaskan language family, whose ancestors are identified with the Taltheilei Shale archaeological tradition. They are part of the Northern Athabascan group of peoples, and come from what is now Western Canada. 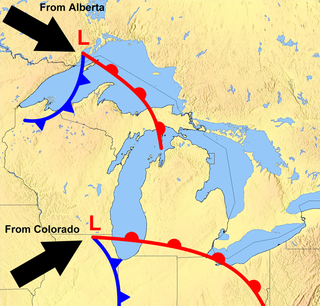 The Great Lakes Storm of 1913, historically referred to as the "Big Blow," the "Freshwater Fury," or the "White Hurricane," was a blizzard with hurricane-force winds that devastated the Great Lakes Basin in the Midwestern United States and Ontario, Canada from November 7 through November 10, 1913. The storm was most powerful on November 9, battering and overturning ships on four of the five Great Lakes, particularly Lake Huron. Deceptive lulls in the storm and the slow pace of weather reports contributed to the storm's destructiveness.

A snowdrift is a deposit of snow sculpted by wind into a mound during a snowstorm. Snowdrifts resemble sand dunes and are formed in a similar manner, namely, by wind moving light snow and depositing it when the wind has virtually stopped, usually against a stationary object. Snow normally crests and slopes off toward the surface on the windward side of a large object. On the leeward side, areas near the object are a bit lower than surrounding areas, but are generally flatter. 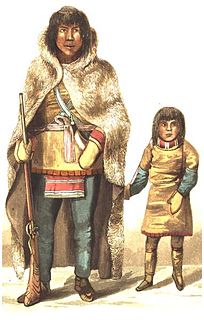 The Yellowknives, Yellow Knives, Copper Indians, Red Knives or T'atsaot'ine are indigenous peoples of Canada, one of the five main groups of the First Nations Dene who live in the Northwest Territories of Canada. The name, which is also the source for the later community of Yellowknife, derives from the colour of the tools made from copper deposits. 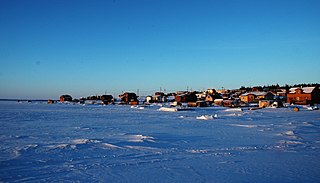 Łutselkʼe, also spelt Łutsel Kʼe, is a "designated authority" in the North Slave Region of the Northwest Territories, Canada. The community is located on the south shore near the eastern end of Great Slave Lake and until 1 July 1992, it was known as Snowdrift, as the community lies near the mouth of the Snowdrift River.

Blowing snow is snow lifted from the surface by the wind, at eye level or more, that will reduce visibility. Blowing snow can come from falling snow or snow that already accumulated on the ground but is picked up and blown about by strong winds. It is one of the classic requirements for a blizzard. Its METAR code is BLSN. If the snow remains below 1.8 m (6 ft), it will be called drifting snow. The snow which is being blown about may deposit as snowdrifts.

Lanarce is a commune in the Ardèche department in southern France.

Murphy Lakes may refer to:

Child of the Wolves is a children's novel, published in 1996, about a Siberian husky puppy that joins a wolf pack. It was written by Elizabeth Hall, wife of Island of the Blue Dolphins author, Scott O'Dell. 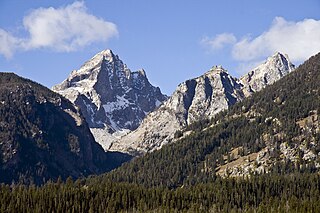 Avalanche Canyon is located in Grand Teton National Park, in the U. S. state of Wyoming. The canyon was formed by glaciers which retreated at the end of the last glacial maximum approximately 15,000 years ago, leaving behind a U-shaped valley. To the north of Avalanche Canyon lies South Teton, Cloudveil Dome and Nez Perce Peak while to the southwest lie Mount Wister and Veiled Peak. Snowdrift Lake and Lake Taminah are situated at the head of the canyon.

The Wall is located in the Teton Range in the U.S. state of Wyoming, running for more than 4 miles (6.4 km) along the western border of Grand Teton National Park. The peak is on the border of Grand Teton National Park and the Jedediah Smith Wilderness of Caribou-Targhee National Forest. This high point, near the northern terminus of the cliff, is 1 mile (1.6 km) WSW of South Teton and overlooks Snowdrift Lake.

Veiled Peak is located in the Teton Range, within Grand Teton National Park, U.S. state of Wyoming. Veiled Peak is west of Mount Wister and rises to the south above Snowdrift Lake.

Lake Taminah is located in Grand Teton National Park, in the U. S. state of Wyoming. This alpine lake is a .5 miles (0.80 km) northeast of Mount Wister and a little over a half mile south of Cloudveil Dome Lake Taminah lies within Avalanche Canyon and is .5 miles (0.80 km) east and almost 1,000 feet (300 m) lower in elevation than Snowdrift Lake. Lake Taminah is along a route often taken by climbers attempting to gain access to various mountain peaks, though the trails are not maintained. Near the outlet from Lake Taminah lies Shoshoko Falls, which later flows into Taggart Creek.

The Whaleback Snow-Survey Cabin, about 10 miles (16 km) north of Prospect in the Rogue River–Siskiyou National Forest in southwest Oregon, is a log cabin with a "snow tower" built in 1937. It is situated on the east slope of Whaleback Mountain. It was listed on the National Register of Historic Places in 2000.

Snowdrift is a 1923 American action film directed by Scott R. Dunlap and written by John Stone. It is based on the 1922 novel Snowdrift by James Hendryx. The film stars Buck Jones, Bert Sprotte, Gertrude Ryan, Colin Chase, Evelyn Selbie and Annette Jean. The film was released on April 22, 1923, by Fox Film Corporation.