Spicules are structural elements found in most sponges. They provide structural support and deter predators. Large spicules that are visible to the naked eye are referred to as megascleres, while smaller, microscopic ones are termed microscleres.

Spicules are found in a range of symmetry types.

Triaxons have three axes; in triods, each axis bears a similar ray; in pentacts, the triaxon has five rays, four of which lie in a single plane; and pinnules are pentacts with large spines on the non-planar ray. [1]

Tetraxons have four axes, and polyaxons more (description of types to be incorporated from [1] ). Sigma-C spicules have the shape of a C. [1]

Sponges can be calcareous, siliceous, or composed of spongin.

The meshing of many spicules serves as the sponge’s skeleton. It provides structural support and defense against predators.

The composition, size, and shape of spicules is one of the largest determining factors in sponge taxonomy.

Spicules are formed by sclerocytes, which are derived from archaeocytes. The sclerocyte begins with an organic filament, and adds silica to it. Spicules are generally elongated at a rate of 1-10 μm per hour. Once the spicule reaches a certain length it protrudes from the sclerocyte cell body, but remains within the cell’s membrane. On occasion, sclerocytes may begin a second spicule while the first is still in progress. [7]

Research on the Euplectella aspergillum (Venus' Flower Basket) demonstrated that the spicules of certain deep-sea sponges have similar traits to Optical fibre. In addition to being able to trap and transport light, these spicules have a number of advantages over commercial fibre optic wire. They are stronger, resist stress easier, and form their own support elements. Also, the low-temperature formation of the spicules, as compared to the high temperature stretching process of commercial fibre optics, allows for the addition of impurities which improve the refractive index. In addition, these spicules have built-in lenses in the ends which gather and focus light in dark conditions. It has been theorized that this ability may function as a light source for symbiotic algae (as with Rosella racovitzae) or as an attractor for shrimp which live inside the Venus' Flower Basket. However, a conclusive decision has not been reached; it may be that the light capabilities are simply a coincidental trait from a purely structural element. [7] [8] [9] Spicules funnel light deep inside sea sponges. [10] [11] 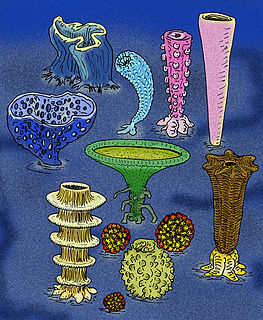 Archaeocyatha is a taxon of extinct, sessile, reef-building marine organisms of warm tropical and subtropical waters that lived during the early (lower) Cambrian Period. It is believed that the centre of the Archaeocyatha origin are now located in East Siberia, where they are first known from the beginning of the Tommotian Age of the Cambrian, 525 million years ago (mya). In other regions of the world, they appeared much later, during the Atdabanian, and quickly diversified into over a hundred families. They became the planet's very first reef-building animals and are an index fossil for the Lower Cambrian worldwide.

Sponges, the members of the phylum Porifera, are a basal Metazoa (animal) clade as a sister of the Diploblasts. They are multicellular organisms that have bodies full of pores and channels allowing water to circulate through them, consisting of jelly-like mesohyl sandwiched between two thin layers of cells. The branch of zoology that studies sponges is known as spongiology.

The centrohelids or centroheliozoa are a large group of heliozoan protists. They include both mobile and sessile forms, found in freshwater and marine environments, especially at some depth. 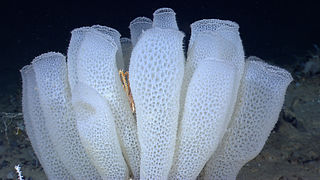 The Venus' flower basket is a hexactinellid sponge in the phylum Porifera inhabiting the deep ocean. It is a marine sponge found in deep waters in pacific oceans near West Indies and Philippines islands. The body is tubular, curved and basket-like and made up of triaxon spicules. The body is perforated by numerous apertures, which are not true ostia but simply parietal gaps. Syconoid type of canal system is present, where ostia communicate with incurrent canals, which communicates with radial canals through prosopyles which, in turn, open in to spongocoel and to outside through osculum. 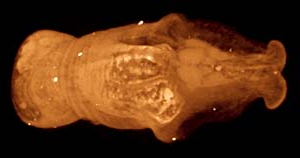 Aplacophora is a monophyletic group of small, deep-water, exclusively benthic, marine molluscs found in all oceans of the world. All known modern forms are shell-less: only some extinct primitive forms possessed valves. The group comprises the two clades Solenogastres (Neomeniomorpha) and Caudofoveata (Chaetodermomorpha), which between them contain 28 families and about 320 species. The aplacophorans are traditionally considered ancestral to the other mollusc classes. However, the relationship between the two aplacophoran groups and to the other molluscan classes and to each other is as yet unclear. 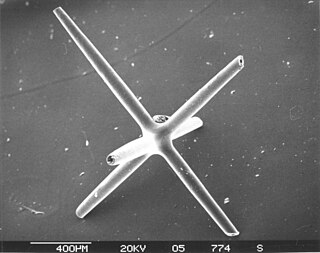 The siliceous sponges form a major group of the phylum Porifera, consisting of classes Demospongiae and Hexactinellida. They are characterized by spicules made out of silicon dioxide, unlike calcareous sponges. 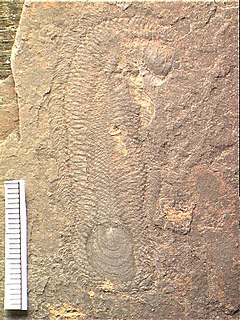 The halkieriids are a group of fossil organisms from the Lower to Middle Cambrian. Their eponymous genus is Halkieria, which has been found on almost every continent in Lower to Mid Cambrian deposits, forming a large component of the small shelly fossil assemblages. The best known species is Halkieria evangelista, from the North Greenland Sirius Passet Lagerstätte, in which complete specimens were collected on an expedition in 1989. The fossils were described by Simon Conway Morris and John Peel in a short paper in 1990 in the journal Nature. Later a more thorough description was undertaken in 1995 in the journal Philosophical Transactions of the Royal Society of London and wider evolutionary implications were posed.

The Chancelloriids are an extinct family of animal common in sediments from the Early Cambrian to the early Late Cambrian. Many of these fossils consists only of spines and other fragments, and it is not certain that they belong to the same type of organism. Other specimens appear to be more complete and to represent sessile, bag-like organisms with a soft skin armored with star-shaped calcareous sclerites from which radiate sharp spines.

Anheteromeyenia argyrosperma is a freshwater sponge found across North America. 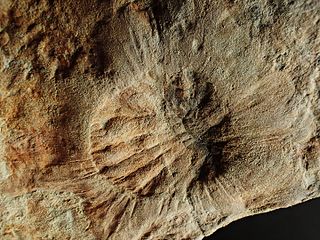 Palaeophragmodictya is an extinct genus of sponge-grade organisms from the Ediacaran Period. Originally interpreted as a hexactinellid sponge, the organism also bears some coelomate characteristics, including bilateral symmetry.

The small shelly fauna, small shelly fossils (SSF), or early skeletal fossils (ESF) are mineralized fossils, many only a few millimetres long, with a nearly continuous record from the latest stages of the Ediacaran to the end of the Early Cambrian Period. They are very diverse, and there is no formal definition of "small shelly fauna" or "small shelly fossils". Almost all are from earlier rocks than more familiar fossils such as trilobites. Since most SSFs were preserved by being covered quickly with phosphate and this method of preservation is mainly limited to the Late Ediacaran and Early Cambrian periods, the animals that made them may actually have arisen earlier and persisted after this time span. 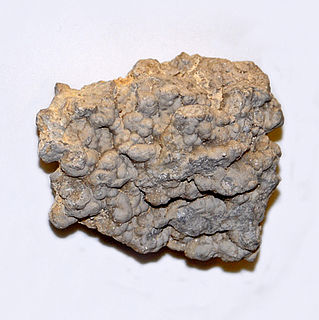 The extinct Solenoporaceae have traditionally been interpreted as a group of red algae ancestral to the Corallinales.

Borojevia paracerebrum is a species of calcareous sponge from Mexico. The species is named after its similarity to Borojevia cerebrum.

A trab is structural element within a sponge formed by the fusion of dendroclones. 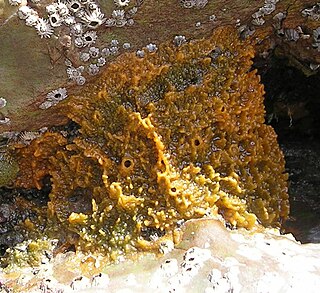 In living creatures, structural coloration is the production of colour by microscopically structured surfaces fine enough to interfere with visible light, sometimes in combination with pigments. For example, peacock tail feathers are pigmented brown, but their microscopic structure makes them also reflect blue, turquoise, and green light, and they are often iridescent.

Homaxinella balfourensis is a species of sea sponge in the family Suberitidae. It is found in the seas around Antarctica and can grow in two forms, either branching out in one plane like a fan or forming an upright club-like structure.

Until the late 1950s, the Precambrian era was not believed to have hosted multicellular organisms. However, with radiometric dating techniques, it has been found that fossils initially found in the Ediacara Hills in Southern Australia date back to the late Precambrian era. These fossils are body impressions of organisms shaped like disks, fronds and some with ribbon patterns that were most likely tentacles.

Agelas dispar is a species of demosponge in the family Agelasidae. It lives on shallow-water reefs in the Caribbean Sea and around the West Indies.