TV4 Norge was a Norwegian television channel owned by TV4 AB. TV4 Norge started in 1990 and was shut down in 1992 because it didn't make enough money. It was broadcast from the Intelsat VA F-12 satellite on 1 degree west. [1] {dead link} 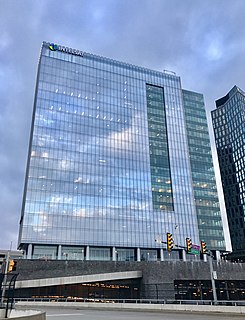 NTV may refer to:

Modern Times Group (MTG) is a digital entertainment company based in Stockholm, Sweden. MTG was formed out of the media holdings of investment company Kinnevik, which in 1997 was distributed to the company stockholders. MTG operates Zoomin.TV, as well as eSports businesses, ESL and Dreamhack.

Viasat is a Nordic direct broadcast satellite television broadcaster and pay TV operator, owned by the Swedish media group Nordic Entertainment Group in Nordics, All Media Baltics in Baltics and some channels owned by Viasat World. Broadcasting from London, the target markets are in the Nordic and the Baltic Countries.

Television in Pakistan started in 1964, and the first live transmission of Pakistan Television began on November 26, 1964, in Lahore.

Türksat Satellite Communications and Cable TV Operations Company is the sole communications satellite operator in Turkey. It was established on 21 December 1990 as a state-owned company named Türksat Milli Haberleşme Uyduları in Gölbaşı, Ankara Province; eventually incorporating the satellite services of Türk Telekomünikasyon A.Ş. and becoming Türksat A.Ş. on 22 July 2004. Türksat A.Ş. also owns 100% of the shares of Eurasiasat S.A.M., jointly established as a spin-off company with Aérospatiale in 1996 to manufacture and launch Turksat 2A in 2001.

ES TV is a Norwegian Christian Pentecostal TV station. ES TV broadcasts from a grid of ground transmitters, via satellite and also as Web TV. The station began its mission in 1993. the foundation Pinsevennenes Evangeliesenter owns the broadcaster.

DirecTV is an American direct broadcast satellite service provider based in El Segundo, California and is a subsidiary of AT&T. Its satellite service, launched on June 17, 1994, transmits digital satellite television and audio to households in the United States, Latin America, Americas and the Caribbean. Its primary competitors are Dish Network and cable television providers. On July 24, 2015, after receiving approval from the United States Federal Communications Commission and United States Department of Justice, AT&T acquired DirecTV in a transaction valued at $67.1 billion.

Visjon Norge is a Norwegian Christian television station, which was launched in 2003 as the first Scandinavian Christian television channel to air 24 hours a day. It can be reached throughout Scandinavia by satellite. The founder and executive editor of the channel is Jan Hanvold. A sister channel based in Sweden, TV Vision Norden was launched in 2015.

Television in Saudi Arabia was introduced in 1964, however, dominated by just five major companies: Dubai TV, Middle East Broadcasting Center,SM Enterprise TV, Lebanese Broadcasting Corporation, Rotana and Saudi TV. Together, they control 80% of the pan-Arabee ENJ broadcasting market. Though private television stations cannot operate from Saudi soil, the country is a major market for pan-Arab satellite and pay-TV. Saudi investors are behind the major networks MBC, which is based in Dubai, and Emirates based OSN. Although satellite dishes have been officially banned since 1990, Saudi Arabia has the second highest satellite TV penetration in the Arab Region, at 97%, and there are 85 free-to-air satellite channels headquartered in Saudi Arabia.

Television in Egypt is mainly received through free satellite, while analog terrestrial represents 41% of total viewers. Egyptians spend a significant amount of time watching television, with 40% of people watching up to 4 hours of television per day.