Thoracosaurus is an extinct genus of eusuchian crocodylomorph which existed during the Late Cretaceous and Early Paleocene in North America and Europe. The animal had traditionally been thought to be related to the modern false gharial, largely because the nasal bones contact the premaxillae. Phylogenetic work starting in the 1990s instead supported affinities within Gavialoidea exclusive of such forms, [2] although a 2018 tip dating study simultaneously using morphological, molecular (DNA sequencing), and stratigraphic (fossil age) data suggests that it might have been a non-crocodylian eusuchian. [3] The genus contains the type species Thoracosaurus neocesariensis in North America, [4] and what is either Thoracosaurus isorhynchus or Thoracosaurus macrorhynchus from Europe; a recent review [5] argues that T. macrorhynchus is a junior synonym of T. isorhynchus, but it is unclear whether the type of T. isorhynchus allows differentiation of European and North American Thoracosaurus; if not, then T. isorhynchus would be a nomen dubium . A number of species have been referred to this genus, but most are dubious. [2] 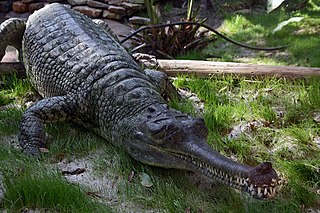 Gavialidae is a family of large semiaquatic crocodilians with elongated, narrow snouts. Gavialidae consists of two living species, the gharial and the false gharial, both occurring in Asia. Many extinct members are known from a broader range, including the recently extinct Hanyusuchus. Gavialids are generally regarded as lacking the jaw strength to capture the large mammalian prey favoured by crocodiles and alligators of similar size so their thin snout is best used to catch fish, however the false gharial has been found to have a generalist diet with mature adults preying upon larger vertebrates.

Boverisuchus is an extinct genus of planocraniid crocodyliforms known from the middle Eocene of Germany and western North America. It grew to approximately 3 m (9.8 ft) in length. 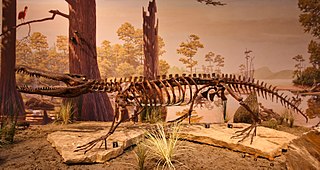 Gavialosuchus is an extinct genus of gavialid crocodylian from the early Miocene of Europe. Currently only one species is recognized, as a few other species of Gavialosuchus have since been reclassified to other genera.

Leidyosuchus is an extinct genus of alligatoroid from the Late Cretaceous of Alberta. It was named in 1907 by Lawrence Lambe, and the type species is L. canadensis. It is known from a number of specimens from the middle Campanian age Dinosaur Park Formation. It was a medium-sized alligatorid, with a maximum skull length greater than 40 centimeters (16 in).

Argochampsa is an extinct genus of eusuchian crocodylomorph, usually regarded as a gavialoid crocodilian, related to modern gharials. It lived in the Paleocene of Morocco. Described by Hua and Jouve in 2004, the type species is A. krebsi, with the species named for Bernard Krebs. Argochampsa had a long narrow snout, and appears to have been marine in habits.

Eusuchia is a clade of crocodylomorphs that first appeared in the Early Cretaceous with Hylaeochampsa. Along with Dyrosauridae and Sebecosuchia, they were the only crocodyliformes who survived the K-T extinction. Since the other two clades died out 47 and 11 million years ago respectively, all living crocodilian species are eusuchians, as are many extinct forms. 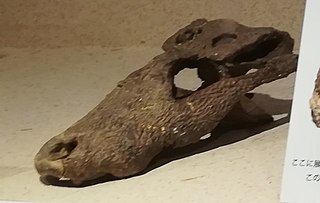 Navajosuchus is an extinct genus of alligatorine crocodylian. Its fossils have been found in the Paleocene-age Nacimiento Formation of the San Juan Basin, New Mexico. It was named in 1942 by Charles C. Mook, and the original type species was N. novomexicanus. N. novomexicanus was based on AMNH 5186, a partial skull collected in 1913. Later research showed that Navajosuchus novomexicanus was the same as the earlier-named Allognathosuchus mooki. However, A. mooki does not belong to the genus Allognathosuchus, and so the name of the crocodilian becomes Navajosuchus mooki. Under whichever name is used, this animal would have been a generalized predator of the Nacimiento floodplains. It was the most common Nacimiento Formation crocodilian, found in both the Puercan and Torrejonian faunal assemblages.

Brachychampsa is an extinct genus of alligatoroid, possibly a basal caiman. Specimens have been reported from New Mexico, Colorado, Wyoming, Montana, North and South Dakota, New Jersey, and Saskatchewan, though only those from Montana, Utah, and New Mexico are based on material sufficient to justify the referral. One specimen has been reported from the Darbasa Formation of Kazakhstan, although the species status is indeterminate for the fossil. The genus first appeared during the late Campanian stage of the Late Cretaceous and became extinct during the late Maastrichtian stage of the Cretaceous. Brachychampsa is distinguished by an enlarged fifth maxillary tooth in the upper jaw.

Eothoracosaurus is an extinct monospecific genus of eusuchian crocodylomorphs found in Eastern United States which existed during the Late Cretaceous period. Eothoracosaurus is considered to belong to an informally named clade called the "thoracosaurs", named after the closely related Thoracosaurus. Thoracosaurs in general were traditionally thought to be related to the modern false gharial, largely because the nasal bones contact the premaxillae, but phylogenetic work starting in the 1990s instead supported affinities within gavialoid exclusive of such forms. Even more recent phylogenetic studies suggest that thoracosaurs might instead be non-crocodilian eusuchians. 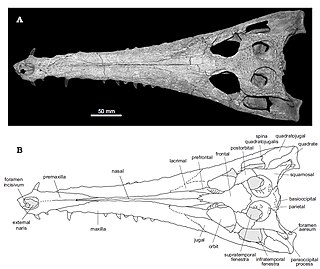 Eosuchus is an extinct genus of eusuchian crocodylomorph, traditionally regarded as a gavialoid crocodilian. It might have been among the most basal of all gavialoids, lying crownward of all other known members of the superfamily, including earlier putative members such as Thoracosaurus and Eothoracosaurus. Fossils have been found from France as well as eastern North America in Maryland, Virginia, and New Jersey. The strata from which specimens have been found date back to the late Paleocene and early Eocene epochs.

Hylaeochampsa is an extinct genus of eusuchian crocodylomorphs. It is known only from a partial skull recovered from Barremian-age rocks of the Lower Cretaceous Vectis Formation of the Isle of Wight. This skull, BMNH R 177, is short and wide, with a eusuchian-like palate and inferred enlarged posterior teeth that would have been suitable for crushing. Hylaochampsa was described by Richard Owen in 1874, with H. vectiana as the type species. It may be the same genus as the slightly older Heterosuchus, inferred to have been of similar evolutionary grade, but there is no overlapping material as Heterosuchus is known only from vertebrae. If the two could be shown to be synonyms, Hylaeochampsa would have priority because it is the older name. Hylaeochampsa is the type genus of the family Hylaeochampsidae, which also includes Iharkutosuchus from the Late Cretaceous of Hungary. James Clark and Mark Norell positioned it as the sister group to Crocodylia. Hylaeochampsa is currently the oldest known unambiguous eusuchian.

Kentisuchus is an extinct genus of gavialoid crocodylian, traditionally regarded as a member of the subfamily Tomistominae. Fossils have been found from England and France that date back to the early Eocene. The genus has also been recorded from Ukraine, but it unclear whether specimens from Ukraine are referable to Kentisuchus.

Planocrania is an extinct genus of eusuchian crocodyliforms from what is now China. Two species are currently known to belong to the genus.

Prodiplocynodon is an extinct genus of basal crocodyloid crocodylian. It is one of the only crocodyloids known from the Cretaceous and existed during the Maastrichtian stage. The only species of Prodiplocynodon is the type species P. langi from the Lance Formation of Wyoming, known only from a single holotype skull lacking the lower jaw. 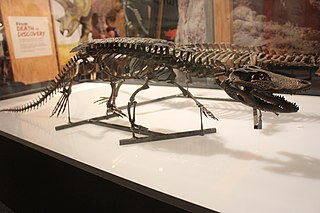 Stangerochampsa is an extinct genus of globidontan alligatoroid, possibly an alligatorine or a stem-caiman, from the Late Cretaceous of Alberta. It is based on RTMP.86.61.1, a skull, partial lower jaws, and partial postcranial skeleton discovered in the late Campanian–early Maastrichtian-age Horseshoe Canyon Formation. Stangerochampsa was described in 1996 by Wu and colleagues. The type species is S. mccabei. The generic name honors the Stanger family, the owners of the ranch where the specimen was found, and the species name honors James Ross McCabe, who discovered, collected, and prepared it. Stangerochampsa is described as "small to medium–sized"; the type skull is 20.03 centimetres (7.89 in) long from the tip of the snout to the occipital condyle, and is 13.0 centimetres (5.1 in) wide at its greatest, while the thigh bone is 14.2 centimetres (5.6 in) long. It had heterodont dentition, with large crushing teeth at the rear of the jaws.

Thecachampsa is an extinct genus of gavialoid crocodylian, traditionally regarded as a member of the subfamily Tomistominae. Fossils have been found from the eastern United States in deposits of Miocene age. Those named in the 19th century were distinguished primarily by the shape of their teeth, and have since been combined with T. antiquus. More recently erected species were reassigned from other genera, although their assignment to Thecachampsa has since been questioned.

Planocraniidae is an extinct family of eusuchian crocodyliforms known from the Paleogene of Asia, Europe and North America. The family was coined by Li in 1976, and contains three genera, Boverisuchus, Duerosuchus and Planocrania. Planocraniids were highly specialized crocodyliforms that were adapted to living on land. They had extensive body armor, long legs, and blunt claws resembling hooves, and are sometimes informally called "hoofed crocodiles". 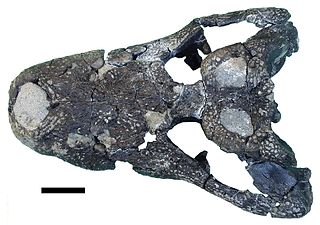 Allodaposuchidae is an extinct clade of eusuchians that lived in Europe during the Late Cretaceous (Santonian-Maastrichtian).

Portugalosuchus is an extinct genus of eusuchian crocodyliform that was possibly a basal crocodylian – if so then it would be the oldest known crocodylian to date. The type species is P. azenhae, described in 2018, and it is known from the Late Cretaceous (Cenomanian)-aged Tentugal Formation in Portugal. A 2021 morphological study recovered Portugalosuchus within Crocodylia as a member of Gavialidae closely related to similar "thoracosaurs", while also noting that is might also possibly be outside of Crocodylia completely. A 2022 tip dating analysis incorporating both morphological and DNA data placed Portugalosuchus outside of Crocodylia, as the sister taxon of the family Allodaposuchidae. A cladogram simplified after that analysis is shown below: