Thornton Ward Estate is a historic rural estate located at 1387 U.S. Route 40 south-southeast of Toledo, Illinois. The main building on the estate, an Italianate house, was constructed circa 1875 by the Ward family. The two-story brick home has a symmetrical front with two windows on each story on either side of the entry. The entrance features a double door topped by an arched transom; a single panel door is located directly above the entrance on the second floor. The home's hipped roof features a small gable above the entrance and is topped by a widow's walk. The estate also includes a section of the original National Road. [2]

The estate was added to the National Register of Historic Places on December 4, 2001. [1] 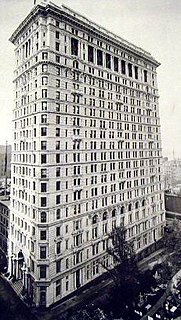 The Empire Building is an office skyscraper at 71 Broadway, on the corner of Rector Street, in the Financial District of Manhattan in New York City. It was designed by Kimball & Thompson in the Classical Revival style and built by Marc Eidlitz & Son from 1897 to 1898. The building consists of 21 stories above a full basement story facing Trinity Place at the back of the building and is 293 feet (89 m) tall.

Dunmere is a historic estate at 560 Ocean Road in Narragansett, Rhode Island.

The Thornton W. Burgess House is a historic house at 789 Main Street in Hampden, Massachusetts. Built between 1780 and 1784, it is a well-preserved vernacular house built by one of the area's early settlers, and was for many years home to children's author Thornton Burgess. The property is now owned by the Massachusetts Audubon Society, which uses it for staff housing. It is adjacent to the Society's Laughing Brook Wildlife Sanctuary. It was listed on the National Register of Historic Places in 1983. 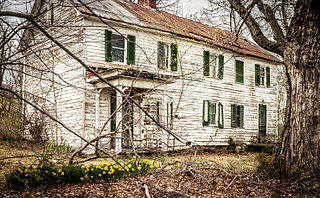 The Willa Cather Birthplace, also known as the Rachel E. Boak House, is the site near Gore, Virginia, where the Pulitzer Prize-winning author Willa Cather was born in 1873. The log home was built in the early 19th century by her great-grandfather and has been enlarged twice. The building was previously the home of Rachel E. Boak, Cather's grandmother. Cather and her parents lived in the house only about a year before they moved to another home in Frederick County. The farmhouse was listed on the Virginia Landmarks Register (VLR) in 1976 and the National Register of Historic Places (NRHP) in 1978.

Brook Farm is a historic country estate farm at 4203 Twenty Mile Stream Road in Cavendish, Vermont. It includes one of the state's grandest Colonial Revival mansion houses, and surviving outbuildings of a model farm of the turn of the 20th century. It was listed on the National Register of Historic Places in 1993. The property is now home to the Brook Farm Vineyard. 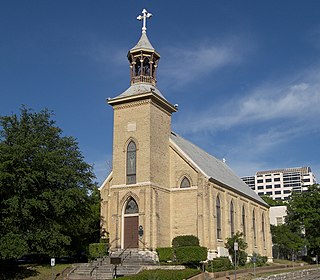 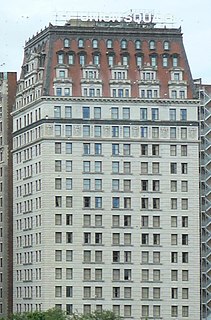 The W New York Union Square is a 270-room, 21-story boutique hotel operated by W Hotels at the northeast corner of Park Avenue South and 17th Street, across from Union Square in Manhattan, New York. Originally known as the Germania Life Insurance Company Building, it was designed by Albert D'Oench and Joseph W. Yost and built in 1911 in the Beaux-Arts style.

Highland Cottage, also known as Squire House, is located on South Highland Avenue in Ossining, New York, United States. It was the first concrete house in Westchester County, built in the 1870s in the Gothic Revival architectural style. In 1982 it was listed on the National Register of Historic Places; almost 30 years later, it was added to the nearby Downtown Ossining Historic District as a contributing property. 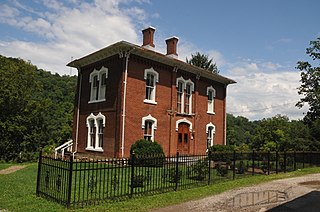 The Lathrop Russell Charter House is a historic home located at West Union, Doddridge County, West Virginia, U.S.A. It was built in 1877, and is a two-story, T-shaped frame dwelling, with a low-pitched hipped roof with bracketed eaves. It features tall crowned windows and a two-story side porch. Also on the property is a contributing guest house.

The Cathedral of St. John the Evangelist, also known simply as St. John's Cathedral, is a Catholic cathedral and parish church located in Boise, Idaho, United States. It is the seat of the Diocese of Boise. The church building was individually listed on the National Register of Historic Places in 1978. It was included as a contributing property of the St. John's Cathedral Block when the rest of the parish buildings on Block 90 were added to the National Register in 1982. That same year, the parish buildings were included as a contributing property in the Fort Street Historic District.

The Malad Second Ward Tabernacle is a tabernacle and meetinghouse of The Church of Jesus Christ of Latter-day Saints located in Malad City, Idaho. It is significant for its large scale and unorthodox adaptation of architectural styles, as well as its historical importance to Oneida County, which once was among the most populated counties in Idaho. It is, along with six other buildings in Oneida County, listed on the National Register of Historic Places.

The Lexington, also known as Lexington Apartments, is a historic building located in Des Moines, Iowa, United States. The five-story brick structure on a raised basement was completed in 1908 as the city's first high-rise apartment building. It was designed and built by local architect-builder Fred Weitz. The exterior features a Colonial Revival style entrance with a recessed door, arched fanlight, and engaged Doric style columns that support the pediment. Wrought iron balconies are located on the two floors above the entrance. On the interior there are two apartments on every floor, and they originally featured servant's quarters. They have subsequently been converted into other purposes. The upper floors are served by a large, open-cage brass elevator. The building purportedly had paranormal activity involving its elevator. It was renovated between 2012 and 2014. It was individually listed on the National Register of Historic Places in 1976. The building was included as a contributing property in the Sherman Hill Historic District in 1979. It is currently owned by the Allen Family Trust.

Fall Hill is a plantation located near the falls on the Rappahannock River in Fredericksburg, Virginia. Though the Thornton family has lived at Fall Hill since the early 18th century, the present house was built in 1790 for Francis Thornton V (1760–1836). The land on which Fall Hill is located is part of an 8,000 acres (3,200 ha) land patent obtained by Francis Thornton I (1657–1727) around 1720. The present-day town of Fredericksburg, Virginia is located on that original patent.

The Lincoln Branch Library is a former Carnegie library building in the Lincoln Park neighborhood of Duluth, Minnesota, United States. It was constructed from 1915 to 1917 as the first permanent home of a Duluth Public Library branch first established in 1892. The Lincoln Branch Library was built of brick and limestone in the Late Gothic Revival style. It was the last of the three Carnegie libraries built in Duluth. 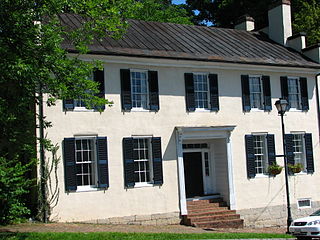 Dr. William H. Pitts House is a historic home located at Abingdon, Washington County, Virginia. It was built in 1854, and is a two-story, five-bay, stuccoed masonry, Greek Revival style dwelling. The house sits on a limestone foundation and has a gable roof with stepped-gable parapet walls flanking paired chimneys on each end. It has a recessed entrance which features a double-leaf wood entrance door surrounded by a transom and sidelights. 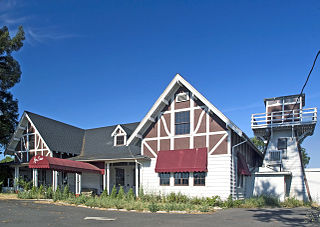 The Conro Fiero House, also known as Woodlawn Acres and latterly as the Mon Desir restaurant, was a revival-style Tudor mansion built in 1910 by Conro Fiero. Originally listed on the National Register of Historic Places on December 9, 1981, it was delisted on June 1, 2011, following its destruction by fire.

The McFarland House is a historic house located at 895 7th St. in Charleston, Illinois. Architect Charles D. Mitchell designed the Queen Anne house, which was built from 1890 to 1892. The front of the house features a wraparound porch decorated with elliptical bracketing, pendants along the roof line, and partially turned columns. A small second-story porch above the entrance has the same design. A gable at the entrance has a sunburst design; the large gable at the top of the house has a matching sunburst. The attic windows, which are located in the large gable, have a pent roof and are surrounded by decorative woodwork. Queen Anne features inside the house include a stained glass bay window in the parlor, a fireplace decorated with ceramic tiles, decorative spindlework, and wooden door and window surrounds.