South Oxfordshire is a local government district in the ceremonial county of Oxfordshire, England. Its council is based in Milton Park, Milton. The areas located south of the River Thames are within the historic county of Berkshire. 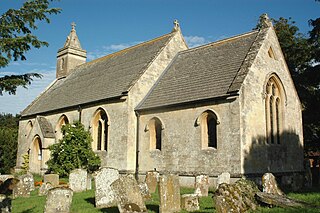 Albury is a village in the civil parish of Tiddington-with-Albury, about 5 miles (8 km) west of Thame in Oxfordshire. 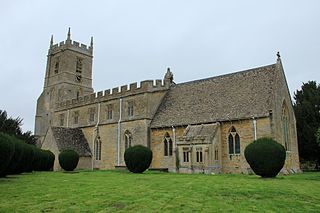 Long Compton is a village and civil parish in Warwickshire, England near the extreme southern tip of Warwickshire, and close to the border with Oxfordshire. It is part of the district of Stratford-on-Avon and in the 2001 census had a population of 705, increasing to 764 at the 2011 Census. 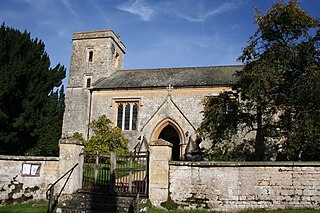 Waterstock is a village and civil parish on the River Thame about 4.5 miles (7 km) west of the market town of Thame in Oxfordshire. The parish is bounded to the north and west by the river, to the south largely by the A418 main road, and to the east largely by the minor road between Tiddington and Ickford Bridge across the Thame. On the north side of the parish, the river forms the county boundary with Buckinghamshire as well as the parish boundary with Ickford and Worminghall.

Cumnor Hill is a hill in the civil parish of Cumnor, to the west of the city of Oxford in the English county of Oxfordshire. In 1974 it was transferred from Berkshire. It is also the name of the ribbon development between the original Cumnor village and Botley outside the ring road on the outskirts of Oxford.

The River Ray is a river in Buckinghamshire and Oxfordshire, England. It rises at Quainton Hill and flows west through a flat countryside for around 25 km or 15 miles. It passes the village of Ambrosden and then flows through Otmoor. It joins the River Cherwell near Islip.

Claydon with Clattercot is a civil parish in Oxfordshire, England. It was formed in 1932 by merger of the parish of Claydon with the extra-parochial area of Clattercote. As at the United Kingdom Census 2011 its population was 306 and it had a total of 6.22km² of land, water and roads.

Hampton Gay and Poyle is a civil parish in Oxfordshire, England. It was formed in 1932 by merger of the parishes of Hampton Gay and Hampton Poyle and as at 2011 had 141 residents across 6.11 km²

Hardwick with Tusmore is a civil parish in Oxfordshire, England. It was formed in 1932 by merger of the parishes of Hardwick and Tusmore.

Newton Purcell with Shelswell is a civil parish in Oxfordshire, England. It was formed in 1932 by merger of the parishes of Newton Purcell and Shelswell.

Pishill with Stonor is a civil parish in the high Chilterns, South Oxfordshire. It includes the villages of Pishill and Stonor, and the hamlets of Maidensgrove and Russell's Water. Pishill with Stonor was formed by the merger of the separate civil parishes of Pishill and Stonor in 1922. In 2011 it had a human population of 304 across its 10.54km².

Waterperry with Thomley is a civil parish in South Oxfordshire. It includes the village of Waterperry and the abandoned former village of Thomley. Thomley and Wateperry were separate civil parishes in 1957. The current single civil parish was formed at some time thereafter, comprising 13.76km², having a population of 257 recorded in the United Kingdom Census 2011. The area is bisected by the M40 motorway, it is in the valley of the Thame and centred approximately 7 miles (11 km) east of the city of Oxford.

Cornbury and Wychwood is a civil parish in West Oxfordshire. It includes the country estate of Cornbury Park and the ancient former Royal Forest of Wychwood, which covers several square miles between Cornbury Park, the village of Leafield and the hamlet of Mount Skippett.

Shelswell is a hamlet in Oxfordshire about 4 miles (6.4 km) south of Brackley in neighbouring Northamptonshire. 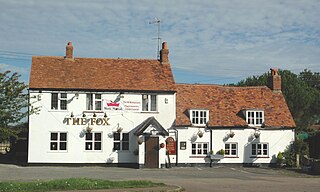