Last updated May 03, 2022
For people with the surname Tidmarsh, see Tidmarsh (surname).
Village in England

Tidmarsh is a village in West Berkshire, England. Its development is mainly residential and agricultural, and is centred on the A340 road between Pangbourne and Theale. The rural area is bounded by the M4 motorway to the south. It is centred 1.5 miles (2.4 km) south of Pangbourne, 5.5 miles (8.9 km) west of Reading and 40 miles (64 km) west of London.

Its civil parish council is, unusually in this district, shared with another village and is called Tidmarsh with Sulham. Further east, Sulham Woods separate the villages from Tilehurst, a western suburb of Reading. Its elevation ranges between 42 m (138 ft) in the north-east, and 85 m (279 ft) AOD in the western projection. The vast majority of the parish (more than 90%) is at more than 5 m (16 ft) above the River Pang. Much of the main street is between 1–10 m (3 ft 3 in – 32 ft 10 in) above the river level.

Woodland covers less than a tenth of its total area but about a quarter of the western or south-western higher ground. The Pang flows north through the village and then through the Moor Copse Nature Reserve on its way to join the River Thames at Pangbourne. In December 2006 the reserve was doubled in size, to about 57 hectares (140 acres). [2] The Tidmarsh and Sulham circular walk, about 4.0 km (2.5 mi) long, passes through the reserve and both villages.

The Tidmarsh section of the A340 is thought to follow the Roman road from the Roman town of Calleva Atrebatum in Silchester (about 7 mi or 11 km south), either to Dorchester-on-Thames (about 10 mi or 16 km north) [3] or a river-crossing at Pangbourne.[ citation needed ] If so, however, the southern portion has been straightened in later years. [3] The earliest mention of Tidmarsh was in 1196. [3] In 1239 there was a land-ownership dispute concerning the manor. There are records of a water corn-mill and a fishery in Tidmarsh in 1305. [4] The 18th century successor to the mill is now Grade II listed and converted to domestic accomodation. [5] There are multiple World War II pillboxes surrounding Tidmarsh, which made up part of the GHQ Line. [6]

The most conspicuous listed building in Tidmarsh is the 13th century half-timbered Greyhound Pub, [7] [8] which suffered a serious fire in 2005. [9] Another historic building is the Grade I listed, 12th century church, which is dedicated to St Laurence. [3] The church is particularly notable for its Norman south doorway, "very rare 13th century polygonal apse" [3] and 13th century lancet windows. The church was restored and modified in the 19th century. [10] The old rectory dates from 1856. Another notable building is the Grade II listed Round House. [11]

These include author Lytton Strachey (1880-1932) and the painter Dora Carrington (1893-1932). [3] Carrington painted the Greyhound Pub sign in the village. Rex Partridge, renamed Ralph by the Bloomsbury set, [12] also settled at Tidmarsh and formed a very 'Bloomsbury' trio with Lytton and Dora. [3] 21st century development in Tidmarsh has included housing at the north end of the village, Strachey Close. 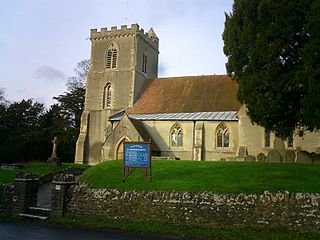 Harwell is a village and civil parish in the Vale of White Horse about 2 miles (3 km) west of Didcot, 6 miles (10 km) east of Wantage and 13 miles (21 km) south of Oxford. The parish measures about 3.5 miles (6 km) north – south, and almost 2 miles (3 km) east – west at its widest point. In 1923 its area was 2,521 acres (1,020 ha). Historically in Berkshire, it has been administered as part of Oxfordshire, England, since the 1974 boundary changes. The parish includes part of the Milton Park business park in the north and part of Harwell Science and Innovation Campus in the southwest. In the east it includes part of the new Great Western Park housing estate that is contiguous with the built-up area of Didcot. The 2011 Census recorded the parish's population as 2,349.

Earley is a town and civil parish in the Borough of Wokingham, Berkshire, England. Along with the neighbouring town of Woodley. The Office for National Statistics places Earley within the Reading/Wokingham Urban Area; for the purposes of local government it falls within the Borough of Wokingham, outside the area of Reading Borough Council. The name is sometimes spelt Erleigh or Erlegh. The town consists of a number of smaller areas, including Maiden Erlegh and Lower Earley, and lies some 3 miles (5 km) south and east of the centre of Reading, and some 4 miles (6 km) northwest of Wokingham. It has a population of around 32,000. In 2014, the RG6 postcode area was rated one of the most desirable postcode areas to live in England. The main campus of the University of Reading, Whiteknights Park, lies partly in Earley and partly in the borough of Reading.

Dora de Houghton Carrington, known generally as Carrington, was an English painter and decorative artist, remembered in part for her association with members of the Bloomsbury Group, especially the writer Lytton Strachey. From her time as an art student, she was known simply by her surname as she considered Dora to be "vulgar and sentimental". She was not well known as a painter during her lifetime, as she rarely exhibited and did not sign her work. She worked for a while at the Omega Workshops, and for the Hogarth Press, designing woodcuts.

The River Pang is a small chalk stream river in the west of the English county of Berkshire, and a tributary of the River Thames. It runs for approximately 23 kilometres (14 mi) from its source near the village of Compton to its confluence with the Thames in the village of Pangbourne. 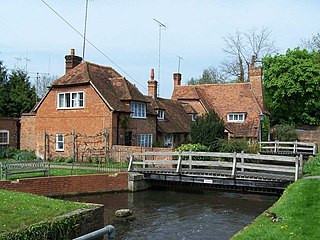 Bradfield is a village and civil parish in Berkshire, England. Aside from farms and a smaller amount of woodland its main settlements are Bradfield Southend, its medieval-founded nucleus and the hamlet of Tutts Clump. Bradfield village is the home of the public school Bradfield College. 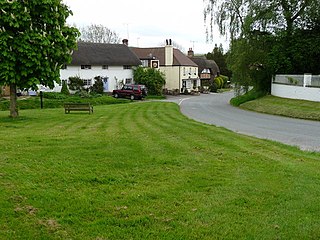 Ham is a small village and civil parish in Wiltshire, England. The parish borders the county of Berkshire, and the village lies about 3+1⁄4 miles (5.2 km) south of the Berkshire town of Hungerford.

Theale is a large village and civil parish in West Berkshire, England, 5 miles (8 km) southwest of Reading and 10 miles (16 km) east of Thatcham. The compact parish is bounded to the south and south-east by the Kennet & Avon Canal, to the north by a golf course, to the east by the M4 motorway and to the west by the A340 road. The village's history is a good example of how different modes of transport have achieved dominance in England over the last three centuries, from road to canal to railway and back to road again.

Pangbourne is a large village and civil parish on the River Thames in the English county of Berkshire. Pangbourne has its own shops, schools, a railway station on the Great Western main line and a village hill. Outside its grouped developed area is an independent school, Pangbourne College. 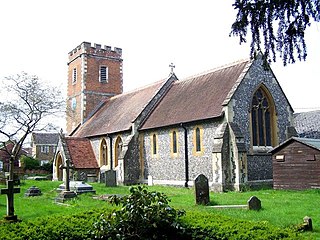 Purley on Thames is a village and civil parish in Berkshire, England. Purley is centred 3 miles (4.8 km) north-west of Reading, 1 mile (1.6 km) east of Pangbourne, and 22 miles (35 km) south-east of Oxford. Consequently, Reading is the principal social, economic and cultural centre for the people of Purley. Historically, Purley comprised three separate manors and associated settlements. In the centre there is an historic area named variously Lething or Burley (Domesday) which accommodated traders and craftsmen alongside the main Reading to Oxford road. 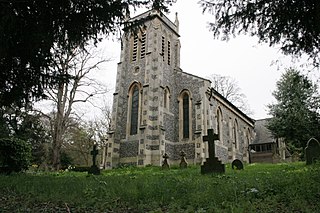 Sulham is a village in West Berkshire, England. The larger village of Tidmarsh is adjacent to Sulham on the west side, with Tilehurst on the east side.

Beech Hill is a small village and civil parish in Berkshire, England. It is in the south east of the West Berkshire unitary authority area and bounds Hampshire and Wokingham district.

Frilsham is a village and civil parish 4 miles (6.4 km) from Newbury, in the English county of Berkshire.

Boxford is a village and civil parish in the unitary authority of West Berkshire, part of Berkshire in England. The village is on the east bank of the River Lambourn, about 4 miles (6.4 km) northwest of Newbury but south of the M4 motorway. The hamlet of Westbrook is on the opposite bank of the Berkshire Downs tributary.

Burghfield is a village and large civil parish in West Berkshire, England, with a boundary with Reading. Burghfield can trace its history back to before the Domesday book, and was once home to three manors: Burghfield Regis, Burghfield Abbas and Sheffield. Since the 1980s the population of Burghfield has nearly doubled with the construction of many new housing estates, dependent for its employment on, for instance, Reading, Newbury and Basingstoke and the M4 corridor which bisects the edge of the area.

Beenham is a village and civil parish centred 6 miles (9.7 km) east of Newbury in the West Berkshire district of Berkshire, England.

Wokefield is a hamlet and civil parish in the West Berkshire district of Berkshire, England, south of Reading. The parish includes the hamlets of Goddard's Green and Bloomfield Hatch. It also includes part of the former parish of Sulhamstead and Grazeley.

Britwell Salome is a village and civil parish in South Oxfordshire, England centred 4+1⁄2 miles (7 km) northeast of Wallingford. The 2011 Census recorded the parish's population as 204.

Longworth is a village and civil parish in the Vale of White Horse, England. The 1974 boundary changes transferred it from Berkshire to Oxfordshire. It lies about 7 miles (11 km) west of Abingdon-on-Thames and 9 miles (14 km) south-west of Oxford. The 2011 Census recorded a population of 566, which was estimated at 570 in 2019. The parish is bounded by the River Thames to the north, the A420 road to the south, and field boundaries to the east and west. The land slopes from the A420 to the river, except at Harrowdown Hill near the north-east corner of the parish, which has a summit of 325 feet (99 m). 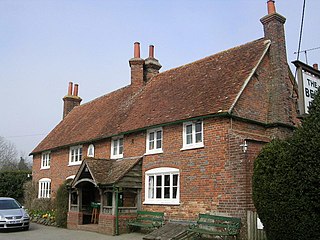 The Bell Inn is a pub at the village of Aldworth, in the English county of Berkshire. It won CAMRA's National Pub of the Year in 1990, and received the accolade again for 2019. It is a grade II listed building and is the only pub in Berkshire with a grade II listed interior. It is also on the Campaign for Real Ale's National Inventory of Historic Pub Interiors.