Tom Uglys Bridge are two road bridges, completed in 1929 and 1987, that carry the Princes Highway

across the Georges River in southern Sydney, in the state of New South Wales, Australia. The bridges link the St George area at Blakehurst to the Sutherland Shire at Sylvania. Tom Uglys Bridge is one of six major road crossings of Georges River.

The 1929 Pratt truss bridge is listed on the New South Wales State Heritage Register and carries three lanes of northbound vehicular traffic on the Princes Highway. The 1987 concrete box girder bridge was built to the east of the older bridge and carries the three southbound lanes of the highway. Both bridges have shared bicycle and pedestrian pathways.

Tenders were called to construct a punt for Tom Ugly's Point in 1864. [6] A hand-operated punt service from Tom Uglys Point to Horse Rock Point commenced. [7] The ferry service was improved and expanded over the years. In 1882 a steam-driven ferry, guided by steel cables, was installed. It crossed the river in less than ten minutes. The punt was 16 metres (54 ft) long, had a 3.4-metre (11 ft) wide roadway. [8] and was capable of carrying six horse-drawn vehicles. By 1898 a larger steam-driven ferry began operation. It was capable of carrying one hundred passengers and fifteen vehicles. [7] A new punt capable of carrying 28 vehicles and making the crossing in three minutes was installed in 1922. [9] By 1929 there were two cable ferries operating, and delays of several hours were experienced on weekends and public holidays.

Following a long campaign by local councils and motoring authorities, a New South Wales Government loan to Sutherland Shire Council was used to finance the replacement of one the punt services across the Georges River. [3] The Bill for the building of a bridge across the Georges River was introduced into New South Wales Parliament in 1923, and the foundation stone for the bridge was laid on 7 June 1924. The funds borrowed by Sutherland Shire Council were to be repaid by a bridge toll once it was opened. As use of the punt was free the bridge toll was controversial. [10] The crossing was first opened for traffic on 26 April 1929, [11] and officially opened by the Governor of New South Wales on 11 May 1929. It was known as the "George's River Bridge".

The toll was collected on the Sylvania side of the bridge by toll collectors who stood on the road. On 31 May 1952 the tolls were removed [3] when the Council had repaid the loan to the NSW Government.

In the late 1940s the lanes on the bridge were reconfigured to provide a third lane, and this allow the introduction of a tidal flow system (northbound in the morning and southbound in the evening), which continued until the second bridge was opened. Notwithstanding the creation of the third lane, by the mid 1960s congestion had grown to a significant level, especially on summer weekend afternoons. However it was not for another twenty years that funding was allocated by the New South Wales government for the design and construction of a duplicate bridge.

In 2006, the 1929 steel truss bridge was repainted. The original lead paint was removed using a blasting process and an air extraction system was employed to safely remove airborne particles, protecting the environment as well as the workers. [2]

The second bridge, which opened on 17 October 1987, also comprises nine spans (in order to place the piers in line with those of the first bridge) of three identical steel box girders, composite with a cast-in-place reinforced concrete deck; the major spans are 70 metres (230 ft) in length with end spans of 50 metres (160 ft). [5]

The new bridge was designed to carry four lanes of traffic. During repair work on the 1929 bridge, when it was temporarily closed to traffic, the 1987 bridge was configured both for one lane northbound and three lanes southbound.

Features of both bridges

On the southern side, between the two bridges, is a boat ramp, accessible from the northbound bridge approach. On the northern side a loop road allows drivers travelling south along the Princes Highway (A1) to avoid the bridge and return northwards along the highway.

There are several theories about the origin of the name of the point.

The name was officially adopted to distinguish between the various subsequent bridges across Georges River, after the opening of the Captain Cook Bridge in 1965 and the Alfords Point Bridge in 1973. [15]

Gladesville Bridge is a heritage-listed concrete arch road bridge that carries Victoria Road over the Parramatta River, linking the Sydney suburbs of Huntleys Point and Drummoyne, in the local government areas of Canada Bay and Hunter's Hill, in New South Wales, Australia. Despite its name, the bridge is not located in Gladesville.

The Ryde Bridge(s), also called the Uhrs Point Bridge, are two road bridges that carry Concord Road, part of the A3, across Parramatta River from Ryde in the northern suburbs of Sydney to Rhodes in Sydney's inner west, in New South Wales, Australia.

Blakehurst is a suburb in southern Sydney, in the state of New South Wales, Australia 18 kilometres south of the Sydney central business district, in the local government area of the Georges River Council. It is part of the St George area.

The Eastern Distributor is a 6-kilometre-long (4 mi) motorway in Sydney, New South Wales, Australia. Part of the M1, the motorway links the Sydney central business district with Sydney Airport. The centre-piece is a 1.7 km (1.1 mi) tunnel running from Woolloomooloo to Surry Hills. Built as a build-own-operate-transfer project, it is 75.1% owned by Transurban. 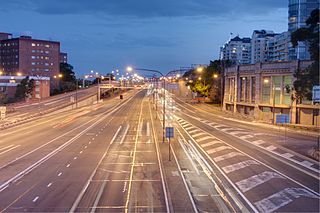 The Warringah Freeway is a 3-kilometre (1.9 mi) divided freeway located in Sydney, New South Wales, Australia. The freeway forms part of the M1, the Sydney Orbital Network, and the Highway 1 network. The primary function of the freeway is to provide an alternative high-grade route from the Sydney Harbour Tunnel and the Bradfield Highway at Milsons Point to the A8 and the Gore Hill Freeway. The freeway reduces traffic demands on the Pacific Highway throughout Sydney's lower north shore, bypassing North Sydney and Crows Nest. Completed in a series of stages between June 1968 and August 1992, the Warringah Freeway provides a vital link to access most of the suburbs in Sydney and is also a major route to the north, south, east and west of the central business district.

The Iron Cove Bridge is a heritage-listed road bridge that carries Victoria Road (A40) across Iron Cove, linking the Sydney suburbs of Drummoyne to Rozelle in the City of Canada Bay local government area of New South Wales, Australia.

Princes Bridge, originally Prince's Bridge, is a bridge in central Melbourne, Australia that spans the Yarra River. It is built on the site of one of the oldest river crossings in the city, and forms a gateway into the central city from the south. The bridge connects Swanston Street on the north bank of the Yarra River to St Kilda Road on the south bank, and carries road, tram and pedestrian traffic. The present bridge was built in 1888 and is listed on the Victorian Heritage Register. 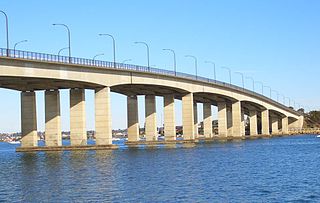 The Captain Cook Bridge is a road bridge that carries Taren Point and Rocky Point Roads across the Georges River in southern Sydney, in the state of New South Wales, Australia. The precast prestressed concrete girder bridge crosses near the river mouth as it empties into Botany Bay; and links the St George and Sutherland areas of Sydney. The bridge comprises a dual carriageway with three lanes in each direction of highway grade-separated conditions; and pedestrian and bicycle traffic, via two grade-separated paths. on the eastern and western sides of the bridge. 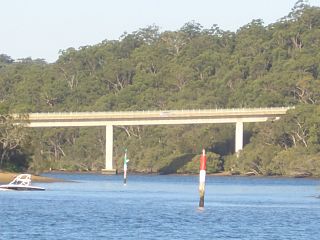 Alfords Point Bridge is a twin 445-metre-long (1,460 ft) concrete and steel box girder road bridge that carries Alford Point Road as state route A6 across the lower Georges River between Padstow Heights in the City of Bankstown and Alfords Point in the Sutherland Shire in Sydney, New South Wales, Australia. 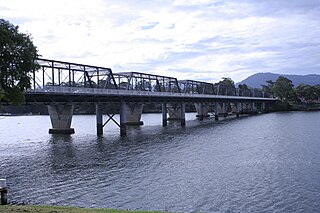 The Victoria Bridge (Penrith), also known as the Victoria Bridge over Nepean River and officially known as The Nepean Bridge, is a heritage-listed former railway bridge and now wrought iron box plate girder road bridge across the Nepean River on the Great Western Highway in the western Sydney suburb of Penrith in the City of Penrith local government area of New South Wales, Australia. The bridge was designed by John Whitton, the Engineer–in–Chief of New South Wales Government Railways, and built from 1862 to 1867 by William Piper, Peto Brassey and Betts (superstructure), William Watkins (piers). It is also known as Victoria Bridge, The Nepean Bridge and RTA Bridge No. 333. It was added to the New South Wales State Heritage Register on 27 May 2016.

The Peats Ferry Bridge is a steel truss bridge that carries the Old Pacific Highway (B83) across the Hawkesbury River, between Kangaroo Point and Mooney Mooney Point, located 40 kilometres (25 mi) north of Sydney in New South Wales, Australia. The bridge carries the Hornsby to Kariong section of highway, while the adjacent Brooklyn Bridge carries the Pacific Motorway (M1).

Percy Allan was a civil engineer who designed many public works in New South Wales, including the design of 583 bridges. 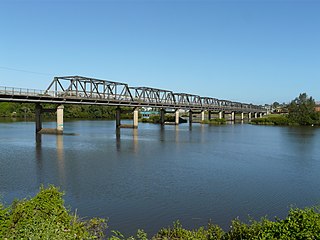 The Prince Alfred Bridge is a wrought iron truss and timber beam partially-disused road bridge over the Murrumbidgee River and its floodplain at Middleton Drive, Gundagai, Cootamundra-Gundagai Regional Council, New South Wales, Australia. The heritage-listed road bridge was designed by William Christopher Bennett and built from 1864 to 1867 by Francis Bell. It is also known as Prince Alfred Bridge - Iron Road Bridge and Iron Bridge over Murrumbidgee River at Gundagai. The property is owned by Roads and Maritime Services, an agency of the Government of New South Wales. The bridge was added to the New South Wales State Heritage Register on 5 July 2019 and on the Register of the National Estate on 21 March 1978.

The Brooklyn Bridge is a concrete girder bridge that carries the Pacific Motorway (M1) across the Hawkesbury River between Kangaroo Point to Mooney Mooney Point, located 35 kilometres (22 mi) north of Sydney in New South Wales, Australia. The bridge comprises a dual carriageway with three lanes in each direction of motorway grade-separated conditions.

Milperra Bridge is a road bridge that carries Newbridge Road across the Georges River, located between Bankstown and Liverpool, in south-western Sydney, New South Wales, Australia. The bridge is located adjacent to Henry Lawson Drive and the Bankstown Airport; and Newbridge Road serves as a continuation of Canterbury and Milperra Roads.