Tombstone Historic District is a historic district in Tombstone, Arizona that is significant for its association with the struggle between lawlessness and civility in frontier towns of the wild west, and for its history as a boom-and-bust mining center. Located within the historic district is the legendary O.K. Corral associated with the famous Gunfight at the O.K. Corral that actually took place on Fremont Street, near the back entrance to the O.K. Corral, on October 26, 1881. The district was declared a National Historic Landmark in 1961. [2] [3]

The Tombstone Historic District had ill-defined boundaries when it was first designated in 1961. The landmarked area was generally agreed to include at least the area bounded by Toughnut, Fremont, 3rd and 6th Streets, but its precise limits were a subject of continuing debate through at least 1986. The district covers about 42 acres (17 ha) of downtown Tombstone, and is anchored at its southwestern corner by the former Cochise County Courthouse, now the centerpiece of Tombstone Courthouse State Historic Park. [3]

Buildings in the district typically have an appearance (either original or restored) to the town's early mining boom period of the 1880s. Although mining began in the area in the 1870s, fires in 1881 and 1882 destroyed most of its central business district. Significant among the buildings constructed after those fires are the 1882 City Hall, the 1881 Schieffelin Hall, a large performance venue built out of adobe, and the 1881 Bird Cage Theatre, a theater and playhouse which also housed a brothel. [3] 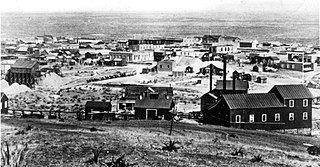 The Gunfight at the O.K. Corral was a 30-second shootout between lawmen and members of a loosely organized group of outlaws called the Cowboys that took place at about 3:00 p.m. on Wednesday, October 26, 1881, in Tombstone, Arizona Territory. It is generally regarded as the most famous shootout in the history of the American Wild West. The gunfight was the result of a long-simmering feud, with Cowboys Billy Claiborne, Ike and Billy Clanton, and Tom and Frank McLaury on one side and town Marshal Virgil Earp, Special Policeman Morgan Earp, Special Policeman Wyatt Earp, and temporary policeman Doc Holliday on the other side. Billy Clanton and both McLaury brothers were killed. Ike Clanton, Billy Claiborne, and Wes Fuller ran from the fight. Virgil, Morgan, and Doc Holliday were wounded, but Wyatt Earp was unharmed. Wyatt is often erroneously regarded as the central figure in the shootout, although his brother Virgil was Tombstone city marshal and deputy U.S. marshal that day and had far more experience as a sheriff, constable, marshal, and soldier in combat. 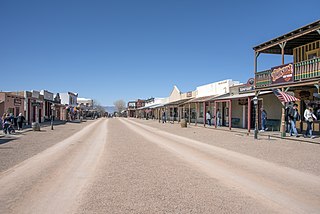 Tombstone is a historic city in Cochise County, Arizona, United States, founded in 1879 by prospector Ed Schieffelin in what was then Pima County, Arizona Territory. It became one of the last boomtowns in the American frontier. The town grew significantly into the mid-1880s as the local mines produced $40 to $85 million in silver bullion, the largest productive silver district in Arizona. Its population grew from 100 to around 14,000 in less than seven years. It is best known as the site of the Gunfight at the O.K. Corral and presently draws most of its revenue from tourism. 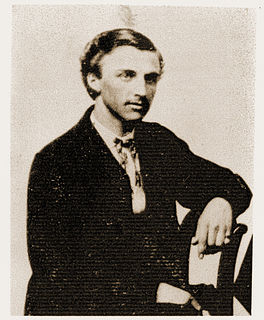 Billy Claiborne, was an American outlaw Cowboy, drover, miner, and gunfighter in the American Old West. He killed James Hickey in a confrontation in a saloon, but it was ruled self-defense. He was present at the beginning of the Gunfight at the O.K. Corral, but was unarmed and ran from the shootout. Only a year later, while drunk, he confronted gunfighter "Buckskin" Frank Leslie and was killed. 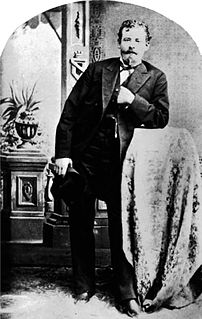 Joseph Isaac Clanton was a member of a loose association of outlaws known as The Cowboys who clashed with lawmen Wyatt, Virgil and Morgan Earp as well as Doc Holliday. On October 26, 1881, Clanton was present at the Gunfight at the O.K. Corral in the boomtown of Tombstone, Arizona Territory but was unarmed and ran from the gunfight, in which his 19-year-old brother, Billy, was killed.

The Tombstone Epitaph is a Tombstone, Arizona-based monthly publication that covers the history and culture of the Old West. Founded in January 1880, The Epitaph is the oldest continually published newspaper in Arizona.

The Guadalupe Canyon Massacre was an incident that occurred on August 13, 1881 in the Guadalupe Canyon area of the southern Peloncillo Mountains – Guadalupe Mountains. Five American men were killed in an ambush, including "Old Man" Clanton, the alleged leader. They were believed to belong to the Cowboys, an outlaw group based in Pima and Cochise counties in Arizona. Two men survived the attack. The canyon straddles the modern Arizona and New Mexico state line and connects the Animas Valley of New Mexico with the San Bernardino Valley of Arizona. During the American Old West, the canyon was a key route for smugglers into and out of Mexico. 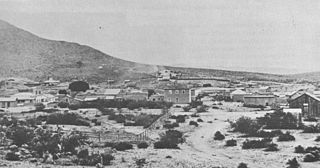 Charleston is a ghost town in Cochise County in the southeastern part of the U.S. state of Arizona. It was occupied from the late-1870s through the late-1880s, and was located in what was then known as the Arizona Territory. Located on the west bank of the San Pedro River, Charleston's economy was based on milling silver ore mined from nearby Tombstone in the community of Millville, located directly across the river.

Tombstone Courthouse State Historic Park is a state park of Arizona in the United States. Located in Tombstone, the park preserves the original Cochise County courthouse. The two-story building, constructed in 1882 in the Victorian style, is laid out in the shape of a cross and once contained various county offices, including those of the sheriff, recorder, treasurer, and the Board of Supervisors as well as courtrooms and a jail. Inside, the courthouse contains a museum with numerous artifacts from the town's history while outside, a replica gallows has been constructed in the courtyard to mark the spot where seven men were hanged for various crimes. The park was one of the first to be designated as a state park and in 1959 was the first to open following the 1957 establishment of the Arizona State Parks Board.

San Bernardino Ranch is an historic ranch house in the southern San Bernardino Valley near the San Bernardino National Wildlife Refuge in extreme southeast Cochise County, Arizona, United States. It is significant for its association with the beginning of cattle ranching in southern Arizona and northern Mexico. The ranchland and valley are part of the headwaters region of the Yaqui River.

Hereford is a populated place in Cochise County along the San Pedro Riparian National Conservation Area in the southern part of the U.S. state of Arizona. It is southeast of Sierra Vista and is a part of the Sierra Vista-Douglas micropolitan area. The elevation is 4,193 feet at the location of the original townsite at the far eastern end of the unincorporated area; the residential area runs for another 8 miles west from this location, blending into the unincorporated area of Nicksville at an elevation of approximately 4800'. Hereford Station Post Office is located at the far western end of Nicksville, at the foot of the Huachuca Mountains. 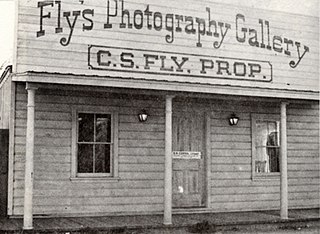 Camillus "Buck" Sydney Fly was an Old West photographer who is regarded by some as an early photojournalist and who captured the only known images of Native Americans while still at war with the United States. He took many other pictures of life in the mining boom town of Tombstone, Arizona and the surrounding region. He recognized the value of his photographs to illustrate periodicals of the day and took his camera to the scenes of important events where he deliberately recorded them and resold pictures to editors nationwide.

The O.K. Corral was a livery and horse corral from 1879 to about 1888 in the mining boomtown of Tombstone, Arizona Territory, in the southwestern United States near the border with Mexico.

The Cochise County Cowboys were a loosely associated group of outlaw cowboys in Pima and Cochise County, Arizona Territory in the late 19th century. The term cowboy had only begun to come into wider usage during the 1870s, and in the place and time, Cowboy was synonymous with rustler. Cattle thieves frequently rode across the border into Mexico and stole cattle from Mexican ranches, which they drove back across the border and sold in the United States. Some modern writers consider them to be one of the first and earliest forms of organized crime syndicates in American history. 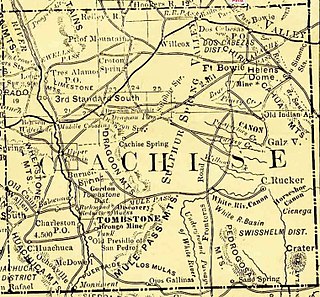 Cochise County in southeastern Arizona was the scene of a number of violent conflicts in the 19th-century American Old West, including between white settlers and Apache Indians, between opposing political and economic factions, and between outlaw gangs and local law enforcement. Cochise County was carved off in 1881 from the easternmost portion of Pima County during a formative period in the American Southwest. The era was characterized by rapidly growing boomtowns, the emergence of large-scale farming and ranching interests, lucrative mining operations, and the development of new technologies in railroading and telecommunications. Complicating the situation was staunch resistance to white settlement from local Native American groups, most notably during the Apache Wars, as well as Cochise County's location on the border with Mexico, which not only threatened international conflict but also presented opportunities for criminal smugglers and cattle rustlers.

Schieffelin Hall is a building from the American Old West in Tombstone, Arizona Territory, the largest standing adobe structure still existent in the United States southwest. It was built in 1881 by Albert Schieffelin, brother of Tombstone founder Ed Schieffelin, and William Harwood as a first class opera house, theater, recital hall, and a meeting place for Tombstone citizens.

Mary Edith "Mollie" Fly (1847–1925) was a late 19th and early 20th century American photographer who co-founded and managed Fly's Photography Gallery in Tombstone, Arizona, with her husband, photographer C. S. Fly. She ran the studio solo for a decade after his death. There were very few women photographers in this period, and her contributions were recognized in 1989 when she was inducted into the Arizona Women's Hall of Fame.