Tonatia is a small genus of South and Central American phyllostomid bats. [1]

The New World leaf-nosed bats (Phyllostomidae) are found from southern North America to South America, specifically from the Southwest United States to northern Argentina. They are ecologically the most varied and diverse family within the order Chiroptera. Most species are insectivorous, but the phyllostomid bats include within their number true predatory species and frugivores. For example, the spectral bat, the largest bat in the Americas, eats vertebrate prey, including small, dove-sized birds. Members of this family have evolved to use food groups such as fruit, nectar, pollen, insects, frogs, other bats, and small vertebrates, and in the case of the vampire bats, even blood.

The genus Plecotus consists of the long-eared bats. Many species in the genus have only been described and recognized in recent years. 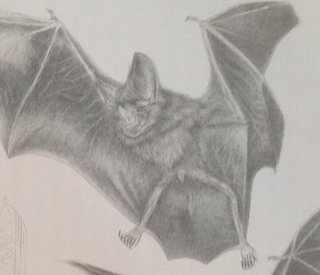 The greater round-eared bat is a bat species from South America. It is found in northeastern and southern Brazil, northern Argentina, Paraguay and Bolivia. The species feeds on fruit as well as hunting small birds. Once caught, birds are taken to a shelter and consumed.

The stripe-headed round-eared bat is a species of bat from family Phyllostomidae. It can be found on forests in Central and South America.

Lophostoma is a genus of Central and South American bats in the family Phyllostomidae.

The western round-eared bat is a bat species found only on the Pacific coast of northwestern Ecuador.