Eury was born into a racing family in Kannapolis, North Carolina. His family lived near the Earnhardts north of Charlotte and the heads of both families, Ralph Earnhardt and Ralph Eury, were close friends. Tony Eury Jr. is the son of Tony Eury Sr. and Sandra Gee, daughter of famed engine builder Robert Gee. Dale Earnhardt Sr. married Sandra's sister Brenda, and they had Dale Earnhardt Jr. as a child. Despite both marriages ending in divorce, both sons grew up together.

Eury worked with Dale Earnhardt, Inc., from 1991 to 2007. In 1993, he became the car chief (and one of the tire changers) for Dale Earnhardt's NASCAR Busch Series team, working under his father, crew chief Tony Eury Sr. In the 2004, 2006, and 2008 seasons, Eury helped Dale Earnhardt Jr. get into the Chase for the NASCAR Sprint Cup and challenge for the NASCAR Sprint Cup Championship. The 2004 season began with a win at the Daytona 500, the first of 6 wins that season.

In 2008, he began his crew chief career with Hendrick Motorsports, as Dale Earnhardt Jr. began racing for Rick Hendrick. After a poor showing in the 2009 Coca-Cola 600, some began to talk of Eury's possible firing and that he will be replaced by Ron Malec. [1] He was transferred to the R&D team on May 28, 2009. He was replaced by Lance McGrew. [2] On December 10, 2012, Eury was hired by Swan Racing (was Inception Motorsports) as crew chief for David Stremme in the Sprint Cup Series replacing Steven Lane. [3]

In 2018, Eury was hired by Premium Motorsports to serve as the crew chief for Danica Patrick in her final NASCAR race in the 2018 Daytona 500. 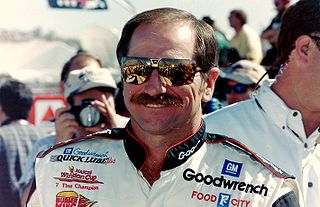 Ralph Dale Earnhardt Sr. was an American professional stock car driver and team owner, who raced from 1975 to 2001 in the former NASCAR Winston Cup Series, most notably driving the No. 3 Chevrolet for Richard Childress Racing. The third child of racing driver Ralph Earnhardt and Martha Earnhardt, he began his career in 1975 in the World 600. Earnhardt won a total of 76 Winston Cup races over the course of his 4 decade career, including four Winston 500s and the 1998 Daytona 500. He also earned seven Winston Cup championships, a record held with Richard Petty and Jimmie Johnson. His aggressive driving style earned him the nicknames "The Intimidator", "The Man in Black", and "Ironhead". He is regarded as one of the greatest drivers in NASCAR history.

Ralph Dale Earnhardt Jr. is an American semi-retired professional stock car racing driver, team owner, author, and an analyst for NASCAR on NBC. He competes part-time in the NASCAR Xfinity Series, driving the No. 8 Chevrolet Camaro for his team JR Motorsports. He is the son of Dale Earnhardt Sr., who was inducted into the NASCAR Hall of Fame. He is also the grandson of NASCAR driver Ralph Earnhardt, the brother of Kelley Earnhardt-Miller, the half-brother of former driver Kerry Earnhardt and the uncle of driver Jeffrey Earnhardt. 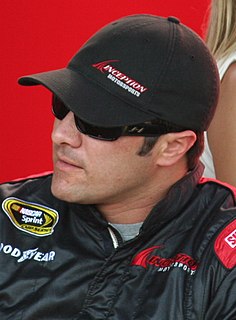 Stewart-Haas Racing is an American professional stock car racing team that currently competes in the NASCAR Cup Series, the NASCAR Xfinity Series, the NASCAR K&N Pro Series West and eNASCAR Coca-Cola iRacing Series. The team is co-owned by three-time NASCAR Cup Series champion Tony Stewart and Haas Automation founder Gene Haas. It was founded in 2002 as Haas CNC Racing after Haas, whose company was a sponsor of Hendrick Motorsports, elected to form his own team. In 2009, Stewart, who had been driving for Joe Gibbs Racing, made a deal with Haas to drive for the team and in return receive a 50% stake in it.

James Robert Yates was a NASCAR engine builder and former owner of the Sprint Cup Series team Yates Racing, owned since 2007 by his son Doug. He purchased the team from Harry Ranier in 1988, with driver Davey Allison. 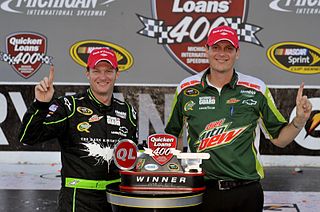 Steve Letarte is a sportscaster and a NASCAR crew chief. Born in Cornish, Maine, he is currently employed at NBC Sports as a color analyst on their telecasts for NASCAR. He left Hendrick Motorsports following the 2014 season after 20 years with the team. From September 2005 to November 2010, he was the pit crew chief for Jeff Gordon, taking over the No. 24 Chevrolet from Robbie Loomis. From February 2011 to November 2014 he was Dale Earnhardt Jr.'s crew chief. He returned in 2021 to be the crew chief of Corey Lajoie’s No. 7 Spire Motorsports team.

JR Motorsports is an American professional stock car racing team that currently competes in the NASCAR Xfinity Series, eNASCAR Coca-Cola iRacing Series, CARS Tour, and occasionally in the NASCAR Advance Auto Parts Weekly Series. The team is based in Mooresville, North Carolina, co-owned by former NASCAR Cup Series driver Dale Earnhardt Jr., his sister Kelley Earnhardt Miller, and the owner of his former Cup Series team, Rick Hendrick. As of 2020, the team fields four full-time entries in the Xfinity Series: the No. 1 Chevrolet Camaro SS full-time for Michael Annett, the No. 7 Camaro full-time for Justin Allgaier, the No. 8 Camaro full-time for multiple drivers including Josh Berry, Miguel Paludo, Dale Earnhardt Jr., and Sam Mayer, and the No. 9 Camaro full-time for Noah Gragson. 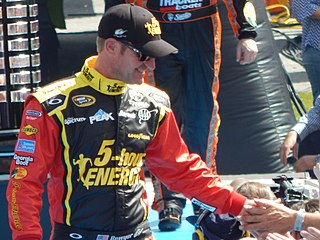 The 2008 NASCAR Nationwide Series began on February 16 at Daytona International Speedway with the Camping World 300, and ended on November 15 at Homestead-Miami Speedway with the Ford 300. This was the first season in which NASCAR's second-tier series was known as the Nationwide Series, ending the 26-year sponsorship by Anheuser-Busch's Busch Beer. The seven-year agreement gives Nationwide Insurance the exclusive rights to tie its brand to NASCAR's second most popular racing series.

Lance McGrew is a former crew chief for Hendrick Motorsports and currently works in their research and development division.

Tony Gibson is a retired American auto racing crew chief. He last worked for the #41 Stewart-Haas Racing Ford driven by Kurt Busch in the NASCAR Monster Energy NASCAR Cup Series. He was the crew chief for Busch's 2017 Daytona 500 victory. Gibson worked as car chief on Alan Kulwicki’s title team of 1992 and was also the car chief on Jeff Gordon’s title teams of 1998 and 2001. With Dale Earnhardt Incorporated, Gibson, was the crew chief for racers such as Steve Park, Michael Waltrip, Dale Earnhardt, Jr, Mark Martin and at Stewart-Haas Racing for Ryan Newman from 2009 to the majority of 2012 and Danica Patrick for 2013 to most of 2014 before swapping drivers.

The 2012 NASCAR Sprint Cup Series was the 64th season of NASCAR professional stock car racing in the United States and the 41st modern-era Cup season. The season started on February 18, 2012, at Daytona International Speedway, with the Budweiser Shootout, followed by the Daytona 500 on February 27. The season continued with the Chase for the Sprint Cup beginning on September 16 at Chicagoland Speedway and concluded with the Ford EcoBoost 400 on November 18 at Homestead-Miami Speedway.

Swan Racing was a stock car racing team that competed in the NASCAR Sprint Cup Series until the 2014 season. The team was founded as Inception Motorsports which fielded a single No. 30 team in the Cup Series in 2011 and 2012 before being purchased by Swan Energy CEO Brandon Davis late in 2012. The team was headquartered in Mooresville, North Carolina in the United States. David Stremme was the team's original driver, before being replaced by rookies Cole Whitt and Parker Kligerman at the end of 2013. The team expanded to two teams in 2014 for Whitt and Kilgerman, attempting and qualifying for every event that season until the woes of sponsorship kicked in following the eighth race of the season. The team shut down in April 2014; its owners points, employees, and most of its assets moved to Xxxtreme Motorsport and BK Racing, though Parker Kligerman remained under contract through year's end.

Kelley King Earnhardt Miller is an American businesswoman. She is the vice-president of JR Motorsports which she co-owns with her brother, Dale Earnhardt Jr. and she is the daughter of Dale Earnhardt. The team's driver Chase Elliott won the 2014 NASCAR Nationwide Series title. In 2018, Tyler Reddick, another driver for JR Motorsports, won the 2018 NASCAR Xfinity Series Championship.

The 2015 NASCAR Sprint Cup Series was the 67th season of professional stock car racing in the United States and the 44th modern-era Cup season. The season began at Daytona International Speedway with the Sprint Unlimited exhibition race, the Budweiser Duels, and the Daytona 500. The season ended with the Ford EcoBoost 400 at Homestead-Miami Speedway. Kyle Busch won the championship, despite missing the first third of the season due to severe leg injuries suffered in an Xfinity Series race at Daytona. Busch also became the first Toyota driver to win a Cup championship. Despite not running the full season, Brett Moffitt was named Rookie of the Year.

The 2017 Monster Energy NASCAR Cup Series was the 69th season of professional stock car racing in the United States, and the 46th modern-era Cup series season. The season began at Daytona International Speedway with the Advance Auto Parts Clash, the Can-Am Duel qualifying races and the 59th running of the Daytona 500. The season ended with the Ford EcoBoost 400 at Homestead-Miami Speedway. Jimmie Johnson entered the season as the defending champion, having won his record-tying seventh Cup championship that he shares with Richard Petty and Dale Earnhardt. Martin Truex Jr. of Furniture Row Racing won the championship, his first in the series. Toyota won the Manufacturers' Championship for the second year in a row.

Dale Earnhardt, Inc. (DEI) was a race team founded by Dale Earnhardt and his wife, Teresa Earnhardt, to compete in the NASCAR series, the highest level of competition for professional stock car racing in the United States. From 1998 to 2009, the company operated as a NASCAR-related organization in Mooresville, North Carolina, United States. Earnhardt was a seven-time Winston Cup champion. He died in a crash on the final lap of the 2001 Daytona 500. Despite his ownership of the DEI racing team, Earnhardt never drove for his team in the Winston Cup; instead, he raced for his long-time mentor and backer Richard Childress at RCR. In the late-2000s, DEI suffered critical financial difficulties after drivers Dale Earnhardt Jr., and sponsors Anheuser-Busch, National Automotive Parts Association and United States Army left the team; DEI consequently merged with Chip Ganassi Racing in 2009, moving their equipment into the latter's shop, while the former's closed down.