Son of race driver Charles Kendall, Kendall began his racing career competing at the IMSA GT Championship. He drove a Mazda RX-7 in the GTU category while studying and by the time he completed his studies, he took the 1986 and 1987 championships. Later he won three other titles in the same car, which he still owns.[ citation needed ]

He later dominated the SCCA Trans-Am Series in the 1990s, scoring four series championships. His greatest year came in 1997, when he won 11 races in a row out of the 13 on the schecule—almost a perfect season. During this time, Kendall was also honored by representing the series for six IROC seasons.

He ran in fourteen NASCAR Cup Series races between 1987 and 1998. He raced primarily only on road courses as a road course ringer, and scored one Top-10 finish. He nearly won the 1991 Banquet Frozen Foods 300K at Sears Point Raceway, in which he led 12 laps before cutting a tire with two laps to go following a late-race collision with Mark Martin. The two drivers, who were briefly Roush-Fenway Racing teammates in Trans-Am, would not speak about the incident for years until they rehashed their late-race collision on Martin's podcast, twenty years later. [2]

While competing in Winston Cup as a ringer, Kendall had a single start in the NASCAR Busch Series. Kendall also had one start with Dick Johnson Racing at the 1996 AMP Bathurst 1000 in Australia co-driving with Steven Johnson, the son of team boss Dick Johnson. Johnson and Kendall finished 8th in their Ford EF Falcon. [3] Of the American drivers who have competed in the Bathurst 1000 since the race moved to Bathurst in 1963 including three time Indianapolis 500 winner Johnny Rutherford, Janet Guthrie (the first woman to ever qualify for the Indy 500 in 1977), Dick Barbour, Sam Posey, Bob Tullius, John Andretti and Scott Pruett, Kendall holds the distinction of being the first one to have ever finished the race (Pruett in his only start would finish 11th the next year at Bathurst [4] ).

On June 30, 1991, Kendall suffered serious leg injuries at Watkins Glen when a mechanical failure caused his Intrepid RM-1 IMSA GTP car to leave the track and crash head-on into a tire wall. This occurred along the same area of track where J. D. McDuffie of NASCAR Winston Cup fame was killed only a month later, and both crashes led to the addition of a bus stop chicane on the backstretch. Kendall spoke of this incident during Episode 4, Season 2 of the Speed Channel series, Setup as a "crossroads in his racing career." He returned to racing close to a year later in June 1992. He also discussed his accident on Athlete 360 , a sports medicine television show hosted by Mark Adickes.

In the 2000s Kendall became a television analyst for the Champ Car series. He is also the host of the Speed Test Drive promotional television series where he and another professional race car driver drive a new vehicle on a race course while being able to remotely talk to each other and offer their positive thoughts on the car.

On July 15, 2012, Kendall revealed on SpeedTV's WindTunnel program that he would be returning to the cockpit as one of four full-time drivers in a factory-backed Dodge Viper effort competing in the American Le Mans Series.

On September 22, 2013, Kendall's new show, Driven - A Race Without Boundaries, premiered on Fox Sports 1. It also stars Rhys Millen and is hosted by Tiff Needell.

Kendall was raised in the city of La Cañada Flintridge, California and is a 1984 graduate of La Cañada High School.

Kendall earned a degree in economics from UCLA and to this day maintains an avid interest in business.[ citation needed ]

Robert Woodward Rahal is an American former auto racing driver and team owner. As a driver he won three championships and 24 races in the CART open-wheel series, including the 1986 Indianapolis 500. He also won the 2004 and 2020 Indy 500s as a team owner for Buddy Rice and Takuma Sato, respectively.

The International Motor Sports Association (IMSA) is a North American various auto racing sanctioning body based in Daytona Beach, Florida under the jurisdiction of the ACCUS arm of the FIA. It was started by John Bishop, a former executive director of SCCA, and his wife Peggy in 1969 with help from Bill France, Sr. of NASCAR. Beginning in 2014, IMSA is the sanctioning body of the WeatherTech SportsCar Championship, the premier series resulting from the merger of Grand-Am Road Racing and the American Le Mans Series presented by Tequila Patrón. IMSA is owned by NASCAR, as a division of the company.

Tommy Archer is a racing driver born in Duluth, Minnesota. Archer's racing experience spans 33 years. He has played a part in 38 racing championships since he began racing in 1970. For many years, he raced with his brother Bobby Archer, and were collectively known as the Archer Brothers. For the 2015 season, Archer is racing in the Trans-Am Series' TA2 class. 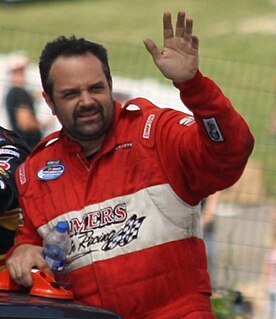 Ronald Charles Fellows CM is an accomplished Canadian SCCA Trans-Am, IMSA, and American Le Mans Series driver. Fellows holds the record for most wins by a foreign-born driver in NASCAR's top three series with six – four in Nationwide and two in Trucks. He also is a Member of the Order of Canada.

A road course ringer, also known as road course specialist, road course expert, or a road runner, is a non-NASCAR driver who is hired by a NASCAR Cup Series or Xfinity Series team to race, specifically on road courses. 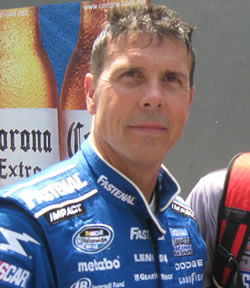 Scott Donald Pruett is a former American race car driver who has competed in NASCAR, CART, IMSA, Trans-Am and Grand-Am. He and his wife Judy have three children and are children's book authors.

William Theodore Ribbs Jr. is a retired American race car driver, racing owner, and sport shooter known for being the first African-American man to have tested a Formula One car and to compete in the Indianapolis 500. Ribbs competed in many forms of auto racing, including the Trans-Am Series, IndyCar, Champ Car, IMSA, and the NASCAR Cup Series and Gander Outdoors Truck Series. After retiring, he became a sport shooter in the National Sporting Clays Association.

Michael John Borkowski is an American race car driver. Borkowski has raced in a variety of cars and series, is experienced in both road and oval racing, but is best known for his victory over Tommy Kendall in the 1997 Trans-Am Series race at Pikes Peak International Raceway, ending Kendall's historic run of 11 consecutive race wins. Borkowski also went on to win the final race of the 1997 Trans-Am Series at the Reno Grand Prix.

Robert Franklin "Butch" Leitzinger is an American professional racing driver. He is best known as an ALMS driver with Dyson Racing, but he has also driven for a variety of other teams and race series.

Tony Adamowicz was an American racing driver, active from 1963 until his death. He won the Under 2-Liter class of the 1968 Trans-Am Championship and the 1969 SCCA Continental Championship.

Allan Maxwell Grice, known to motor-racing fans as "Gricey", is an Australian former racing driver and politician, most famous for twice winning the prestigious Bathurst 1000, and as a privateer driver of a Holden in the Australian Touring Car Championship.

Tomy Drissi is an American professional stock and sports car racing driver, and an advertising executive in the movie industry. A long-time competitor in the Sports Car Club of America's Trans-Am Series, he was the series' 2009 Champion. He currently competes in the American Le Mans Series for RSR Racing in the Prototype Challenge class.

ESPN SpeedWorld is the name of a former television series broadcast on ESPN from 1979–2006. The program that was based primarily based around NASCAR, CART, IMSA, Formula One, NHRA, and IHRA. The theme music is a based on the piano interlude from "18th Avenue " by Cat Stevens.

James Joyce Fitzgerald was an American racing driver. He is the winningest driver in Sports Car Club of America history, with over 350 career wins. Fitzgerald was also at one time the oldest driver to run a NASCAR Winston Cup Series race, being 65 years old when he ran in the 1987 Budweiser 400 at Riverside International Raceway for Hendrick Motorsports.

R. K. Smith is an American stock car racing driver. He has competed in the NASCAR Winston Cup Series in the early nineties, making two starts at Sonoma.