Vasser made his CART debut in 1992 and qualified for the Indianapolis 500, setting a record for the fastest qualifying run by a first-year driver. [2] Although he did become a top driver, his rise to prominence coincided with the CART–IRL split, so Vasser's best years were spent away from the Indianapolis 500. He has raced in the event on a one-off basis a few times since, finishing as high as fourth in the 2001 race.

Vasser won four races in 1996 and did enough to maintain a lead in the standings for most of the season, clinching the championship at the season's final race. [3] Teammate Alex Zanardi outperformed him over the next two years, winning the points championship both years. [4] Vasser teamed with Juan Pablo Montoya in 1999, finishing ninth in the points standings. In 2000, his last year with Chip Ganassi Racing, Vasser won the Houston Grand Prix for his first victory since 1998. [5]

For 2001, Vasser moved to the Pat Patrick team to drive the #40 Reynard Toyota. Despite having limited sponsorship for the car at first, Vasser started the season strong with four straight finishes of 4th to 6th place. Continuing the strong start to 2001, Jimmy was reunited with Target Chip Ganassi Racing driving for them in the Indianapolis 500. Jimmy ran well and finish 4th place as ChampCar drivers swept the top five spots at the 500. However, once returning to the ChampCar circuit, back to back crashes in race #5 at Milwaukee and race #6 at Detroit seemed to derail the season as Jimmy finished the final sixteen races of the season with only four more finishes of 5th to 7th.

After a disappointing year without even a podium, Vasser was able to secure the seat of the #8 Shell Lola Ford with Rahal Letterman Racing for 2002 which had finished 2nd in ChampCar points the previous season. In the Shell car, Vasser showed some muscle at Long Beach scoring the pole, leading laps late, and finishing 2nd behind Michael Andretti. Vasser and Rahal Letterman also crossed over into the IRL where they ran the IRL race in Fontana to prepare for Indianapolis and then the Indianapolis 500. Success was limited as Vasser scored only a 9th at Fontana and a gearbox failure cut short his Indy 500 race. Vasser's 2002 season in the Shell car was much improved over the previous year with Patrick Racing. Vasser really finished the year strong with scoring points in each of the final nine races including a podium at Miami and a dominating win at Fontana after a late-race pass of Michael Andretti. Vasser's Fontana win was to be the final win of his ChampCar career.

Without sponsorship at Rahal for 2003, Vasser had to look for opportunities with other teams and without many seats available for the 38-year-old he ended up with Stefan Johansson's startup American Spirit team. The team was not fully funded and they ran the Reynard chassis which were not up to the pace of the current Lola chassis cars. Additionally, Reynard had gone bankrupt so further development of the chassis had to be taken on by the teams so the performance gap to the Lolas continue to widen during the season. Except for a couple of fourth-place finishes, leading 15 laps at Cleveland, and podium at Surfer's Paradise in a wet/dry race the season was not very successful as rookie teammate Ryan Hunter-Reay was outpacing Vasser. Vasser reunited with Rahal Letterman for his final run at an Indianapolis 500 win but was again sidelined with gearbox failure during the race.

In 2004 he became co-owner of PKV Racing (later renamed to KV Racing Technology) along with Dan Pettit and Kevin Kalkhoven and was a driver for the team. In 2004, he broke the modern CART–Champ Car record for the most consecutive starts. [6] Vasser retired from open wheel racing in 2006, but remains active in his ownership role. He temporarily came out of retirement to drive in the final Champ Car World Series event at the 2008 Toyota Grand Prix of Long Beach. [7]

In 2006, Vasser competed in three Grand-Am Rolex Sports Car Series races, including the 24 Hours of Daytona, driving for GAINSCO/Blackhawk Racing. In 2007, he again drove for the renamed GAINSCO/Bob Stallings Racing at the 24 Hours of Daytona, and on Sept. 4, 2007, it was announced that he would return to the team for the season-ending Sunchaser 1000 km. Vasser drove again for Stallings' team beginning at Laguna Seca in May 2008, pairing with fellow Champ Car champion Cristiano da Matta.

In 2013, Vasser joined the Stadium Super Trucks and was scheduled to make his debut at Honda Indy Toronto. [8] However, he was injured prior to the race and was replaced by Davey Hamilton. [9]

Championship Auto Racing Teams (CART) was a sanctioning body for American open-wheel car racing that operated from 1979 to 2003. It sanctioned the PPG Indy Car World Series from 1979 until dissolving after the 2003 season. 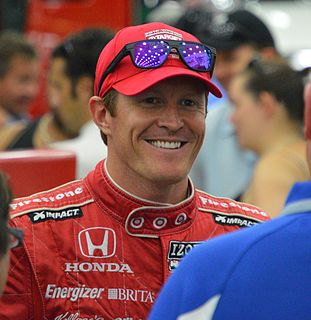 Scott Ronald Dixon is a professional racing driver from New Zealand. Competing for Chip Ganassi Racing since joining IndyCar, Dixon has won the championship five times: in 2003, 2008, 2013, 2015 and 2018. He also won the 92nd Indianapolis 500 in 2008 from pole position. With 46 wins, Dixon has the third highest winnings in American Championship Cars history, and is the leading active driver in the current IndyCar Series with 45 wins. He is also a three-time overall winner and one-time GTLM winner at the 24 Hours of Daytona. Alongside his five series' titles, Dixon won at least one race for fifteen seasons in a row between 2005 and 2019. 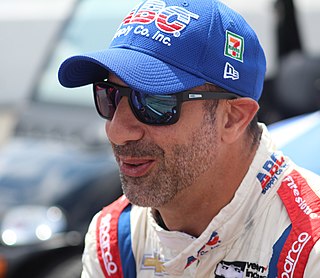 Chip Ganassi Racing Teams or simply Chip Ganassi Racing (CGR), is an American auto racing organization with teams competing in the NTT IndyCar Series and NASCAR Cup Series. They have formerly competed in the NASCAR Xfinity Series, Global Rallycross Championship, FIA World Endurance Championship and the IMSA WeatherTech SportsCar Championship. It was founded in 1990 by businessman and former race driver Chip Ganassi, from the assets of Patrick Racing to compete in the CART IndyCar World Series. 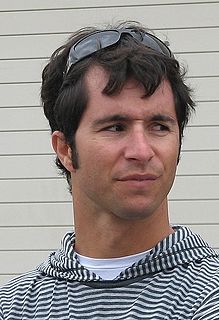 Oriol Servià i Imbers is a Spanish racing driver who competes part-time in the IndyCar Series. He raced for Dragon Racing in the 2014–15 Formula E season, and left the series prior to the 2015 Miami ePrix to become managing director for the technical and commercial partnerships of Dragon Racing. Servià holds a degree in mechanical engineering from the Polytechnic University of Catalonia. 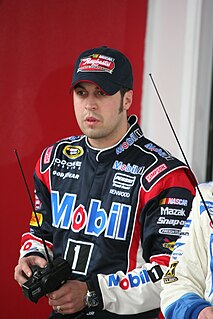 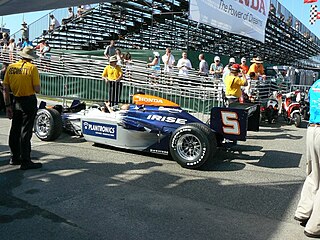 KV Racing Technology was an auto racing team that last competed in the IndyCar Series. The team was originally formed as PK Racing before the 2003 season by Australian businessman Kevin Kalkhoven and former Formula One team manager Craig Pollock from the remnants of the PacWest team.

Michael Dennis Groff is a former race car driver who competed in CART and the IRL IndyCar Series and was the 1989 Indy Lights champion. His younger brother Robbie was also a CART and IRL driver from 1994 to 1998.

The 84th Indianapolis 500 was held at the Indianapolis Motor Speedway in Speedway, Indiana on Sunday, May 28, 2000. After four years of an ongoing organizational dispute and "split" in Indy car racing, Chip Ganassi Racing became the first CART-based team to compete at the race since 1995.. The Ganassi team of Jimmy Vasser and Juan Pablo Montoya competed as a one-off entry, and were well received by fans and fellow competitors. Both drivers were quickly up to speed with the IRL regulars, and were expected to be favorites in both qualifying and on race day. Also making a heralded return to Indianapolis was two-time winner Al Unser Jr. who had switched full-time to the IRL in 2000.

Graham Robert Rahal is an American racecar driver. He currently participates in the IndyCar Series with Rahal Letterman Lanigan Racing, a team partially owned by his father Bobby Rahal, the winner of the 1986 Indianapolis 500.

Dale Coyne Racing (DCR) is an American professional open-wheel racing team that currently competes in the IndyCar Series. The team was founded in 1984 and is owned by former driver Dale Coyne. From 1995 to 2000, the team was known as Payton-Coyne Racing, reflecting a partnership with Chicago Bears great Walter Payton. After the 1988 season, Coyne stepped out of the cockpit and turned his talents to the tutelage of several up-and-coming drivers. Once known for competing on budgets far smaller than most of their competitors, the team earned its maiden victory after 25 years at Watkins Glen International in July 2009 with Justin Wilson.

The 1992 PPG Indy Car World Series season was the 14th national championship season of American open wheel racing sanctioned by CART. The season consisted of 16 races. Bobby Rahal was the national champion, his third career CART title. Stefan Johansson was named the Rookie of the Year. The 1992 Indianapolis 500 was sanctioned by USAC, but counted towards the CART points championship. Al Unser, Jr. won the Indy 500 in the closest finish in the history of that event.

The IndyCar Monterey Grand Prix or known as "Firestone Grand Prix of Monterey" due to sponsorship reason, is an IndyCar Series race held at WeatherTech Raceway Laguna Seca near Monterey, California. The event dates back to 1960, and became an American open wheel race beginning in 1983. The race was part of the CART/Champ Car series from 1983 through 2004. After a fifteen-year hiatus, the event returned in 2019 as part of the IndyCar Series, replacing Sonoma. 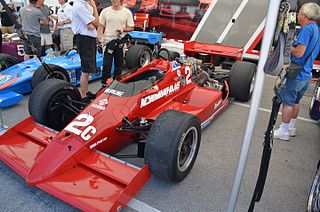 Newman/Haas Racing was an auto racing team that competed in the CART series and the IndyCar Series from 1983 to 2011. The team operations were based in Lincolnshire, Illinois. Newman/Haas Racing was formed as a partnership between actor, automotive enthusiast, and semi-professional racer Paul Newman and long-time auto racing impresario Carl Haas. The duo were competitors in sports car racing during the 1970s and early 1980s. In 1983, joined forces to enter the ranks of Indy car racing. Newman/Haas was one of the most successful teams in Indy car racing during the 1980s, 1990s, and 2000s. The team won 105 CART/Champ Car races and eight season championships.

The 1995 PPG Indy Car World Series season, the seventeenth in the CART era of U.S. open-wheel racing, consisted of 17 races, beginning in Miami, Florida on March 5 and concluding in Monterey, California on September 10. The PPG Indy Car World Series Drivers' Champion and Indianapolis 500 winner was Jacques Villeneuve. Rookie of the Year was Gil de Ferran. This was the last season before the formation of the Indy Racing League by Indianapolis Motor Speedway owner, Tony George, and the last time the USAC-sanctioned Indianapolis 500 would appear in the Series.