Trox is a genus of hide beetle in the subfamily Troginae. [1]

In recent years, scientists have revamped the taxonomy of Trox. The formerly massive genus, which boasted a whopping 160 species, has been cut down. Specifically, the subgenera Phoberus and Glyptotrox have been reelevated as their own separate genera, while various Trox species have been merged or otherwise combined. [2] 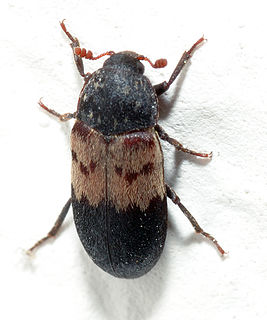 Dermestes is a genus of beetles in the family Dermestidae, the skin beetles. The genus is distributed worldwide.

Omorgus is a genus of beetles of the family Trogidae with about 140 species worldwide. Omorgus beetles are generally between 9 and 20 mm long.

Polynoncus is a genus of beetles of the Family Trogidae. It contains the following species:

Agabus is a large genus of predatory aquatic beetles in the family Dytiscidae, proposed in 1817 by William Elford Leach and named after Agabus, an early follower of Christianity. The adult beetles are moderate-sized, 5 to 14 mm long. The genus is primarily Holarctic in distribution, with only a few species known from the Afrotropical and Neotropical realms. Three species of Agabus, namely A. clypealis, A. discicollis and A. hozgargantae are endangered according to the IUCN Red List. The division into subgenera is not widely accepted. However, a number of species groups are recognized after the works of David J. Larson and Anders N. Nilsson. The genus is probably polyphyletic or paraphyletic. In a recent study of mitochondrial DNA, Agabus was found paraphyletic with respect to several of the species groups of Platambus, a closely related genus in the tribe Agabini. Lately the taxonomy of the genus has been revised, and some groups of species were transferred from Agabussensu stricto to other genera in the tribe Agabini.

Chrysolina is a large genus of leaf beetles in the subfamily Chrysomelinae. Most species are distributed in Europe, Asia and Africa with a small number of species inhabiting North America and introduced species in Australia.

Nabis is a genus of damsel bugs in the family Nabidae.

Caccobius is a genus of Scarabaeidae or scarab beetles.

Onthophagus is a genus of dung beetles in the Onthophagini tribe of the wider scarab beetle family, Scarabaeidae. It is the most species-rich and widespread genus in the subfamily Scarabaeinae, with a global distribution. 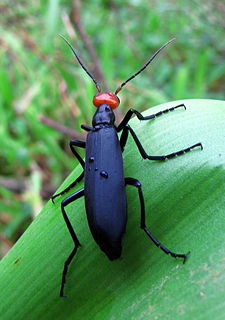 Epicauta is a genus of beetles in the blister beetle family, Meloidae. The genus was first scientifically described in 1834 by Pierre François Marie Auguste Dejean. Epicauta is distributed nearly worldwide, with species native to all continents except Australia and Antarctica. Surveys have found the genus to be particularly diverse in northern Arizona in the United States. Few species occur in the Arctic, with none farther north than the southern Northwest Territory of Canada.

Enochrus, a genus of water scavenger beetles, is the third-largest genus of hydrophilids with 222 species in six subgenera worldwide.

Lema is a genus of beetles in the family Chrysomelidae.

Chilothorax is a genus of scarab beetles in the family Scarabaeidae. There are more than 60 described species in Chilothorax, found in Europe, Asia, Africa, and North America.

Glyptotrox is a genus of hide beetle in the subfamily Troginae. It contains the following species:

Phoberus is a genus of hide beetle in the subfamily Troginae. It contains the following species:

Saprosites is a genus of scarab beetles in the family Scarabaeidae. There are more than 130 described species in Saprosites.