The War Damage Commission was a body set up by the British Government under the War Damage Act 1941 to pay compensation for war damage to land and buildings throughout the United Kingdom. It was not responsible for the repairs themselves, which were carried out by local authorities or private contractors. [1]

The Commission was chaired by Malcolm Trustram Eve, then by Sir Thomas Williams Phillips (1949–1959). It was headquartered at Devonshire House, Mayfair Place, Piccadilly, London, and operated out of sixteen Regional Offices:

Sir Thomas Williams Phillips was a senior official in the British Civil Service.

Devonshire House in Piccadilly was the London residence of the Dukes of Devonshire in the 18th and 19th centuries. Following a fire in 1733 it was rebuilt for William Cavendish, 3rd Duke of Devonshire, in the Palladian style, to designs by William Kent. Completed circa 1740, it stood empty after the First World War and was demolished in 1924.

Piccadilly is a road in the City of Westminster, London to the south of Mayfair, between Hyde Park Corner in the west and Piccadilly Circus in the east. It is part of the A4 road that connects central London to Hammersmith, Earl's Court, Heathrow Airport and the M4 motorway westward. St James's is to the south of the eastern section, while the western section is built up only on the northern side. Piccadilly is just under 1 mile (1.6 km) in length, and is one of the widest and straightest streets in central London. 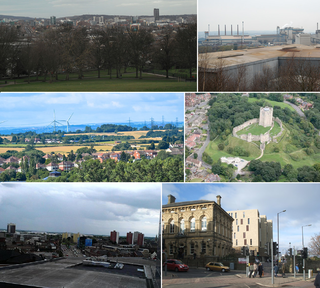 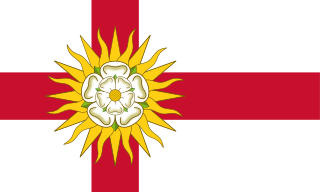 The Hull Barnsley & West Riding Junction Railway and Dock Company (HB&WRJR&DCo.) was opened on 20 July 1885. It had a total projected length of 66 miles but never reached Barnsley, stopping a few miles short at Stairfoot. The name was changed to The Hull and Barnsley Railway (H&BR) in 1905. Its Alexandra Dock in Hull opened 16 July 1885.

The regional policy of the European Union (EU), also referred as Cohesion Policy, is a policy with the stated aim of improving the economic well-being of regions in the EU and also to avoid regional disparities. More than one third of the EU's budget is devoted to this policy, which aims to remove economic, social and territorial disparities across the EU, restructure declining industrial areas and diversify rural areas which have declining agriculture. In doing so, EU regional policy is geared towards making regions more competitive, fostering economic growth and creating new jobs. The policy also has a role to play in wider challenges for the future, including climate change, energy supply and globalisation.

The Electricity Act, 2003 is an Act of the Parliament of India enacted to transform the power sector in India.

The Eastern Region was a region of British Railways from 1948, whose operating area could be identified from the dark blue signs and colour schemes that adorned its station and other railway buildings. Together with the North Eastern Region, it covered most lines of the former London and North Eastern Railway, except in Scotland. By 1988 the Eastern Region had been divided again into the Eastern Region and the new Anglia Region, with the boundary points being between Peterborough and Whittlesea, and between Royston and Meldreth. The region ceased to be an operating unit in its own right in the 1980s and was wound up at the end of 1992.

England is divided into a number of different regional schemes for various purposes. Since the creation of the Government Office Regions in 1994 and their adoption for statistical purposes in 1999, some historical regional schemes have become obsolete. However, many alternative regional designations also exist and continue to be widely used.

The York, Hull and East and West Yorkshire Junction Railway was a proposed railway line, promoted in the mid 1840s, intended to connect York to the East Riding of Yorkshire, England.