The AFC U-23 Championship (also known as the AFC U-23 Asian Cup) [1] is an international football tournament held by the Asian Football Confederation (AFC). The first edition was initially set to be held in 2013 and its qualification matches in 2012, but the finals tournament was postponed to be played in January 2014 due to the 2013 EAFF East Asian Cup. [2] [3]

The overview of the competition format in the 2016 tournament was as follows: [7]

In addition, players would be ineligible for participating in the AFC U-16 Championship if they participated in a higher age group competition (this tournament or the AFC U-19 Championship), though in reality it is rarely enforced. [7]

The AFC U-19 Championship, formerly known as the AFC Youth Championship, is a biennial international association football competition organised by the sport's Asian governing body, the Asian Football Confederation (AFC). The competition has been held since 1959. Between 1959 and 1978 the tournament was held annually, since 1980 it has been held every two years. 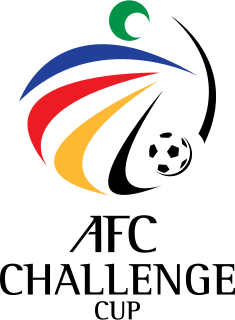 The AFC Challenge Cup was an international football competition for Asian Football Confederation (AFC) member countries that was categorized as "emerging countries" in the "Vision Asia" programme. "Vision Asia", created by former AFC president, Mohammed Bin Hammam, is the AFC's plan for a continent wide programme to raise the standards of Asian football at all levels. The AFC Challenge Cup, which reflected the philosophy of Vision Asia, was created for teams to experience playing in a continental competition with the possibility to win an AFC trophy and to potentially discover new talent.

The AFC U-20 Women's Championship, founded as the AFC U-19 Women's Championship, later changed to its current name after the 2019 edition, is an association football tournament for women's national teams under the age of 20. It is organised by the Asian Football Confederation every two years, and serves as a qualifying competition for the FIFA U-20 Women's World Cup. The AFC have agreed to the proposal for switching the tournament from under-19 to under-20 starting from 2022.

The OFC U-19 Championship is a tournament held once every two years to decide the under-19 champions of Oceania and also decides who will represent Oceania Football Confederation (OFC) at the biennial FIFA U-20 World Cup.

The Asian Football Confederation (AFC) section of the 2014 FIFA World Cup qualification saw 43 teams competing for 4 or 5 berths in the final tournament in Brazil. As in recent tournaments the AFC had four direct qualifiers for the finals tournament in addition to a further possible place via the intercontinental play-offs against CONMEBOL's fifth-placed team, which was chosen through a random draw, rather than being decided by FIFA beforehand as in previous tournaments. Iran and South Korea from Group A, along with Australia and Japan from Group B won the 4 direct qualification positions, with Jordan defeating Uzbekistan in a play-off to see which team would face the 5th placed CONMEBOL team, Uruguay, for a place in the World Cup, eventually also failed to qualify for the competition.

The 2011 CAF U-23 Championship was the first edition of the football tournament for players under 23 years. It was originally scheduled to be hosted by Egypt from 26 November to 10 December 2011. However, less than two months prior to the start of the tournament, Egyptian authorities decided against hosting the competition because of security concerns. On 13 October 2011, Morocco was chosen as the replacement to host the tournament. 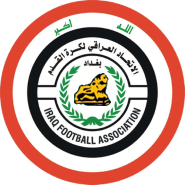 The association football tournament at the 2016 Summer Olympics was held from 3 to 20 August in Brazil.

The 2014 AFC Challenge Cup was the fifth and the final edition of the AFC Challenge Cup, an international football competition for Asian Football Confederation (AFC) member nations that are mainly categorized as "emerging countries" in the now defunct Vision Asia programme. It took place from 19 to 30 May 2014. The winner, Palestine, qualified to the 2015 AFC Asian Cup.

The Pakistan U-23 national football team is a youth football team operated under the Pakistan Football Federation. The team represented Pakistan at the Summer Olympics, AFC U-22 Asian Cup, and the Asian Games.

The 2020 AFC U-23 Championship was the 4th edition of the AFC U-23 Championship, the biennial international age-restricted football championship organised by the Asian Football Confederation (AFC) for the men's under-23 national teams of Asia. A total of 16 teams competed in the tournament. It took place between 8–26 January 2020 in Thailand.