Allahabad Fort is a fort built by the Mughal emperor Akbar at Allahabad, Uttar Pradesh, India in 1583. A stone inscription inside fort describe 1583 as a foundation year but this stone inscription related to ashok which was early period situated in kaushambi and taken from there to allahabad fort .The fort stands on the banks of the Yamuna near its confluence with the river Ganges. It is recognised by the Archaeological Survey of India as a monument of national importance. [1]

The Allahabad Fort was constructed by the Mughal Emperor Akbar in 1583. Abu'l-Fazl, in his Akbarnama writes: [2]

For a long time [Akbar's] desire was to found a great city in the town of Piyag [Prayag], where the rivers Ganges and Jamna join, and which is regarded by the people of India with much reverence, and which is a place of pilgrimage for the ascetics of that country, and to build a choice fort there.

Akbar named the fort Illahabas ("blessed by Allah"), which later became "Allahabad". [2] According to Catherine Asher, the construction of the fort was a response to several uprisings that had been taking place in eastern India. [3] Besides the strategic location of Allahabad, Akbar is also thought to have been motivated by the ability to collect taxes from the large number of pilgrims visiting the Triveni Sangam. However, this seems unlikely, considering the fact that Akbar abolished the existing pilgrim taxes in 1563. [4]

Akbar's fort was constructed in such a way that it enclosed the famous Akshayavat tree, where people would commit suicide in order to achieve salvation. The reason for this is not known, although some sources claim that he did it to prevent people from committing suicide. According to a local legend, Akbar was a Hindu ascetic named Mukunda Brahmachari in his previous birth. Once, by mistake, he consumed a cow's hair while drinking milk. Horrified at this sin (cow being a holy animal), he committed suicide. He was born a mlechchha (non-Hindu) as a result of this sin, and was driven to build a fort at the holy Sangam. [4]

The local Prayagwal Brahmins claim that Akbar repeatedly failed to construct the fort, because its foundation would sink in the sand each time. The emperor was told that a human sacrifice was required to proceed. A local Brahmin voluntarily sacrificed himself, and in return, Akbar granted his descendants — the Prayagwals — the exclusive rights of servicing the pilgrims at the Sangam. [4]

The Allahabad Fort is the largest fort built by Akbar. [5] This fort has three galleries flanked by high towers. As per historian William Finch, it took 5,000 to 20,000 workers of different denomination over a period of forty years to build the fort. [6]

In 1600, Mughal prince Salim (future emperor Jahangir) revolted against his father Akbar and established his own court in the Allahabad fort. He commanded very little territory and was reconciled with his father shortly after. [7]

The fort was first garrisoned by British East India Company troops in 1765 as part of the Treaty of Allahabad, signed after the Battle of Buxar by Commander-in-Chief of British India Robert Clive, Mughal Emperor Shah Alam II, and the ruler of Awadh, Nawab Shuja-ud-Daula. According to this treaty, the British garrison in the fort was to defend and protect Shah Alam, however, Shah Alam, finding this arrangement restrictive, slipped away to Delhi in 1772, where he attempted to cede Allahabad to the Maratha Empire. The British intervened and contrived to nullify Alam's claim to the fort, proclaiming Shuja-ud-Daula its sole owner. Shuja-ud-Daula died and was succeeded as Nawab of Awad by Asaf-ud-Daula in 1775; despite persistent attempts of the Company to formally acquire the fort, it remained in the Nawab's hands. Asaf-ud-Daula died in 1787, leaving large debts to the Company and an heir of disputed parentage, who was promptly deposed by Saadat Ali Khan I. Finally, in February 1798, a financially strapped Saadat Ali ceded the fort to the Company. Three years later, in 1801, Saadat Ali finally ceded the district of Allahabad to the British. Once Allahabad became a functional part of the East India Company's territories, its fort was established as the grand depot for military stores. [8] [9] 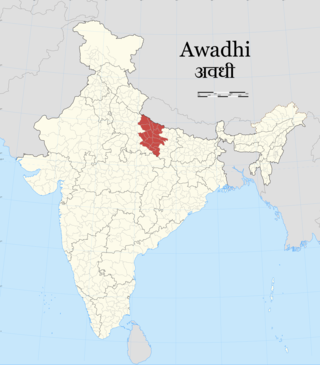 Awadh, known in British historical texts as Avadh or Oudh, is a historical region in northern India, now constituting the northeastern portion of Uttar Pradesh. It is roughly synonymous with the ancient Kosala region of Hindu, Buddhist, and Jain scriptures.

Faizabad is a city situated near the southern banks of Saryu river in Ayodhya district in the Indian state of Uttar Pradesh. The area of this Faizabad region is administered by Ayodhya Municipal Corporation. It was the headquarters of Faizabad district and Faizabad division until 6 November 2018, when the Uttar Pradesh cabinet headed by chief minister Yogi Adityanath approved the renaming of Faizabad district as Ayodhya district and Faizabad division as Ayodhya division. Faizabad is situated on the banks of river Saryu about 130 km east of state capital Lucknow. It was the first capital of the Nawabs of Awadh and has monuments built by the Nawabs, like the Tomb of Bahu Begum, Gulab Bari. 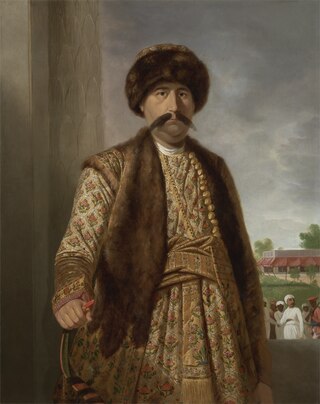 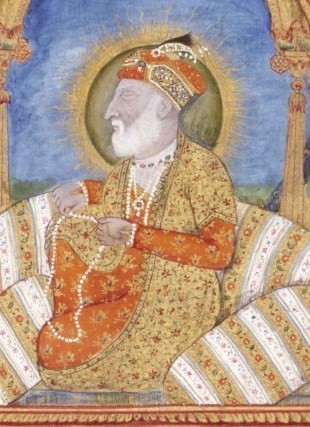 Shah Alam II, also known by his birth name Ali Gohar, was the seventeenth Mughal Emperor and the son of Alamgir II. Shah Alam II became the emperor of a crumbling Mughal empire. His power was so depleted during his reign that it led to a saying in the Persian language, Sultanat-e-Shah Alam, Az Dilli ta Palam, meaning, 'The empire of Shah Alam is from Delhi to Palam', Palam being a suburb of Delhi.

The Battle of Buxar was fought between 22 and 23 October 1764, between the forces under the command of the British East India Company, led by Hector Munro, and the combined armies of Mir Qasim, Nawab of Bengal till 1764; the Nawab of Awadh, Shuja-ud-Daula; and the Mughal Emperor, Shah Alam II. The battle was fought at Buxar, a "strong fortified town" within the territory of Bihar, located on the banks of the Gangas river about 130 kilometres (81 mi) west of Patna; it was a challenging victory for the British East India Company. The war was brought to an end by the Treaty of Allahabad in 1765.

Mirza Asaf-ud-Daula was the Nawab wazir of Oudh ratified by Shah Alam II, from 26 January 1775 to 21 September 1797, and the son of Shuja-ud-Dowlah. His mother and grandmother were the Begums of Oudh.

Najib ad-Dawlah, also known as Najib Khan Yousafzai, was a Rohilla Yousafzai Afghan who earlier served as a Mughal serviceman but later deserted the cause of the Mughals and joined Ahmed Shah Abdali in 1757 in his attack on Delhi. He was also a House chief of Rohilkhand, and in the 1740s founded the city of Najibabad in Bijnor district, India. He was instrumental in winning the Third Battle of Panipat.

The Treaty of Allahabad was signed on 12 August 1765, between the Mughal Emperor Shah Alam II, son of the late Emperor Alamgir II, and Robert Clive, of the East India Company, in the aftermath of the Battle of Buxar of 23 October 1764. The treaty was handwritten by I'tisam-ud-Din, a Bengali Muslim scribe and diplomat to the Mughal Empire. 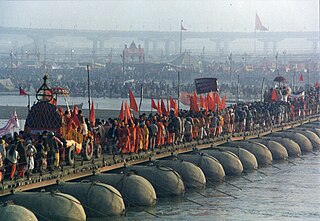 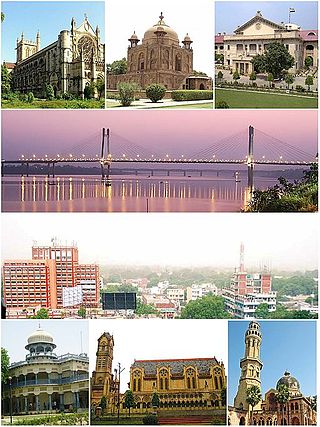 Allahabad, officially known as Prayagraj, also known as Ilahabad, is a metropolis in the Indian state of Uttar Pradesh. It is the administrative headquarters of the Allahabad district—the most populous district in the state and 13th most populous district in India—and the Allahabad division. The city is the judicial capital of Uttar Pradesh with the Allahabad High Court being the highest judicial body in the state. As of 2011, Allahabad is the seventh most populous city in the state, thirteenth in Northern India and thirty-sixth in India, with an estimated population of 1.53 million in the city. In 2011, it was ranked the world's 40th fastest-growing city. Allahabad, in 2016, was also ranked the third most liveable urban agglomeration in the state and sixteenth in the country. Hindi is the most widely spoken language in the city.

The Nawab of Awadh or the Nawab of Oudh was the title of the rulers who governed the state of Awadh in north India during the 18th and 19th centuries. The Nawabs of Awadh belonged to an Iranian dynasty of Sayyid origin from Nishapur, Iran. In 1724, Nawab Sa'adat Khan established the Oudh State with their capital in Faizabad and Lucknow. 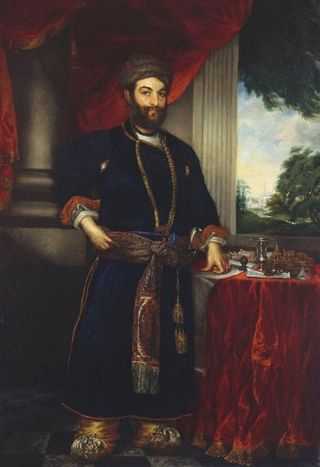 Yameen-ud Daula Saadat Ali Khan II Bahadur was the sixth Nawab of Oudh from 21 January 1798 to 11 July 1814, and the son of Shuja-ud-Daula. He was of Persian origin. 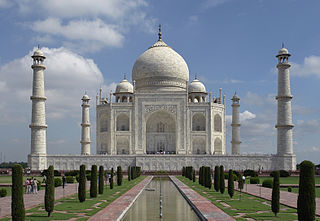 The Culture of Uttar Pradesh is an Indian culture which has its roots in Hindi and Urdu literature, music, fine arts, drama and cinema. Lucknow, the capital of Uttar Pradesh, has historical monuments including Bara Imambara and Chhota Imambara, and has preserved the damaged complex of the Oudh-period British Resident's quarters, which are being restored. 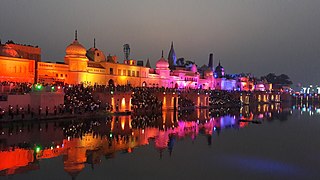 Situated in the northern part of India, bordering with the capital of India New Delhi, Uttar Pradesh is one of the most popular and an established tourist destination for both Indians and non-Indians alike in India. The most populous state of India, Uttar Pradesh contains many historical monuments and places of religious significance. Geographically, Uttar Pradesh is very diverse, with Himalayan foothills in the extreme north and the Gangetic Plain in the centre. It is also home of India's most visited sites, Hinduism's holiest city, Varanasi. Kumbh city, Prayagraj. Kathak, one of the eight forms of Indian classical dances, originated from Uttar Pradesh. Uttar Pradesh is at the heart of India, hence it is also known as The Heartland of India. Cuisine of Uttar Pradesh like Awadhi cuisine, Mughlai cuisine, Kumauni cuisine are very famous not only in India but also many places abroad and Pratapgarh is also famous for Rajputana.

Ghulam Husain Ali Khan aka Ghulam Hussainy or Umdat ul-Umra, was the Nawab of the Carnatic state in the Mughal Empire from 1795 to 1801. Local tradition holds Fyzabad or now Faizabad is identical with the Saket of the Ramayana, supposedly the private estate of King Dasharatha, father of Lord Rama. It is claimed that Saket was renamed after the death of Faiz Baksh, a courtier of the Nawab of Awadh. Historically, when Nawab Saadat Ali Khan, Burhan-ul-Mulk was given the charge of the Subah of Awadh around 1722 by the Mughal court, he settled on the banks of the river Ghaghara, building a fortress and mud barracks. Due to these temporary dwellings, the settlement was initially referred to as 'Bangla'. 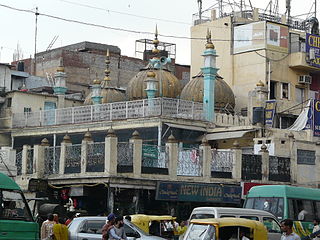 The Sunehri Masjid is an 18th-century mosque in Old Delhi. It was built by Mughal noble Roshan-ud-Daula, during the reign of Mughal Emperor Muhammad Shah. It is located near the Gurudwara Sis Ganj Sahib in Chandni Chowk, once an imperial boulevard leading to the Red Fort.

This is a timeline of the history of the city of Prayagraj, Uttar Pradesh, India.

The Oudh State was a princely state in the Awadh region of North India until its annexation by the British in 1856. The name Oudh, now obsolete, was once the anglicized name of the state, also written historically as Oudhe.

Bengal War, Campaign for the Eastern Subah's, was waged by the Mughal imperial crown Prince Ali Gauhar so as to recapture the Nawab of Bengal from the British East India Company. Hostilities began in 1756 and ended in 1765.