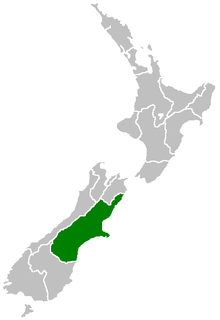 The Kaiapoi River is a minor river of north Canterbury, in New Zealand's South Island. Originally called the Cam River, it is a tributary of the Waimakariri River, which it joins at the larger river's estuary. The river is 16 kilometres (10 mi) long, and its drainage area is about 430 square kilometres (170 sq mi).

The Cam / Ruataniwha rises just to the east of the town of Rangiora and flows south across the Canterbury Plains towards Kaiapoi. [1] It has two named tributaries, North Brook and South Brook, both of which rise in Rangiora, plus several unnamed streams and drainage canals.

Rangiora is the largest town and seat of the Waimakariri District, in Canterbury, New Zealand. It is 29 kilometres (18 mi) north of Christchurch, and is considered a satellite town of the city. With a population of 18,300, Rangiora is the 25th largest urban area in New Zealand, and the fourth-largest in the Canterbury region.

The river's official name was changed from Cam River to the dual name Cam River / Ruataniwha by the Ngai Tahu Claims Settlement Act 1998. [2]

Ngāi Tahu, or Kāi Tahu, is the principal Māori iwi (tribe) of the southern region of New Zealand. Its takiwā is the largest in New Zealand, and extends from Blenheim, Mount Mahanga and Kahurangi Point in the north to Stewart Island in the south. The takiwā comprises 18 rūnanga corresponding to traditional settlements. 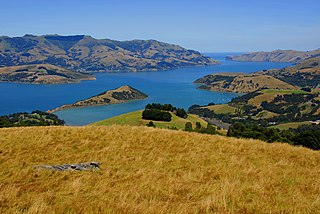 The Canterbury Plains is an area in New Zealand centred in the Mid Canterbury, to the south of the city of Christchurch in the Canterbury region. Their northern extremes are at the foot of the Hundalee Hills in the Hurunui District, and in the south they merge into the plains of North Otago beyond the Waitaki River.

The Heathcote River lies within the city boundaries of Christchurch, New Zealand, and is fed from springs near Templetons Road and also receives wet weather flows from as far west as Pound Road. It meanders around the base of the Port Hills from west to south-east. 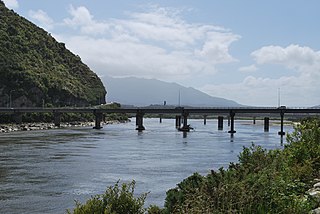 The Grey River / Māwheranui is located in the northwest of the South Island of New Zealand. It rises in Lake Christabel, one of numerous small lakes on the western side of the Southern Alps,12 kilometres southwest of the Lewis Pass, and runs westward for 120 kilometres before draining into the Tasman Sea at Greymouth. The river was named by explorer Thomas Brunner in honour of New Zealand politician Sir George Grey. The official name of the river was changed to Grey River / Māwheranui in 1998 by way of the Ngai Tahu Claims Settlement Act 1998. The Maori name for the river system and surrounding area is Māwhera, with Māwheranui being distinguished from the northern branch Little Grey River / Māwheraiti.

Waimakariri District is a local government district, located in the Canterbury region of New Zealand's South Island. It is named after the Waimakariri River, which forms the district's southern boundary, separating it from Christchurch City and the Selwyn District. It is bounded in the north by the Hurunui District and in the east by the Pacific Ocean.

Lyttelton Harbour / Whakaraupō is one of two major inlets in Banks Peninsula, on the coast of Canterbury, New Zealand; the other is Akaroa Harbour on the southern coast.

The Ōnawe Peninsula is a volcanic plug inside Akaroa Harbour, on Banks Peninsula in Canterbury, New Zealand.

Henare Whakatau Uru was a New Zealand politician. He was the Reform Party Member of Parliament for Southern Maori from 1922 to 1928.

The Cust River is a river in the Canterbury Region of New Zealand. It flows east across the upper Canterbury Plains from its source north of the town of Oxford, New Zealand, flowing into the Cam River / Ruataniwha close to the town of Rangiora. The small town of Cust lies on the banks of the river. The lower part of the river, to the south-west of Rangiora, is diverted into a channel and called the "Main Drain". The channel was built in 1862 to drain the swampy land between Rangiora and the Waimakariri River, and when it was enlarged in 1868 it accidentally captured the Cust. 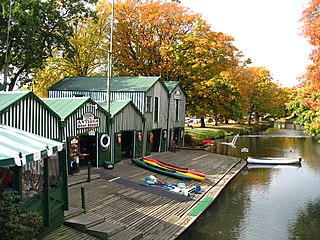 The Avon River / Ōtākaro flows through the centre of the city of Christchurch, New Zealand, and out to an estuary, which it shares with the Heathcote River, the Avon Heathcote Estuary.

The Estuary of the Heathcote and Avon Rivers / Ihutai is the largest semi-enclosed shallow estuary in Canterbury and remains one of New Zealand’s most important coastal wetlands. It is well known as an internationally important habitat for migratory birds, and it is an important recreational playground and educational resource. It was once highly valued for mahinga kai.

The New River / Kaimata is a river in the West Coast region of the South Island of New Zealand. It rises in the hills to the west of Lake Brunner and flows down the north edge of the floodplain of the Taramakau River then turns north for about 2 kilometres (1.2 mi) behind coastal dunes before meeting the Tasman Sea. There was much gold dredging activity around the river.

Mount Grey / Maukatere is a 934 metres (3,064 ft) mountain 15 kilometres (9.3 mi) west of Amberley in New Zealand. Mount Grey is named after Sir George Grey, the governor and Premier between 1845 and 1879. The Maori name for the mountain was Maukatere, which means "floating mountain", as they believed spirits of the dead left from the summit on the long journey to Cape Reinga. In 1998, as a result of the settling of the Ngai Tahu Treaty claim, the mountain officially became Mount Grey / Maukatere. 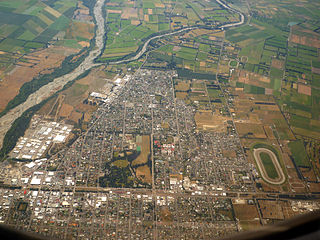 The Ashburton River / Hakatere is a river in the Canterbury Region of New Zealand, flowing across Mid Canterbury from the Southern Alps to the Pacific Ocean. The official name of the river was amended to become a dual name by the Ngai Tahu Claims Settlement Act 1998. It has been identified as an Important Bird Area by BirdLife International because it supports breeding colonies of the endangered black-billed gull. 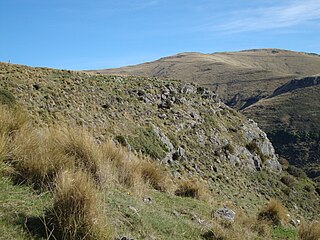 Mount Herbert / Te Ahu Pātiki is, at 919 metres (3,015 ft), the highest peak on Banks Peninsula, New Zealand. It is located south of Lyttelton Harbour and has the township of Diamond Harbour located at its northern foot.

Rapaki is a small settlement within the Whakaraupo Harbour basin.

Tuahiwi is a small New Zealand settlement located between Woodend and Rangiora. It is 6 kilometres (3.7 mi) north of Kaiapoi.