Before 1970, Embilipitiya was one of the areas where there were poor education facilities. However, Embilipitiya eventually got better schools. Embilipitiya Central College is the only school in Sabaragamuwa and Southern Sri Lanka where there is a swimming pool. Newly established Embilipitiya Technical College brought new hopes to school leavers in the area. [ Due to the rapid development of the education network in the area, Embilipitiya produced highly skilled and educated people. Thousands of doctors, engineers, lawyers, post graduate scientists, university professors and also reputed sportsmen and sportswomen hail from Embilipitiya.

Embilipitya has branches of almost all private and public banks and also the town is served by number of supermarket chains.

The Economic Centre [2] and the international leaders' training center are key institutions in Embilipitiya. The recently established Embilipitya modern town hall is a major achievement in the area. Public and private institutes aim to help people engaged in the small-scale food processing sector to develop relevant skills and technology, and to increase their access to information which will contribute towards helping them gain control of their livelihoods and communities.

The Sabaragamuwa Province is one of the nine provinces of Sri Lanka, the first level administrative division of the country. The provinces have existed since the 19th century but did not have any legal status until 1987 when the 13th Amendment to the Constitution of Sri Lanka established provincial councils. The Sabaragamuwa Province contains two districts: Ratnapura and Kegalle. It is named after its former indigenous inhabitants, namely the Sabara, an indic term for hunter-gatherer tribes, a term seldom used in ancient Sri Lanka. Sabaragamuwa University is in Belihuloya. 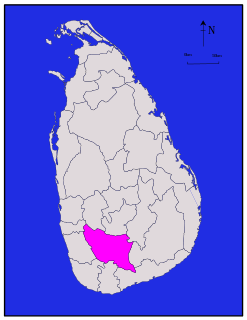 Ratnapura is a district of Sri Lanka in the Sabaragamuwa Province. 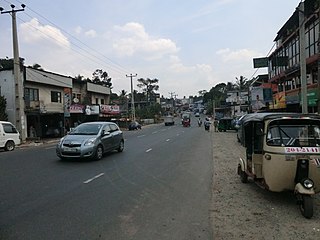 Clifford Senaka Ratwatte was a Sri Lankan politician. He was a former Parliamentary Secretary to the Minister of Agriculture, Food, Co-operatives and Fisheries in 1964 Member of Parliament for Balangoda, Chairman of the State Plantations Corporation and the Sri Lanka Tea Board.

Eheliyagoda is a town in Ratnapura District, Sabaragamuwa Province, Sri Lanka. It is located approximately 47 km (29 mi) east of Colombo.