Ambalangoda is a coastal town located in Galle District, Southern Province of Sri Lanka. Governed by Ambalangoda Urban Council, the town is famous for its ancient demon masks and devil dancers. [2] Situated approximately 107 kilometres (66 mi) south of Colombo, it sits on an elevation of 13 metres (43 ft) above the sea level.

Some of the schools situated in Ambalangoda are listed below:

Owing to the abundance of cinnamon in its hinterlands, Ambalangoda was the site of a Dutch East India Company outpost in the 18th century. Consisting of a rest-house (now demolished) and a court building on a small bluff overlooking the beach, it served as the residence for the local Dutch magistrate and dignitaries traveling to Galle and Colombo. British Military Governor Frederick North is reported to have spent a night at the rest house during his tour around Ceylon in 1803. [3] Simon Casie Chitty, in his Ceylon Gazetteer in 1833, gives the following account;

Amblangodde, a considerable village, rest house, and post station, about 15 miles south of Bentotte, and 19 north of Galle. It has a great number of houses covered with tiles, and is larger than most of the villages in this part of the country, and was once the station of a magistrate. The inhabitants are exclusively fishermen, and a great portion of them are engaged in a coasting trade between the island and the coast of Coromandel. Here there is a remarkably splendid Wihare, as well as a school belonging to the Wesleyan missionaries.

In his travel guide Book of Ceylon in 1907, Henry William Cave describes Ambalangoda as "a pleasant seaside place where good accommodation and excellent food can be obtained, and where the rare luxury of bathing in the open sea can be enjoyed in perfect security". The rest house, said to have been a comfortable hostelry consisting of eight bedrooms, [4] was razed by an act of a local politician in 2009. [5] The courthouse survives to date.

The town is renowned for the manufacture of wooden masks and puppets. [6] The traditional masks are carved from light Balsa like Kaduru wood (Nux vomica). Kaduru trees grow in the marshy lands bordering paddy fields. The wood is smoke dried for a week in preparation. The hand carved and hand painted masks in traditional dance dramas are both vibrant and colorful.

Masks are created for three different types of dancing rituals: 'Kolam', which tell mocking stories of traditional Sri Lankan colonial life; 'Sanni', or devil dancing masks, used in a type of exorcism ceremony to heal people of persisting illnesses believed to be inflicted by demons; and 'Raksha' masks, which are used in festivals and processions. Local puppet shows, showing dramas, comedies and folk tales were also a popular form of entertainment. Influences from South India, Asia and Europe are assumed to have been the shaping factor in the art of mask dancing and puppetry. [7] The Naga Raksha (Cobra demon) mask of the 'Raksha Kolama' (demon dance), consists of a ferocious face with bulging, popping & staring eyes, a carnivorous tongue lolling out of a wide mouth armed to the hilt with set of fanged teeth, all topped by a set of cobra hoods. [8]

With the practices of traditional exorcism (thovil), mask dancing (kolam) and puppetry (rookada) shows in the decline, the art of mask carving has seen a reduction of interest. Though only a few of the antique originals survive, the local mask museum retains an interesting collection of reproductions and provides displays of carving techniques for visitors.

Ambalangoda has maintained a strong attachment towards seafood from its long standing affiliation with the fishing industry. The local specialties, most of which consist of spiced dishes of fish, include;

Unawatuna is a coastal town in Galle district of Sri Lanka. Unawatuna is a major tourist attraction in Sri Lanka and known for its beach and corals. It is a suburb of Galle, about 5 kilometres (3.1 mi) southeast to the city center and approximately 108 kilometres (67 mi) south of Colombo. Unawatuna is situated at an elevation of 5 metres (16 ft) above the sea level. Despite significant development in the last decade it is still home to the endangered and endemic purple-faced langur, an usually shy monkey species that can only be found in Sri Lanka's forests.

Bambalapitiya is a southern coastal neighbourhood of Colombo, Sri Lanka. 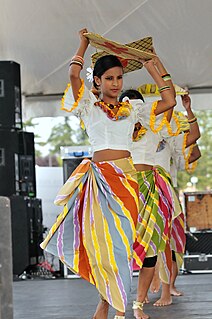 There are several styles of classical and folk dance in Sri Lanka. 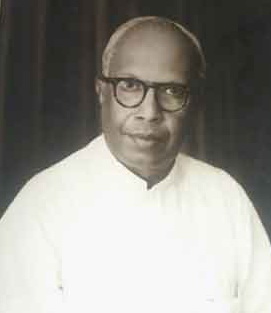 Patrick de Silva Kularatne was Sri Lankan educationist and politician. He was a Member of the State Council of Ceylon (1942-1947) and Member of Parliament (1960-1965). He served as Principal of Ananda College and Dharmaraja College and established Nalanda College Colombo, Ananda Balika Vidyalaya, Moratuwa Vidyalaya and Dharmapala Vidyalaya.

Maha Sona or Maha Sohona is a yaka in Sinhalese folklore, who is said to haunt afterlife. The name Maha Sona means " the greatest demon" or "god or demon of the cemetery" in the Sinhala language. It is the most feared god or demon in Sri Lanka. Originally a giant who had been defeated and decapitated in a duel by another giant named Gotaimbara, Maha Sonaa has had his head replaced with that of a bear or tiger. He is believed to kill people by crushing their shoulders and also by afflicting illnesses. Traditional exorcism rituals are performed to repel the demon in such cases. Sri Lanka Army's Long Range Reconnaissance Patrol units are popularly known as the "Maha Sohon Brigade", named after this demon.

Samudra Devi is a daily passenger train in Sri Lanka, operated by Sri Lanka Railways. The train runs on the Coastal line, from Galle to Maradana in the morning, and the return service is in the evening. 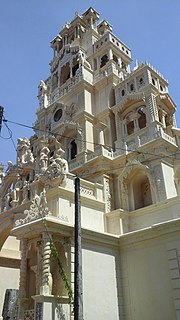 Sunandarama Maha Vihara, also known as Maha pansala is located in Southern part of, Sri Lanka. It's situated 65 kilometers north of Colombo, 36 kilometers south of Galle and 200 meters East from Ambalangoda railway station. This sacred place holds a land of nearly 5 acres. Traditionally this "Vihara" belongs to "Vilegoda","Nambimulla","Maha Ambalangoda" and "Paniyanduwa" which are known as "Sathara peruwa" .Since early days these states have been provided the support to maintanin the Vihara. Early before this place became a vicar, it's known that "Ganninanselaya" stayed here.

Rajarata Rejini is a daytime passenger train that runs between Vavuniya and Matara via Colombo Fort in Sri Lanka.