Peliyagoda is a town in the Western Province of Sri Lanka, lying mostly on the north shore of the Kelani River. [1] As of 2001 it had an estimated population of 29,880. The Airport Expressway's entry point and the Toll Plaza starts from the Peliyagoda section of the highway.

Wansapurna Dewage David alias Gongalegoda Banda was the leader of the Matale rebellion in 1848, pretender to the throne of Kandy and a national hero of Sri Lanka.

Sri Dharmaloka College is a national school in the Western province of Sri Lanka, situated near the Kelaniya Temple. The school was established in 1938 at the premises of Vidyalankara Pirivena. In the 1950s, the college moved to its current location on the Kelaniya premises.

The A 1 road is an A-Grade trunk road in Sri Lanka. It connects the capital city of Colombo with Kandy.

Vidyalankara Pirivena is one of the largest Buddhist pirivenas in Sri Lanka. Located in Peliyagoda, it is nearly 150 years old. Under the pirivena's leadership, several schools were started in the region; one is Sri Dharmaloka College, one of the national schools in the region. Vidyalankara Pirivena was founded on November 1, 1875 by Venerable Ratmalane Sri Dharmaloka Thera.

Kelani River-Peliyagoda Waterdrome, also called Sri Lankan Waterdrome is an open water aerodrome facility for use by seaplanes on the Kelani River, in the Peliyagoda suburb of Colombo, Sri Lanka 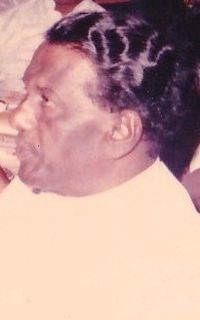 Deshamanya Hewa Komanage Dharmadasa, known as Navaloka Mudalali, was a business magnate, philanthropist and chairman of the Navaloka Group of companies. It is one of the leading private sector organizations in Sri Lanka. He was a renowned philanthropist and the Nawaloka Hospital was his brainchild in the health sector.

Lotus Tower, also referred to as Colombo Lotus Tower, is a tower of 350 m (1,150 ft), located in Colombo, Sri Lanka. It also reflects the symbolic landmark of Sri Lanka. As of 16 September 2019, the tower is currently the tallest self-supported structure in South Asia. It is also the second tallest structure in South Asia after the guy-wire-supported INS Kattabomman in India. The tower is also the 11th tallest completed tower in Asia and it is also the 19th tallest tower in the world. It was first proposed to be built in the suburb of Peliyagoda but later the Government of Sri Lanka decided to shift the location. The lotus-shaped tower will be used for communication, observation and other leisure facilities, with construction costing $104.3 million, funded by EXIM Bank of People's Republic of China. It is visible throughout Colombo, its suburbs and most major highways radiating from and around the city. 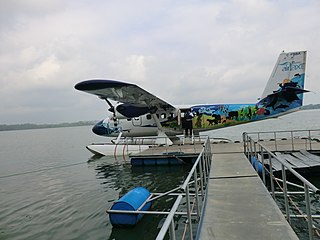 SriLankan Air Taxi was the domestic branch of SriLankan Airlines. The airline flew to destinations across Sri Lanka and had its hub at the waterdrome at Peliyagoda, on the Kelani River.

Henry Woodward Amarasuriya was a Ceylonese plantation owner, politician, educationist and philanthropist. He was the Cabinet Minister for Trade and Commerce in the cabinet of D. S. Senanayake. A former member of the Ceylon state council, H. W. Amarasuriya was a founding member and the first general secretary of the United National Party. He also held the position of Deputy Speaker and Chairman of Committees in the first parliament of Ceylon. A member of the first Education Executive Committee of the state council and a former general manager of the Buddhist schools, he did a great service to improve the education in Ceylon.

The A3 Highway is an A-Grade trunk road in Sri Lanka. It connects the Peliyagoda with Negombo-Puttalam.