Kattankudy (Tamil : காத்தான்குடி, Sinhala : කාත්තාන්කුඩි; also transliterated as "Kathankudy") is a township near the city of Batticaloa on the eastern coast of Sri Lanka. The town is predominately populated by Muslims. [1]

Most of the people are engaged in business, industries and fisheries. The division of Kattankudy occupies the central part of the district. It covers land area of approximately 2.56 km2 (0.99 sq mi) and 1.33 km2 (0.51 sq mi) of inland waterways, the division accounts for 0.15% of the district's total land area. [2] [3]

Kattankudy is one of the many Moorish(Muslims)-dominated towns in Sri Lanka. [ citation needed ]

Kattankudy Mosque Massacre was the killing of over 147 Muslim men and boys in a Mosque in Kattankudy by armed persons on 3 August 1990. It took place when around 30 armed persons raided four mosques in the town of Kattankudy, where over 300 people were prostrating in Isha prayers. The attack is attributed to LTTE by the Sri Lankan Government, although the former denied their involvement in the massacre, and have never retracted that denial. The initial report put the death toll at around 100, but as many of the injured who were rushed to hospital succumbed to their injuries, the final death toll rose to over 147. [4]

When the 2004 tsunami hit, approximately 108 people died in Kattankudy and 93 persons are still listed as missing. Around 2,500 houses were damaged by the tsunami in Kattankudy. [5] [6]

Seyed Ali Zahir Moulana is a Sri Lankan politician, former diplomat and local government activist. He is most known for the pivotal and important role he played in bringing about an end to the Sri Lankan Civil War.

The Kattankudy Mosque Massacre was the killing of over 147 Muslim men and boys on 3 August, 1990. Around 30 armed Tamil militants raided four mosques in Kattankudy where over 300 people were prostrating in Isha prayers. The Sri Lankan government, survivors, and observers accuse the Liberation Tigers of Tamil Eelam (LTTE) of committing the crime. The LTTE denied involvement and never retracted the denial.

Akkaraipattu is a large town in the Ampara District, Eastern Province, Sri Lanka. The town is strategically located with links via the Siyambalanduwa-Ampara Road (A25) and the Colombo-Batticaloa highway (A4). Akkaraipattu is situated 441 km (274 mi) from Colombo.

Kahatowita is one of the villages in the Attanagalla electorate, Gampaha District, Western Province, Sri Lanka.

Eppawala, is a settlement and Grama Niladhari administrative division in North Central Province, Sri Lanka. It forms part of the Thalawa Divisional Secretariat within the Anuradhapura District. It is situated around 20 kilometres (12 mi) south of the ancient city of Anuradhapura and 150 kilometres (93 mi) north east of Sri Lankan capital Colombo. 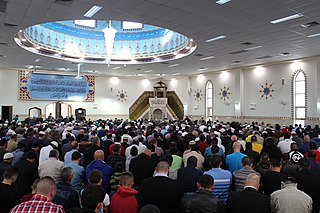 Ameer Ali is the former President of the Australian Federation of Islamic Councils, an umbrella group for various Islamic groups or councils in Australia. In 2006, he was the chairman of the Australian Muslim Community Reference Group, which was an advisory body to the federal government from mid-2005 to mid-2006.

National Tawahujja Jama'ath is a Sri Lankan Islamic terrorist jihadist group implicated in the 2019 Sri Lanka Easter bombings. It is believed to have ties to the Islamic State (ISIL). President of Sri Lanka Maithripala Sirisena banned National Thowheed Jamath on 27 April 2019 and designated it as a terrorist organisation along with Jammiyathul Millathu Ibrahim.

The Sri Lankan anti-Muslim riots were a series of religiously motivated riots targeting Muslims in Sri Lanka. The riots originated as isolated incidents in the aftermath of the Easter bombings in the nation, beginning in Chilaw and subsequently spreading to much of the Northwestern Province.