It is unknown which name ancient Iberians gave to the weapon. Contrary to popular belief, falcata is neither a native name nor one used in classical sources, but a 19th century term coined by historian Fernando Fulgosio to describe the shape of its blade. The term derivates from Latin falcatus, meaning literally "falcon-shaped". [1] [2] Classical vocabulary did have a sword named ensis falcatus, but it was apparently meant to be either a falx or a harpe. In any case, the name caught on very quickly and is now firmly entrenched in the scholarly literature.

The falcata has a single-edged blade that pitches forward towards the point, the edge being concave near the hilt, but convex near the point. This shape distributes the weight in such a way that the falcata is capable of delivering a blow with the momentum of an axe, while maintaining the longer cutting edge of a sword and some facility to execute a thrust. The grip is typically hook-shaped, the end often stylized in the shape of a horse or a bird. There is often a thin chain connecting the hooked butt of the Iberian with the hilt. Although usually a single-edged weapon, double-edged falcatas have been found.[ citation needed ]

The falcata was derived from the sickle-shaped knives of the Iron Age; that too explains their ritual uses.[ clarification needed ] It is thought to have been introduced in the Iberian Peninsula by the Celts who introduced iron working there. There are several historians[ who? ] who believe that its origin is parallel to the Greek kopis and is not derived from it. Meanwhile, others believe the design was carried over from Greece via merchants and traders. [3]

Roman armies in the Second Punic War and later, during the Conquest of Hispania, were surprised by the quality of the weapons used by Iberian mercenaries and warriors. The overall quality of the falcata came not only from the shape, but also from the quality of the iron. It is said that steel plates were buried in the ground for two to three years, corroding the weaker steel from them, but this is technically nonsensical as the higher carbon content of the 'better' steel makes it more vulnerable to chemical attacks (= corrosion). The technique of joining layers of steel in a fire-welding process in a forge was a standard procedure. [4]

In the early times of the tribes in Iberia, its use was more ornamental and liturgical than military. Highly decorated falcata have been found in tombs, for example the Falcata de Almedinilla. The scarcity of the falcata during early times was due to the expense and scarcity of iron in the region.

Since "falcata" is not a term used in Classical Latin, it is difficult to tell when, or even if, it is being referred to in ancient literature. There is, however, one passage that is generally agreed to refer to this type of sword, in Seneca's De Beneficiis 5.24:

A veteran who had been a bit too rough with his neighbors was pleading his case before Julius Caesar. "Do you remember," he said, "Imperator, how you twisted your ankle near Sucro?" When Caesar said he did remember: "Then you certainly remember that when you were lying to rest under a tree that was casting just a tiny shadow, in a very tough terrain with just that one lonely tree sticking out, one of your men laid out his cloak for you?" Caesar said "Why shouldn't I remember, even if I was exhausted? Because I was unable to walk I couldn't go to the nearby spring, and I would have been willing to crawl there on hands and knees, if it were not for a good soldier, a brave industrious chap, hadn't brought me water in his helmet?" to which the man replied, "Then, Imperator, you could recognize that man, or that helmet?" Caesar answered that he couldn't recognize the helmet, but certainly the man, and added, a bit irritated I think, "And you certainly are not him!" "It's not surprising," said the man, "that you do not recognize me, Caesar; for when that happened I was whole. Afterwards, at Munda my eye was gouged out, and my skull smashed in. Nor would you recognize that helmet if you saw it: it was split by a Hispanian sword (machaera Hispana)."

Polybius also calls Iberian swords machaera, possibly referring to the falcata given its similarities to the Greek makhaira. [2] However, he also employs this name for the straight swords used by the Gauls and even the Romans themselves. [5] The additional fact that other tribes from Hispania also used straight swords, which were later to inspire the Roman gladius, obscures the differentiation of their respective names. [6] 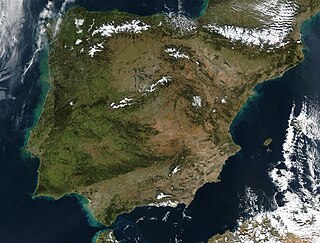 The Iberian Peninsula, also known as Iberia, is a peninsula in the southwest corner of Europe, defining the westernmost edge of Eurasia. It is principally divided between Spain and Portugal, comprising most of their territory, as well as a small area of Southern France, Andorra and the British overseas territory of Gibraltar. With an area of approximately 583,254 square kilometres (225,196 sq mi), and a population of roughly 53 million, it is the second largest European peninsula by area, after the Scandinavian Peninsula.

Gladius is a Latin word meaning "sword", but in its narrow sense, it refers to the sword of Ancient Roman foot soldiers. Early ancient Roman swords were similar to those of the Greeks, called xiphe. From the 3rd century BC, however, the Romans adopted a sword based on the one used by the Celtiberians in Hispania late into the Punic Wars, known in Latin as the gladius hispaniensis, or "Hispanic sword". 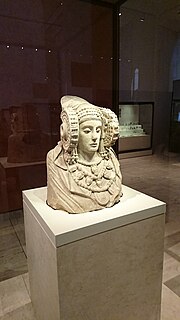 The Lusitanians were an Indo-European people living in the west of the Iberian Peninsula prior to its conquest by the Roman Republic and the subsequent incorporation of the territory into the Roman province of Lusitania.

The Iberian language was the language of an indigenous western European people identified by Greek and Roman sources who lived in the eastern and southeastern regions of the Iberian Peninsula in the pre-Migration Era. The ancient Iberians can be identified as a rather nebulous local culture between the 7th and 1st century BC. The Iberian language, like all the other Paleohispanic languages except Basque, became extinct by the 1st to 2nd centuries AD, after being gradually replaced by Latin due to the Roman conquest of the Iberian Peninsula. 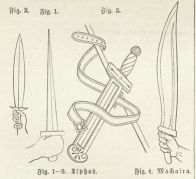 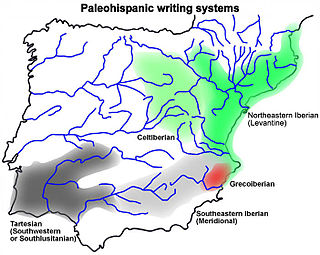 The Iberian scripts are the Paleohispanic scripts that were used to represent the extinct Iberian language. Most of them are typologically very unusual in that they are semi-syllabic rather than purely alphabetic. The oldest Iberian inscriptions date to the 4th or possibly the 5th century BCE, and the latest from end of the 1st century BCE or possibly the beginning of the 1st century CE. 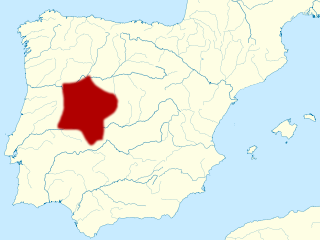 The Vettones were a pre-Roman people of the Iberian Peninsula of possibly Celtic ethnicity. 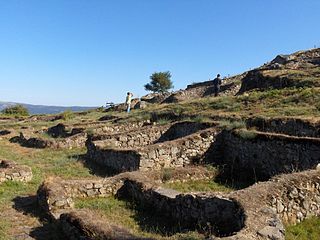 The Coelerni were an ancient Celtic tribe of Gallaecia in Hispania, part of Calaician or Gallaeci people, living in what was to become the Roman Province of Hispania Tarraconensis, in what is now the southern part of the province of Ourense. 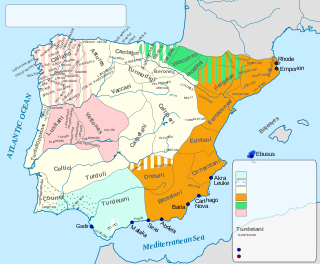 The Bastetani or Bastuli were an ancient Iberian (pre-Roman) people of the Iberian peninsula. They are believed to have spoken the Iberian language. The relationship between the Iberian Bastetani and the Tartessian Mastieni is not entirely clear. 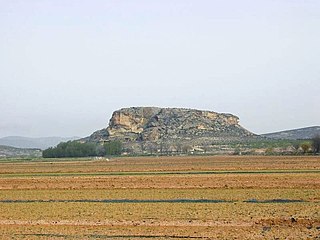 The Contestani were an ancient Iberian (Pre-Roman) people of the Iberian peninsula. They are believed to have spoken the Iberian language. 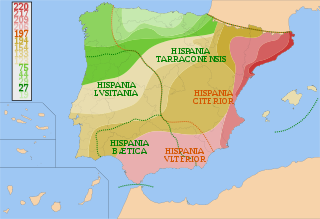 Hispania was the Roman name for the Iberian Peninsula and its provinces. Under the Roman Republic, Hispania was divided into two provinces: Hispania Citerior and Hispania Ulterior. During the Principate, Hispania Ulterior was divided into two new provinces, Baetica and Lusitania, while Hispania Citerior was renamed Hispania Tarraconensis. Subsequently, the western part of Tarraconensis was split off, first as Hispania Nova, later renamed "Callaecia". From Diocletian's Tetrarchy onwards, the south of remaining Tarraconensis was again split off as Carthaginensis, and probably then too the Balearic Islands and all the resulting provinces formed one civil diocese under the vicarius for the Hispaniae. The name Hispania was also used in the period of Visigothic rule. 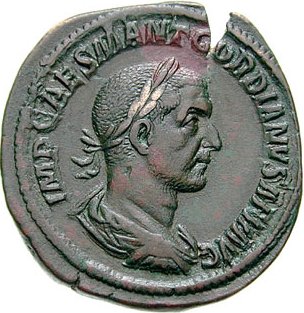 The economy of Hispania, or Roman Iberia, experienced a strong revolution during and after the conquest of the peninsular territory by Rome, in such a way that, from an unknown but promising land, it came to be one of the most valuable acquisitions of both the Republic and Empire and a basic pillar that sustained the rise of Rome.

The history of ancient Iberian coinage begins as early as the fifth century BC, but widespread minting and circulation in the Iberian peninsula did not begin until late in the third century, during the Second Punic War. Civic coinages - emissions made by individual cities at their own volition - continued under the first two and a half centuries of Roman control until ending in the mid-first century AD. Some non-civic coins were minted on behalf of Roman emperors during this period and continued to be minted after the cessation of the civic coinages. After the cessation of the civic coinages, these Imperial coins were the only coins minted in Iberia until the coins of the Suebi and Visigoths.

The Caetrati were a type of light infantry in ancient Iberia who often fought as skirmishers. They were armed with a caetra shield, swords, and javelins.

Warfare in ancient Iberian peninsula occupied an important place in historical chronicles, first during the Carthaginian invasion of Hispania, including the Punic Wars, and later during the Roman conquest of the peninsula. The densely bellicose character of the Pre-Roman peoples who inhabited Hispania was repeatedly shown in their conflicts against Rome, Carthage and each other. 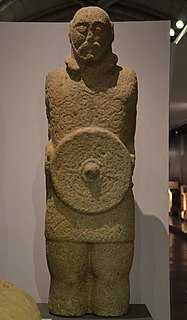 Mercenary life is recorded as a custom of Iron Age Spain, particularly in the central area of the Iberian peninsula. Departing from the native tribe and applying to serve in others was a way for economically disadvantaged youth to escape poverty and find an opportunity to use their fighting skills. Starting from 5th century BC, mercenary life would become a true social phenom in Hispania, with great numbers of fighters from distant lands coming to join the armies of Carthage, Rome, Sicily and even Greece, as well as other Spanish peoples.

Human sacrifice in the ancient Iberian Peninsula is recorded in classical sources, which give it as a custom of Lusitanians and other Celtic peoples from the northern area of the peninsula. Its most complete mention comes from the work of Greek chronicler Strabo, in which those ceremonies have a divinatory utility. Modern authors have seen in this phenomenon hints of a possible priestly class among the mentioned peoples, similar to but differentiated from European Celtic druids.