The sica was a short sword or large dagger of ancient Thracians, Dacians and Illyrians, used in Ancient Rome too, originating in the Halstatt culture. It was originally depicted as a curved sword (see the Zliten mosaic as well as numerous oil lamps) and many examples have been found in what are today Albania, Bosnia and Herzegovina, Bulgaria, Serbia and Romania. It is also depicted on Trajan's Column; notably the Dacian king Decebalus is depicted committing suicide with one.

From a typological point of view, though there is a strong tendency towards standardization, the sica daggers can be organised in three main types that differ only by morphological aspects, not functional.

The first type is characterized by its solidity, sometimes with a broken figure immediately after the blade's middle part, with a short and sharp point, with a slight curvature, a short handle cane, usually of a triangular shape, that has a hole for the fixing rivet, close to the blade. The blade has incised ornaments and a fuller deeply carved into it. These characteristics are not general, the only standing arguments for this type being the size and the shape approximately similar. [5]

The second type, not very different morphologically speaking, does not have the solid shape of the first type, but a longer blade, with a fuller, and keeps, most often, the haft's tongue short and of a triangular shape. [5]

The third type, more numerous, gathers a series of daggers characterized by a long blade, elegantly manufactured in most cases, by the ornamentation with incised circles and/or lines along the blade, the presence of the fuller, the haft's tongue as long as the haft and a guard muff. These distinctive elements are found either all together, or some of the pieces present one or more of these characteristic features. The sizes show a relative standardization, somewhere around 30–40 cm length and approximately 3 cm width. From a chronological point of view, this type of dagger is dated mostly in the 2nd and 1st centuries BC. [5]

The distinctive shape was designed to get around the sides of an opponent's shield, and stab or slash them in the back. Since the thraex gladiator's usual opponent was the scutum (large shield) carrying murmillo gladiator, such a weapon as the sica was necessary to make the duel more even and exciting.[ citation needed ]

The daggers’ decoration, remarkably complex, offers them a sum of spiritual, artistically and symbolical valences. On the blade geometrical shapes were incised, but also eagles and snakes, in which case their schematization requires the existence of a certain "code", or they were an emblem that underlined the membership of a certain brotherhood at arms or a certain social status, as well possible to have a mystical/magical component included. [5]

From the facts presented above, it can be stated that the sica dagger represents an important historical artifact which, due to its importance and the role it played in the Thracian world, contributes to the understanding of the social and military mechanisms of this society and, through the special spiritual dimension, to the reception of a new side from the religious mosaic of this people. From all the curved weapons used in the Thracian area, the sica daggers are the only ones that make the connection between the Southern Thracians and the Thracians North to the Danube, being spread the same on both sides of the river. [5]

The Romans regarded the sica as a distinctive Illyrian weapon. The principal melee weapon of the Illyrians was the Sica. [6] According to historian John Wilkes: [7] 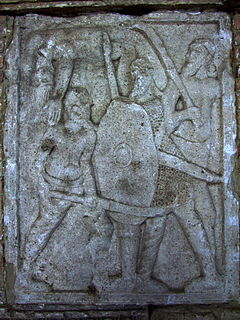 Protochronism is a Romanian term describing the tendency to ascribe, largely relying on questionable data and subjective interpretation, an idealized past to the country as a whole. While particularly prevalent during the regime of Nicolae Ceaușescu, its origin in Romanian scholarship dates back more than a century. 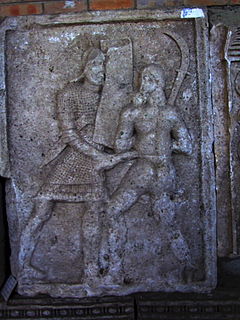 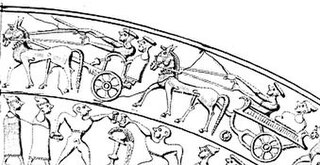 Illyrian weaponry played an important role in the makeup of Illyrian armies and in conflicts involving the Illyrians. Of all the ancients sources the most important and abundant writings are those of Ennius, a Roman poet of Messapian origin. Weapons of all sorts were also placed intact in the graves of Illyrian warriors and provide a detailed picture for archaeologists on the distribution and development of Illyrian weaponry. 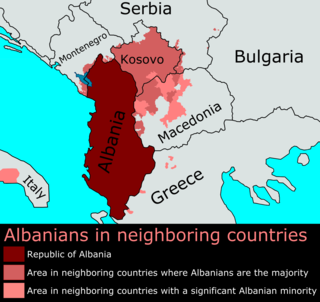 The Albanian–Romanian linguistic relationship is a field of the research of the ethnogenesis of both peoples. The common phonological, morphological and syntactical features of the two languages have been studied for more than a century. Both languages are part of the Balkan sprachbund but there are certain elements shared only by Albanian and Romanian. Aside from Latin, and from shared Greek, Slavic and Turkish elements, other characteristics and words are attributed to the Paleo-Balkan linguistic base: Illyrian, Thracian, Dacian and/or Thraco-Illyrian, Daco-Thracian.

Sorin Paliga is a Romanian linguist and politician. He is a university professor at the University of Bucharest. As a politician, he was the former mayor of Sector 3 of Bucharest from June 1996 to June 2000, and was affiliated with the National Liberal Party (PNL).