Last updated March 15, 2021
This article is about a type of cutting tool. For information on the Tibetan region of Golok, see Golog Tibetan Autonomous Prefecture. For Abode of Krishna, see Goloka.
Type of Machete

A golok is a cutting tool, similar to a machete, that comes in many variations and is found throughout the Indonesian archipelago. [1] It is used as an agricultural tool as well as a weapon. The word golok (sometimes misspelled in English as "gollock") is used in Indonesia and Malaysia and (spelled gulok) in the Philippines. Both in Malaysia and in Indonesia, the term is usually interchangeable with the longer and broader parang. [2] [3] In the Sundanese region of West Java it is known as bedog.

Sizes and weights vary, as does blade shape, but the typical length is 25 to 50 centimeters. Golok tend to be heavier and shorter than parang or common machetes, often being used for bush and branch cutting. [1] Most traditional golok use a convex edge or an edgewise taper, where the blade is less likely to get stuck in green wood than flat edged machetes. The blade is heaviest in the centre and flows away in a curve to a sharp point at the tip.

Golok are traditionally made with a springy carbon steel blade of a softer temper than that of other large knives. This makes them easier to dress and sharpen in the field, although it also requires more frequent attention. Although many manufacturers produce factory-made golok, there are still handmade productions that are widely and actively made in Indonesia.

In Indonesia, the golok is often associated with the Betawi and neighboring Sundanese people. The Betawi recognize two types of golok; gablongan or bendo is the domestic tool used in the kitchen or field for agricultural purposes, and the golok simpenan or sorenam that is used for self-protection and traditionally always carried by Betawi men. The golok is a symbol of masculinity and bravery in Betawi culture. A jawara (local strongman or village champion) will always have a golok hung or tied around the waist at the hips. This custom, however, has ceased to exist since the 1970s, when authorities would apprehend those that carry the golok publicly and have it confiscated it in order to uphold security, law and order, and to reduce gang fighting. [4]

The golok style is noted for being the pattern for British Army-issue machetes used since the early 1950s. [10] 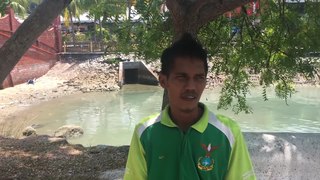 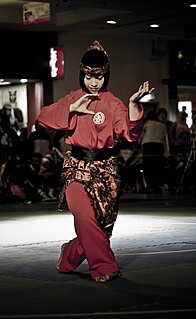 Silat Melayu, also known as Seni Persilatan Melayu or simply Silat, is a combative art of self-defence from the Malay world, that employs langkah ('steps') and jurus ('movements') to ward off or to strike assaults, either with or without weapons. Silat traced its origin to the early days of Malay civilisation, and has since developed into a fine tradition of physical and spiritual training that embodies aspects of traditional Malay attire, performing art and adat. The philosophical foundation of modern Malay Silat is largely based on the Islamic spirituality. Its moves and shapes are rooted from the basis of Silat movements called Bunga Silat, and Silat performances are normally accompanied with Malay drum assembles.

Pantun is a Malay oral poetic form used to express intricate ideas and emotions. It is generally consists of even-numbered lines and based on ABAB rhyming schemes. The shortest pantun consists of two lines better known as the pantun dua kerat in Malay, while the longest pantun, the pantun enam belas kerat have 16 lines. Pantun is a disjunctive form of poetry which always come in two parts, the first part being the prefatory statement called sampiran that has no immediate logical or the narrative connection with the second or closing statement called isi, while sometimes it is also called as pembayang and maksud instead. 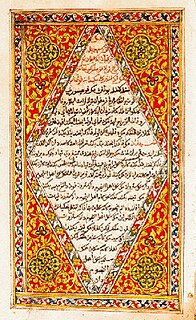 The Malay Annals, originally titled Sulalatus Salatin, is a literary work that gives a romanticised history of the origin, evolution and demise of the great Malay maritime empire, the Malacca Sultanate. The work which was composed sometime between 15th and 16th centuries, is considered one of the finest literary and historical works in the Malay language.

Malaysian and Indonesian are two standardised varieties of the Malay language, used in Malaysia and Indonesia, respectively. Both varieties are generally mutually intelligible, yet there are noticeable differences in spelling, grammar, pronunciation and vocabulary, as well as the predominant source of loanwords. The differences can range from those mutually unintelligible with one another, to those having a closer familial resemblance. The regionalised and localised varieties of Malay can become a catalyst for intercultural conflict, especially in higher education. 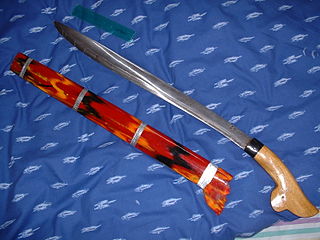 Kedahan Malay or commonly known as Orang Utara, is a sub-group of Malays that is native to Northern Malaysia and in southernmost parts of Thailand and Burma. They are among the earliest settlers in the Malay peninsula. Kedahan Malays comprised at least 15% of the total Malaysian Malay population.

Pangium edule is a tall tree native to the mangrove swamps of Southeast Asia. It produces a large poisonous fruit which can be made edible by fermentation.

A hyang is an unseen spiritual entity that has supernatural power in ancient Indonesian mythology. This spirit can be either divine or ancestral. The reverence for this spiritual entity can be found in Sunda Wiwitan, Kejawen, and Balinese Hinduism. In modern Indonesian, this term tends to be associated with gods, devata, or God. The realm where the hyangs reside is called kahyangan, the abode of gods, now a synonym for svarga or heaven in modern Indonesian and Malay. 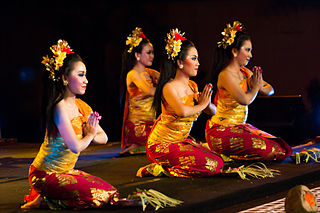 Sembah is an Indonesian greeting and gesture as a way of demonstrating respect and reverence. While performing the sembah, the person clasped their palms together solemnly in a prayer-like fashion called suhun or susuhun in Javanese; or menyusun jari sepuluh in Indonesian and Malay, and placed them in front of the chest, and moving the combined palms up to the chin, or all the way up until the thumbs touching the tip of the nose, while bowing slightly. Any of these two forms are made depending on the status of the person greeted.

Istiadat Pewaris Penjurit-Kepetangan Melayu or formerly known as Ilmu Persilatan Penjurit-Kepetangan Melayu, shortform IPPM is one of the oldest original known to date Malay martial art form or called 'Silat' in existence which has been heritage from one generation to another. Descended from the first ruler of the Malayapura Kingdom, King Adityawarman whom is also known as Seri Maharaja Diraja which to a later stage sparked the start of Minangkabau history in Pagaruyung Kingdom, Sumatra, Indonesia. These story has been greatly narrated in most of old Malay Literature including in of the most reliable sources to date called Sulalatus al-Salatin or better known as The Malay Annals (Malay: Sejarah Melayu). The manuscript begin with the stories of Wan Malini and Wan Empuk whom was presented with 3 adopted princes right after when their rice fields was magically expelling gold. These 3 princes was later mark as the kickstart for the next 3 big empires in Malay Archipelago. Those empires were the Kingdom of Majapahit, The Malacca Sultanate and the Pagaruyung Kingdom around the 12th century.

Hulubalang were the military nobility of the classical Malay kingdoms in Southeast Asia. In western sources, "Hulubalang" is roughly translated as "warlord", "commander", "general" or simply "warrior". An early literary reference to the word Hulubalang appears in the Malay Annals. It is mentioned in the text that among four senior nobles of Kingdom of Singapura (1299–1398), there was a position called Hulubalang Besar, first held by Tun Tempurung, that equivalent to chief of staff of the army, who commands several other Hulubalangs. The legendary strongman of Singapura, Badang, was among the notable Hulubalang of the kingdom, promoted to the rank during the reign of Sri Rana Wikrama.

Classical Malay literature, also known as traditional Malay literature, refers to the Malay-language literature from the Malay world, consisting of areas now part of Brunei, Malaysia, and Indonesia; works from countries such as the Philippines and Sri Lanka have also been included. It shows considerable influences from Indian literature as well as Arabic and Islamic literature. The term denotes a variety of works, including the hikayat, poetry, history, and legal works.

Kassim Ahmad was a Malaysian intellectual, writer, poet and an educator. He was also a politician in the early days of Malaya and later Malaysia.

Yaakub Isa was a Malaysian teacher, writer, scholar of the Malay language and literature.

Cerucuh is an ancient, small Malay trading boat. The first record of cerucuh comes from the 15th century Malay Annals, being used by Majapahit empire during the first Majapahit attack on Singapura (1350). Malay Annals recorded: