Homer mentions the makhaira, but as a domestic knife of no great size. [1] In period texts, μάχαιρα has a variety of meanings, and can refer to virtually any knife or sword, even a surgeon's scalpel, but in a martial context it frequently refers to a type of one-edged sword; a sword designed primarily to cut rather than thrust. [2]

The Koine of the New Testament uses the word makhaira to refer to a sword generically, not making any particular distinction between native blades and the gladius of the Roman soldier. This ambiguity appears to have contributed to the apocryphal malchus, a supposedly short curved sword used by Peter to cut off the ear of a slave named Malchus during the arrest of Jesus. While such a weapon clearly is a makhaira by ancient definition, the imprecise nature of the word as used in the New Testament cannot provide any conclusive answer.

Makhaira entered classical Latin as machaera, "a sword". The dimachaerus was a type of Roman gladiator that fought with two swords. In modern Greek, μαχαίρι means "knife".

Modern scholars distinguish the makhaira from the kopis (an ancient term of similar meaning) based on whether the blade is forward curved (kopis), or not (makhaira). [3]

Makhaira were of various sizes and shapes, being regional, and not exclusively Greek. Greek art shows the Lacedaemonian and Persian armies employing swords with a single cutting edge, but Persian records show that their primary infantry sword was two edged and straight, similar to the Greek xiphos (cf. acinaces). Greek vase painting begins to show makhairai very infrequently from c. 530 BC, though their depiction is increasingly common on 'red figure' ceramics from c. 510 BC onwards.

The makhaira depicted in artworks was single-edged, having an expanded convex portion to the cutting part of the blade towards its tip. This concentrated weight, and therefore momentum, to this part of the blade allowing a forceful cut. The shape of the blade helped to make it so the makhaira could potentially cut through bone. [4]

Despite their relatively frequent depictions in art, archaeological remains of this type of sword are rare. [5]

While Xenophon states that the xiphos was the conventional sword used by the Greek soldier of his time, he recommended the makhaira for cavalry. "I recommend a kopis rather than a xiphos, because from the height of a horse's back the cut of a machaira will serve you better than the thrust of a xiphos." (Xenophon, 12:11). [6] Archeological evidence suggests that the makhaira was more predominant in areas that were not so focused on using the phalanx, and instead focused more on cavalry. [7]

His reasoning concurs with the general practice of arming cavalry with cutting swords through the ages. Greek art along with Xenophon's further commentary suggests that the sword he intended for the cavalry was wider than the more modern sabre; more akin to the falchion or even machete.

There are examples of animals that have makhaira or machaira in their names. 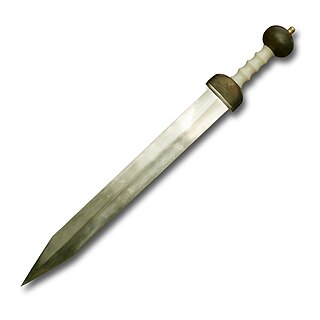 Gladius is a Latin word meaning "sword", but in its narrow sense, it refers to the sword of Ancient Roman foot soldiers. Early ancient Roman swords were similar to those of the Greeks, called xiphe. From the 3rd century BC, however, the Romans adopted a sword based on the weapons used by the Celtiberians in Hispania late into the Punic Wars, known in Latin as the gladius hispaniensis, or "Hispanic sword". 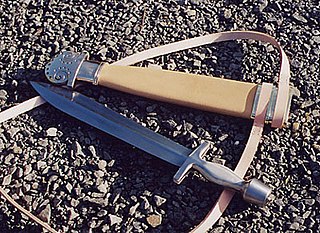 The xiphos is a double-edged, one-handed Iron Age straight shortsword used by the ancient Greeks. It was a secondary battlefield weapon for the Greek armies after the dory or javelin. The classic blade was generally about 45–60 cm (18–24 in) long, although the Spartans supposedly preferred to use blades as short as 30 cm (12 in) around the era of the Greco-Persian Wars. The xiphos sometimes has a midrib, and is diamond or lenticular in cross-section. It was a rather light weapon, with a weight around 450 to 900 grams or 1-2 lbs. It was generally hung from a baldric under the left arm. The xiphos was generally used only when the spear was broken, taken by the enemy, or discarded for close combat. Very few xiphe are known to have survived. 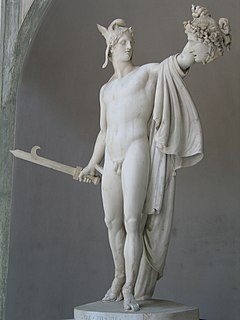 Ancient Greek weapons and armor were primarily geared towards combat between individuals. Their primary technique was called the phalanx, a formation consisting of massed shield wall, which required heavy frontal armor and medium-ranged weapons such as spears. Soldiers were required to provide their own panoply, which could prove expensive, however the lack of any official peace-keeping force meant that most Greek citizens carried weapons as a matter of course for self-defence. Because individuals provided their own equipment, there was considerable diversity in arms and armour among the Hellenistic troops.