Last updated May 19, 2021
Not to be confused with Balisong knife.
Sword

Balasiong (also spelled balacion, baliciong, or balisiong) is a Filipino sword used by Muslim Filipino ethnolinguistic groups (the Moro people) in the Southern Philippines. It is a type of kalis but differs in that the double-edged blade isn't wavy but instead slightly convex. It also tapers sharply to the tip. The hilt, like in the kalis is shaped like a pistol handle, an element known as the kakatua (cockatoo). [1] [2] 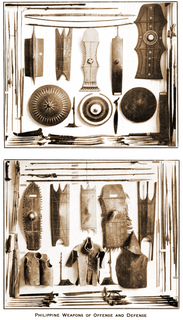 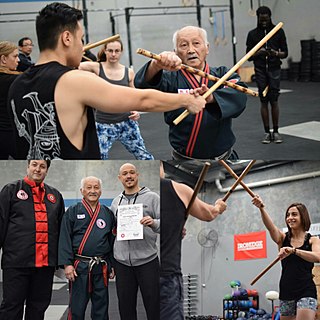 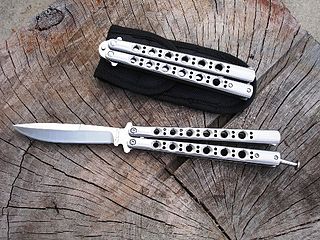 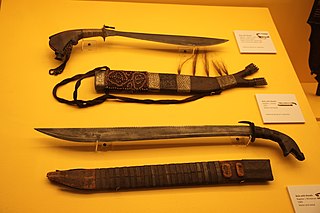 Sikaran is a Filipino Martial Art that involves hand and mostly foot fighting. As Sikaran is a general term for kicking which is also used as the name of the kicking aspects of other Filipino Martial arts, this article discusses the distinct art which is specifically practiced in the Rizal province that focuses almost exclusively in kicking. 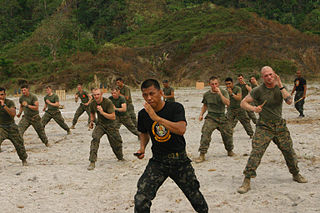 Pekiti-Tirsia Kali is a style specific to Filipino Martial Arts. Pekiti-Tirsia Kali was founded in 1897 and is the system of the Tortal family. The sole heir and guardian of this system is Leo T. Gaje Jr.. Pekiti-Tirsia is strictly a combat-oriented system, as opposed to a sport-focused fighting style. It is a fighting system that focuses on edged, impact and improvised weapons. PTK has been adopted as the preferred combative training program by elite military and law enforcement units around the world. It claims to be a very lethal fighting method for self-defence. 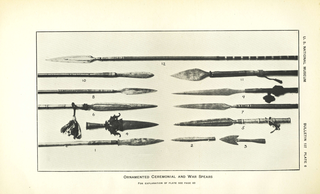 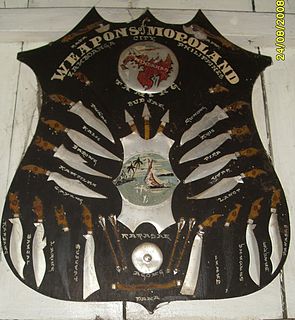 Arnis in popular culture reflects the impact that the Filipino martial arts of Arnis/Eskrima/Kali have made outside of the martial arts community. The three terms are roughly interchangeable and for the purpose of convenience, the term Arnis will be used throughout the article. These arts emphasize weapon-based fighting with sticks, blades, improvised weapons and hand-to-hand fighting which is formally known as Mano Mano or Pangamut. Because of this training with live weapons, elements of Arnis have made an impact in film, video games, television, and comic books. Arnis is often used to train actors and stuntmen how to handle similar weapons for use in movies. 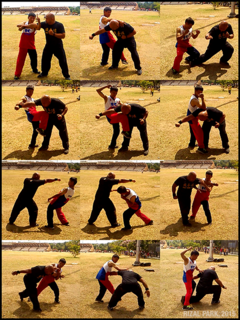 Suntukan is the fist-related striking component of Filipino martial arts. In the central Philippine island region of Visayas, it is known as Pangamot or Pakamot and Sumbagay. It is also known as Mano-mano and often referred to in Western martial arts circles of Inosanto lineage as Panantukan. Although it is also called Filipino Boxing, this article pertains to the Filipino martial art and should not be confused with the Western sport of boxing as practiced in the Philippines. In recent times, suntukan has become a generalized term for any brawls in the Philippines, with the term panantukan becoming more frequently used to denote the actual martial art.

The baston is one of the primary weapons of Arnis and Filipino martial arts. It is also known as yantok, olisi, palo, pamalo, garrote, caña, cane, arnis stick, eskrima stick or simply, stick. 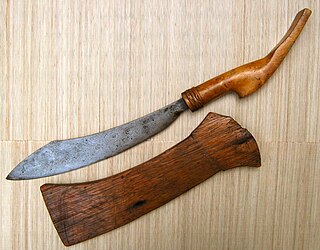 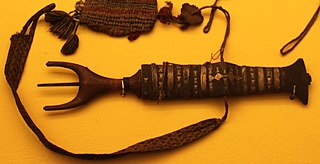 Balarao, also known as "winged dagger", is a Filipino dagger used throughout the pre-colonial Philippines. It is unusually shaped, with a leaf-like blade and a finger-fitting grip consisting of two horn-like projections at the pommel and no guards. The tang also protrudes at the back. The dagger is a status symbol among nobility and warriors and is usually finely-worked with precious metals, ivory, and horn.