Flint is located in north-east Wales, adjoining the estuary of the River Dee, to the north of the town of Mold. Across the estuary, the Wirral can be seen from Flint and views to the south of the town include Halkyn Mountain. As the crow flies, Flint is located less than 12 miles from the English urban area of Liverpool, and even closer to its metro area. However, the two estuaries in between make the distance travelling on land almost twice as long.

The name refers to the stony platform on which the castle was built, and was first recorded in 1277 in the French form le Chaylou (cf modern French caillou, "gravel"). [4]

Edward I began to build Flint Castle in 1277, during his campaign to conquer Wales. Both castle and town were attacked by the forces of Madog ap Llywelyn during the revolt of 1294–95; the defenders of the town burnt it in order to deny its use to the Welsh.

Richard II was handed over to his enemy Henry Bolingbroke in the castle in 1399. As a consequence, it is the setting for Act III, Scene III of the Shakespeare play Richard II. The castle was the first of Edward I's 'iron ring' of royal castles to be built in Wales, and the design served as the basis for larger castles such as Harlech Castle and Rhuddlan Castle. Owain Glyndŵr unsuccessfully assaulted it at the commencement of his revolt in 1400.

The town did not have a wall, but a protective earthen and wooden palisaded ditch. The outline of this remained visible in the pattern of streets until the mid-1960s, and the medieval boundary can still be traced now. This can be seen in John Speed's map of Flintshire.

In 2001 only 18% of the local population identified as Welsh, although this census controversially had no "Welsh" tick box. [7]

In the census of 2011, 57.1% stated they had Welsh, or Welsh and other combined, identity. [8] Many people in Flint have some knowledge of the Welsh language, although competence varies. Implementation of the European Union's freedom of movement provisions has led to a noticeable increase in the numbers of Polish-language speakers in Flint. Several retail businesses display information in Polish as well as in English and Welsh and the town has a number of Polskie sklepy (Polish shops) specialising in Polish products.

The Flint accent is frequently misidentified with that of Liverpool, although it has arisen in fact as a unique blending of the speech patterns of the area's Welsh speakers, earlier Irish settlers, and the residents of nearby Cheshire, Wirral, and the wider Merseyside region. [9]

There are several songs associated with Flint. [10] The most widely sung is "The Yard". Another popular song is "Fifty German bombers over Flint", which tells the story of a wartime bombing raid over nearby Liverpool that accidentally targeted the town of Flint instead. Verses describe the arrival of the bombers over Flint, and how they were shot down by the "Bagillt Navy". Eventually, the ill-fated German aircrew were fished out by the "Greenfield Fishers". The song is often sung in a drunken, friendly manner to the accompaniment of much hand clapping and revelry.

Flint railway station lies on the North Wales Coast Line and is served by Transport for Wales services from Manchester Piccadilly to Llandudno. A north-south service between Cardiff and Holyhead also calls, as do some Avanti West Coast services between London Euston and Holyhead. [11] Bus services are operated by Arriva Buses Wales.

Flint once had its own low-powered television relay transmitter, designed to provide improved coverage of Welsh channels in an area that would otherwise receive only English television signals. Since 2009, signals have been transmitted digitally from Storeton transmitting station on the Wirral.

Perhaps one of the town's most striking images, in addition to the castle, is the group of three tower blocks of flats near the town centre. The first two blocks were built in the 1960s and named Bolingbroke Heights and Richard Heights, with a third, Castle Heights, added shortly afterwards.

Flint's football team is Flint Town United. They play in the Cymru Premier, the top tier of Welsh football. Nicknamed "the Silkmen", they play their home games at Cae-y-Castell.

Brian Fell's sculpture footplate [12] can be seen at Flint railway station. Initially it was thought to be an imitation of the famous Monty Python foot drawn by Terry Gilliam.

The library, leisure centre (renamed in 2012 as the Jade Jones Pavilion), and the town centre have all been renovated. Flint Retail Park has also expanded and Flint is the only town in Flintshire to have a Sainsbury's supermarket.

A lifeboat station was established in Flint in 1966, operated by the RNLI. [13] 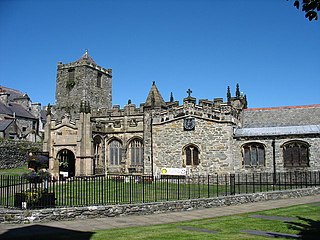 Holyhead is the largest town and a community in the county of Isle of Anglesey, Wales, with a population of 13,659 at the 2011 census. Holyhead is on Holy Island, bounded by the Irish Sea to the north, and is separated from Anglesey island by the narrow Cymyran Strait and was originally connected to Anglesey via the Four Mile Bridge.

Hawarden is a village, community and electoral ward in Flintshire, Wales. It is part of the Deeside conurbation on the Wales-England border and is home to Hawarden Castle. In the 2011 census the ward of the same name had a population of 1,887, whereas the community of the same name, which also includes Ewloe Mancot and Aston had a population of 13,920. The scenic wooded Hawarden Park abuts the clustered settlement in the south. Hawarden Bridge consists of distribution and industrial business premises beyond Shotton/Queensferry and the Dee. The west of the main street is called The Highway, its start marked by the crossroads with a fountain in the middle, near which are public houses, some with restaurants.

Flintshire is a county in the north-east of Wales. It borders England to the east, Denbighshire to the west and Wrexham County Borough to the south. It is named after the historic county of the same name which has notably different borders. Flintshire is considered part of the Welsh Marches and formed part of the historic Earldom of Chester and Flint. The county is governed by Flintshire County Council which has its main offices in County Hall, Mold.

Colwyn Bay is a town, community and seaside resort in Conwy County Borough on the north coast of Wales overlooking the Irish Sea. It lies within the historic county of Denbighshire. Eight neighbouring communities are incorporated within its postal district. Established as its own separate parish in 1844 with just a small grouping of homes and farms where the community of Old Colwyn stands today, Colwyn Bay has expanded to become the second-largest community and business centre in the north of Wales as well as the 14th largest in the whole of Wales with the urban statistical area, including Old Colwyn, Rhos-on-Sea, and Mochdre and Penrhyn Bay, having a population of 34,284 at the 2011 census.

Holywell is a market town and community in Flintshire, Wales. It lies to the west of the estuary of the River Dee. The community includes Greenfield. 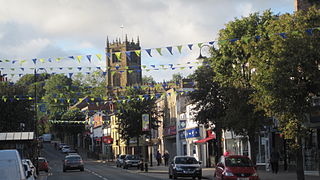 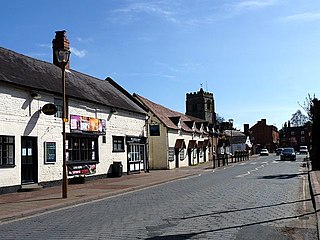 Chirk is a town and community in Wrexham County Borough, Wales, 10 miles south of Wrexham, between it and Oswestry. At the 2011 census, it had a population of 4,468. Historically in the traditional county of Denbighshire, and later Clwyd, it has been part of Wrexham County Borough since a local government reorganisation in 1996. The border with the English county of Shropshire is immediately south of the town, on the other side of the River Ceiriog.

Mostyn is a village and community in Flintshire, Wales, and electoral ward lying on the estuary of the River Dee, located near the town of Holywell. It has a privately owned port that has in the past had a colliery and ironworks and was involved in the export of commodities, and in present times services the offshore wind industry and ships the wings for the Airbus A380 which are manufactured at Broughton.

North Wales is a region of Wales, encompassing its northernmost areas. It borders Mid Wales to the south, England to the east, and the Irish Sea to the north and west. The area is highly mountainous and rural, with Snowdonia National Park and the Clwydian Range and Dee Valley, known for its mountains, waterfalls and trails, wholly within the region. Its population is concentrated in the north-east and northern coastal areas, with significant Welsh-speaking populations in its western and rural areas. North Wales is imprecisely defined, lacking any exact definition or administrative structure. It is commonly defined administratively as its six most northern principal areas, but other definitions exist, with Montgomeryshire historically considered to be part of the region.

Delyn is a constituency represented in the House of Commons of the UK Parliament since 2019 by Rob Roberts, who was elected as a Conservative, but currently sits as an Independent following sexual harassment allegations.

Deeside is the name given to a predominantly industrial conurbation of towns and villages in Flintshire and Cheshire on the Wales–England border lying near the canalised stretch of the River Dee that flows from neighbouring Chester into the Dee Estuary. These include Connah's Quay, Shotton, Queensferry, Aston, Garden City, Sealand, Broughton, Bretton, Hawarden, Ewloe, Mancot, Pentre, Saltney and Sandycroft. The population is around 50,000, with a plurality (17,500) living in Connah's Quay.

Flint railway station serves the town of Flint in Flintshire, North Wales. It located on the North Wales Coast Line and is managed by Transport for Wales, who provide most of the passenger trains that call here. There are certain Avanti West Coast services that serve the station.

Bagillt is a market town and community in Flintshire, Wales. The town overlooks the Dee Estuary and is between the towns of Holywell and Flint. At the 2001 Census the population was recorded as 3,918, increasing to 4,165 at the 2011 census. The community also includes the villages of Walwen and Whelston. Landmark locations such as Gemma Rushes bath.

Flint Castle in Flint, Flintshire, was the first of a series of castles built during King Edward I's campaign to conquer Wales.

The Flint television relay station was an analogue television transmitter housed on a residential tower block called Bolingbroke Heights at the centre of the Town of Flint in North Wales. Flint is situated on the estuary of the River Dee which forms part the Wales border with England.

Greenfield is a village in the community of Holywell, Flintshire, north-east Wales, on the edge of the River Dee estuary. At the time of the 2001 census it had a population of 2,741, which remained unchanged in the 2011 census.

Flint Town United Football Club is a football club based in Flint, Flintshire, Wales, that competes in the Cymru Premier, the highest tier of Welsh football. Nicknamed "the Silkmen", they play their home games at Cae-y-Castell also known as the 'Essity Stadium' following their sponsorship deal. "The Castle Field", Flint.

Flint Mountain is a small village seated in Flintshire, North Wales, approximately 12 miles west of the city of Chester, midway between Mold and Flint, and situated just off junction 33 of the A55 North Wales Expressway. Points of interest include the Coach and Horses pub, and recently developed football club Flint Mountain FC. In mid-2006, the population of Flint Mountain was 1,958.

Flint Town Hall is a municipal structure in the Market Square, Flint, Flintshire, Wales. The town hall, which is the meeting place of Flint Town Council, is a Grade II listed building.

Wikimedia Commons has media related to Flint, Wales .
This page is based on this Wikipedia article
Text is available under the CC BY-SA 4.0 license; additional terms may apply.
Images, videos and audio are available under their respective licenses.